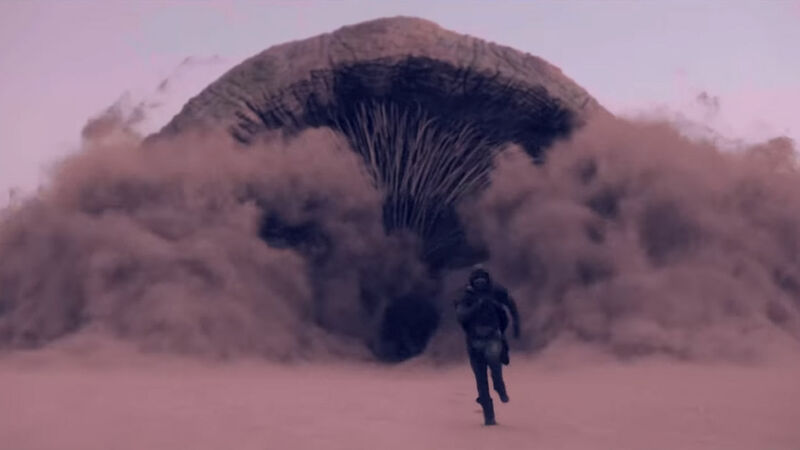 Forget Timothée Chalamet, Zendaya and all the rest, the sandworms of the planet Arrakis are the real stars of Dune. They live in (and dine on) sand. Water is deadly to them, while their larvae produce a drug called ‘melange’ – better known to you, me, and everyone in the Duneiverse as ‘Spice’. Every adaptation of author Frank Herbert’s 1965 novel has told of the giant beasts, said to be “up to 450 metres long”, with impenetrable armour. Denis Villeneuve’s 2021 adaptation is no exception.

The director recently spoke of the yearlong process that was undertaken specifically to imagine the creatures. “We talked about every little detail that would make such a beast possible,” he said. “From the texture of the skin, to the way the mouth opens, to the system to eat its food in the sand. It was a year of work to design and to find the perfect shape that looked prehistoric enough.” The good news is that, in Dune’s most recent adaptation, the sandworm is the star of the show once more.

But what we’re interested in today is what scientific reality the sandworm is rooted in. After all, there are few creatures as important to our planet as these wriggly strings of goo. The humble earthworm has been tending the earth’s soil for over 120 million years. The Greek philosopher Aristotle once called them “the intestines of the soil”. Charles Darwin, in an attempt to understand whether they could hear, would ask his son to play bassoon for them.

What we need is a worm expert. And in Rhonda Sherman, director of the Compost Learning Lab at North Carolina State University – and the author of The Worm Farmers Handbook – we’ve got one!

“I love worms!” she says. “I think they’re amazing. But what’s most amazing about them is their poop. For almost 29 years now I’ve been teaching about vermicomposting, which is the process by which earthworms are used to convert wastes into a material called vermicompost. I’m interested in harnessing earthworm poop to do useful things. Their poop is amazing. It has incredible plant growth, it can suppress insects and diseases that attack plants, all sorts of amazing things!”

Out the gates, we’ve already established that whereas the sandworm is responsible for the production of ‘spice’ – the Duneiverse’s most desired substance, offering the ingester a longer lifespan, heightened awareness and, in some cases, the ability to see the future – earthworms create a substance that is valuable too. “In the US, a cubic yard of regular compost probably sells for $30,” says Rhonda. “Worm poop can sell for up to $1200. It’s probably not enough for rival civilisations to be fighting over, but given how much it can increase crop yields, it’s worth fighting for…”

Can Worms Live in Sand and Grow Big?

Rhonda explains that there are about one million species of worm in existence today – and around 2,700 types of earthworms. She explains how earthworms don’t have lungs but breathe through their skin, meaning that their skin has to be moist, meaning that they couldn’t exist in a pure sand environment, meaning that there are no worms living in sand dunes, meaning that everything Arrakis has ever taught us is a big fat lie. Which is disappointing. “But they’re in Egypt,” says Rhonda. “Cleopatra loved worms. She declared them to be sacred and established laws to protect them, because she knew how they toiled the Nile valley. In Cleopatras time, killing a worm was punishable by death!”

The earthworm gets nowhere near the 400 metres (1,300ft) of the sandworm. “The largest ones are around 4ft,” says Rhonda, “though the Giant Gippsland earthworm, which is native to Australia, can get up to around 12ft. The problem with measuring worms is that when they move, they contract, meaning that there’s a big difference between the resting worm and when they’re moving. That’s why earthworm scientists are kind of sceptical when someone reports an earthworm is longer than about 3 or 4ft.” More lies!

There are ‘Cannibal’ Worms

And, unlike the sandworms, earthworms aren’t carnivorous. “Though there is a creature called the hammerhead worm, or broadhead planarians, some of which prey on earthworms. They’re only really called a worm because of the shape of them.” Rhonda invites us to Google what they look like, and NOW WE WILL NEVER SLEEP EVER AGAIN. Don’t do this if you are eating.

Sandworms are covered in armoured plates. They can live for millennia. Earthworms aren’t very durable at all (“They’re mostly water”), capable of living for seven or eight years, though most don’t make it anywhere near that long. “They just have too many predators.” But both sandworms and earthworms don’t have eyes! “But earthworms do have sensors,” says Rhonda, “so they sense light. They’re very sensitive to light, it can actually paralyse them. If they come out into the light, within an hour they can be paralysed.” Not only that, but both earthworms and sandworms are sensitive to vibrations. As we learn in Herbert’s lore, a traveller in the desert must learn to ‘walk without rhythm’, otherwise the sandworm will think they are prey.

“The difference is,” says Rhonda, “for earthworms, vibrations mean predators. Take, for example, moles — they love earthworms. And moles will make a vibration as they move in the soil. But humans have known that worms respond to vibrations for years and years. Worm charming, or ‘grunting’, is used to bring worms to the surface by intentionally creating a vibration using a stick or a saw. It’s a competitive sport in some places, and how humans obtain worms for fishing! You have to be careful when you’re using worms to make this super valuable poop called castings. You wouldn’t want to put the worms next to a vibrating piece of machinery, or it would really upset them.”

Perhaps we would be best comparing the biology of the sandworm with that of the Mongolian death worm – or the Olgii-khorkhoi (‘large intestine worm’) – of the Gobi Desert. The latter was described thus by Mongolian Prime Minister Damidinbazar in 1922, “It is shaped like a sausage about 2ft long, has no head nor leg and is so poisonous that merely to touch it means instant death. It lives in the most desolate parts of the Gobi Desert.” Trouble is, while there have been many alleged sightings, nobody has ever captured one, and the species is considered a cryptid.

Perhaps there’s an abundance of the psychotropic ‘Spice’ in the Gobi Desert?

Dune is out now.

To read more about Dune and its far-reaching influence on science-fiction movies, check out the article below which contains more from our interviews with director Denis Villeneuve and the cast of Dune.