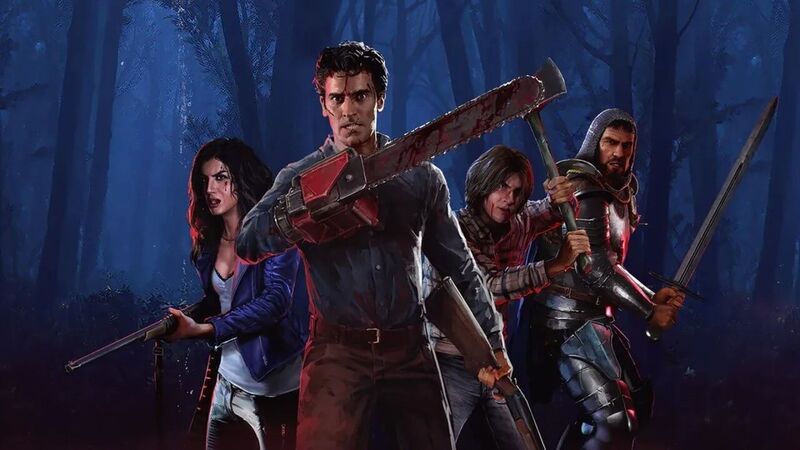 On May 13, Saber Interactive released Evil Dead: The Game across a variety of platforms. Similar to the gameplay of popular horror game Dead By Daylight, it’s an asymmetrical multiplayer game with both co-op and PvP combat, allowing players to take on the role of survivor or demon and face off against each other in a variety of different maps. For me (a die-hard fan of the Evil Dead franchise, a true Deadite till the day I die and finally enlist in the Army of Darkness), the game is an absolute blast.

It’s tough to capture the magic of Evil Dead, a series of films that combines nightmarish practical effects, slapstick comedy, and a beautifully unhinged performance from Bruce Campbell to make something truly unique, but this game does a great job. It features the forest, the iconic cabin in the woods, Ash’s chainsaw and boomstick, a mix of characters from the films and the tv series Ash Vs. Evil Dead—and did I mention you can play as a damn Kandarian Demon?! Just thinking about it makes me want to crack open my digital Necronomicon and get to reciting the unholy texts within.

To be perfectly honest, I’m a little bit surprised the game turned out as good as it did! It’s tricky to adapt a story to a new medium—whether that’s turning Andrew Lloyd Weber’s feline fever dream into a film or dragging yet another ‘90s romcom onto the Broadway stage—and this seems to be doubly true for adapting anything into a video game. Though many have tried over the years to varying degrees of success, it’s never easy to take a horror blockbuster from the big screen to the intimate, interactive world of gaming.

As the saying sort of goes, those who do not learn from horror game history are doomed to repeat it (and keep making terrible games). So, lest we fail to learn from those who came before us, let’s look at some of the most notably frightening failures and scary successes out there and try to answer the question: what makes a truly excellent horror movie game?

First, let’s take a look at what doesn’t work:

You know what Tobe Hooper’s groundbreaking slasher film, heralded for its gritty realism and unflinching visuals really needs? A clunky, pixelated video game adaptation for the Atari 2600. What’s that, you say? No one asked for that? Not even one? Well, TOO BAD, because we got it anyway. It’s a fun idea to let gamers play as the iconic killer Leatherface, but in this game he’s just sort of a blue blob with the suggestion of a face on top. Is that face even leather? It’s impossible to tell with those crisp 1980’s graphics. This game could have been good if it came out at a different time, but sadly the technology just wasn’t a match for the ambitious premise. It’s less of a chainsaw massacre and more of a walking simulator where you steer a guy around a field.

The 90s have been coming back in a big way lately. Butterfly clips and flared jeans abound everywhere you look. Unfortunately, there are some things that should stay in the ‘90s, like this ill-conceived adaptation of Francis Ford Coppola’s Gary Oldman vampire vehicle. The film was praised for its incredible visuals, its expert cinematography and brilliant use of light and shadow. So naturally, it had to be adapted into a generic platformer with grating sound design and controls so broken it nearly renders the game unplayable. If there was any overlap between Coppola fans and die-hard gamers desperate to play out the action of his Dracula adaptation on the NES, this game would probably make that one guy really sad. Frankly, it bites.

If you watched Jaws and, instead of thinking “Guess I’ll never go swimming again,” you thought, “Hell yeah, it looks pretty sweet to be a man-eating shark,” then you’re probably the target audience for this game. It’s not a bad premise: an RPG where you get to play as the iconic shark and swim your way around an open world ocean, chomping and bopping along to that classic “dun dun” as much as you please. Unfortunately, the game doesn’t follow through on its promise of bloody, shark-y fun. The visuals are decent, but are overshadowed by a ridiculous story and a whole lot of bugs. The controls make any of the shark’s moves extremely difficult to perform, including biting, which some may argue is Jaws’ main move. Its name is “Jaws.” Biting is, like, its whole deal. If your Jaws game can’t offer a satisfying sharkbite experience, then it’s probably time to pack it in.

“I want to play a game,” but… not this one. The Saw franchise has gotten a bit bloated at this point; the brilliant original film spawned an excess of sequels and spin-off properties, including a few video games. In a pleasant surprise, the first Saw game, 2009’s Saw: The Video Game, was well-received. Unfortunately, its sequel took any goodwill generated by the first game and shoved its metaphorical head into a metaphorical reverse bear trap, snapping its metaphorical jaw in two and rendering it completely unrecognizable (metaphorically). Quick time events break up the tension and suck any horror out of the gameplay. The puzzles are repetitive, and the levels are poorly designed. Perhaps it’s meant to be a bit of meta commentary, and the game itself functions as a kind of Jigsaw-style trap that the player must complete in order to free themselves from the crushing boredom… but it’s more likely that a rushed development schedule and inability to learn from what made the first game work cut this game’s potential for success off at the knee.

So when has it actually worked out for a developer to adapt a horror film into a video game? A few prominent examples come to mind, which managed to capture the best qualities of their source material while still bringing something new and enjoyable to the table.

This game has no right to be as good as it is. A video game based on John Carpenter’s classic science fiction horror about a group of researchers in Antarctica coming face to face with a deadly, shapeshifting alien life form sounds like a disaster waiting to happen. With nail-biting, claustrophobic tension and some of the most celebrated practical effects in horror film history, it’s a pretty tough act to follow in just about every way. This third-person-shooter survival horror strives to follow it anyway, and actually succeeds. The game’s story functions as a sequel to the film, following a US Special Forces captain sent to Antarctica to investigate what became of the original research team. Because it is not trying to be a retread of the original film, instead opting to follow in its footsteps, the game manages to successfully capture the essence of the movie while standing on its own.

The Thing (2002) takes one of the film’s best sources of tension—the mounting sense of paranoia and mistrust among the central characters as they wonder who is human and who is the creature hiding in plain sight—and turns it into a game mechanic. The “trust system” determines whether or not the NPCs will follow the player character’s orders, and is based on whether they believe him to be human, or an alien creature in disguise. Trust is broken down into four levels: Red, Amber, Green, and 100%. If the trust level dips into the red zone, the NPCs will attack in an attempt to protect themselves. The player’s actions can impact this trust level in a variety of ways, and they must be careful about how they treat the characters around them in order to maintain that trust. This mechanic, combined with excellent graphics and sound design, creepy creatures, and tight, action-packed pacing result in an experience that John Carpenter himself gave a stamp of approval.

If you’ve ever wanted to try your hand at solving Jigsaw’s terrifying traps but don’t want to, you know, die about it, then the 2009 Saw video game might just be for you! Not to be confused with the aforementioned disastrous sequel, this game actually gets a lot right about the franchise. It’s about the mystery, it’s about the horror of losing control and being thrust into a deadly, unfamiliar environment, and, of course, it’s about the traps. The game follows Detective David Tapp as he wakes up in an abandoned asylum, placed there by Jigsaw who is determined to teach him to “appreciate his life.” Fans of the franchise will recognize several of the torture devices used, including the pendulum from Saw V and shotgun collar from Saw III, but the game also includes several completely original traps that Leigh Whannel and James Wan helped design. It’s not a perfect game, but it features lots of gore, fun puzzles, and Tobin Bell rasping out instructions and warnings in his trademark Jigsaw voice.

Alien: Isolation is arguably the most successful translation of a film to a video game made so far. Critically-acclaimed and the recipient of several “Game of the Year” awards on its release, Isolation functions as a sequel to the original film. Set fifteen years after the events of Alien, the game’s story centers around Ellen Ripley’s daughter, Amanda, who is investigating her mother’s disappearance. Rather than emphasizing action in the style of Aliens, the game emphasizes pure survival horror as Amanda must hide from and outsmart the titular Alien in order to stay alive. Akin to other survival horror games like Amnesia: The Dark Descent, the goal is not to defeat the Alien in a blaze of heroic glory. The goal is to survive. The Xenomorph’s sophisticated AI stalks the player through a variety of environments, and is ready to pop out with a scream-inducing jumpscare whenever you least expect it.

Sometimes a horror game doesn’t need impressive graphics or perfect functionality to be a success with the fans. It just needs to be more fun than it is trouble. This is the case with Friday the 13th: The Game, a title which employs similar asymmetric gameplay to Evil Dead and Dead By Daylight, allowing players to navigate the game as survivors or as Jason Voorhees himself in all his hockey-masked glory. It’s not an especially polished game, but it’s lovingly crafted and filled with Easter eggs that make it clear that the developers aren’t just making this game for the fans, but that they’re fans too.

When adapting a beloved piece of media into a game, it’s important to consider what fans of that media actually enjoyed about it in the first place. If they loved the gore, then making a bloodless action game is going to fall flat. If they loved the detailed imagery, then you’d better make sure you have the budget for impressive graphics. Familiarity with, and respect for, the source material goes a long way. Just like masked movie killers can sense premarital sex, fans can tell when a game is truly honoring the movie it’s based on.

In a lot of ways, the rules for making a successful video game adaptation of a beloved horror film are a lot like the rules for surviving the events of a horror movie itself. The recipe for success, or at least survival, can be boiled down to some simple core principles: Never assume you’re too smart to be in any danger, always have an escape route planned, never split up, and when all else fails, attach a chainsaw to your arm and just start swinging.