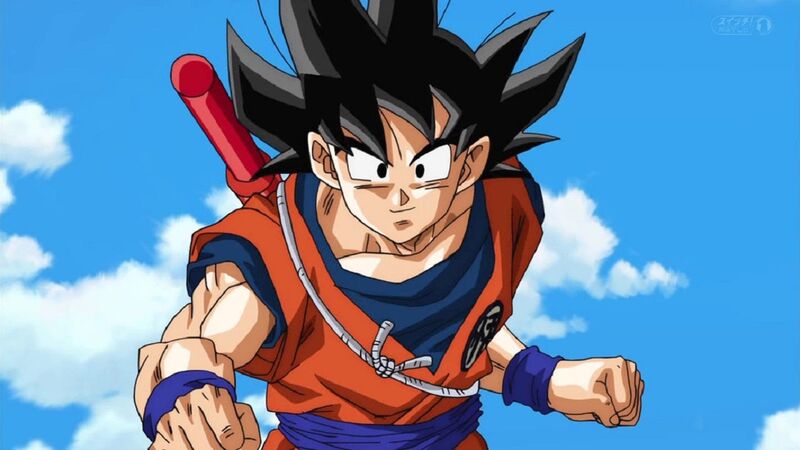 The strength of a slice-of-life anime girl is an oft-discussed subject, usually in the form of joke, jest, or haha funny image. Their power is immeasurable! Reality-warping clown girls attending average high schools, masquerading as average high schoolers. They may be far stronger than any IRL human…

…but are they stronger than Goku?

By properly quantifying their strength using Dragon Ball’s own “power level”-based measuring system, I hope to uncover the answer to this musclebound mystery.

Power levels as a concept were first introduced to the franchise as early as the original 1985 Dragon Ball manga, in which Goku learns how to sense “ki”. It isn’t until Frieza and his crew bust in with the world’s most banging monocles—their ki-detecting scouters—that the term “power level” is introduced.

We will assess the results of our battles based on Goku’s highest official power level, which the Dragon Ball wiki marks at “around 10 million” during the Babidi Saga. According to Daizenshuu 7: Dragon Ball Encyclopedia, in order for someone to sustain hits from their opponent without taking damage, they must possess twice the power of whoever they’re fighting. So, for any of these girls to truly destroy Goku, their power levels are gonna have to clock in at around 20 million. However, a fight should also be assessed based on speed, strength, and technique. It’s not just enough to be able to take what Goku dishes out—they’re gonna also have to do some dishing of their own.

Now let’s get down to business and decide who’s winning and who’s getting wiped off the face of the earth.

Yuu Kashima has something that many others on this list cannot claim to have. The biggest strength stat? Hardly. The highest skill? Not even a little. However, Yuu Kashima is in possession of something far greater than strength or skill.

Yuu Kashima has an army. Specifically, an army of teen girls. The most dangerous kind of army.

This infinite barricade of innocents swarming her at all times is sure to keep good-hearted Goku from landing a single hit, blessing Yuu with the power of Perfect Defense. Though her personal power level isn’t nearly high enough to take Goku on her own, the battle is sure to last an annoyingly long time…

…Unless her personal power level IS high enough.

Now, Yuu has the entire female population of Roman High School at her defense. Though we don’t know the exact demographics, we know that it’s a “large co-ed school.” For fun, let’s say it has the same class size as Inagakuen Public High School in Saitama, with a student population of around 2,700. If we decide to assume that half the population is female, that’s 1,350 students in Yuu’s army. More importantly that on its own is a power level of 13.5 million. Combined with Yuu’s base power level, that brings her score up to 18.5 million, just shy of the double she would need to completely shrug off Goku’s attacks. Again, I will remind you that having a lower power level doesn’t necessarily mean you lose the fight.

Though it will certainly be a struggle for Yuu, she has one final advantage over Goku: she’s a handsome woman, and there is nothing in this universe stronger than a handsome woman.

Yuuko exists in both a realm of power and one of misery. As unlucky as she is unkillable, Yuuko is Schrodinger’s Funny Anime Girl. We could reason that Yuuko’s power level is easily in the 20 millions thanks to how much damage she takes on a daily basis with absolutely zero consequence.

The real question is… can she dish it out? She’s easily crushed at arm wrestling, nearly killed by the sheer shame of telling one bad joke, and has lost her shoes to both a car and a dog simultaneously. It’s entirely possible that this fight would end up as a complete and total stalemate. Neither Goku nor Yuuko could land a hit but for entirely different reasons.

RESULTS: No victor. They’re forever locked in this prison of their own making.

Rena Ryuugu (Higurashi When They Cry)

Okay look, it may be a bit of a stretch to call Higurashi When They Cry a “slice of life.” But what is this horror-visual-novel-turned-anime about if not, at the end of the day, how chill it is to live in a small town with your best buds? And you know what—spoilers—Nichijou is on this list. Are we gonna say Nichijou doesn’t count as a slice of life because one of the characters is a robot? Hinamizawa Syndrome? Who cares about Hinamizawa Syndrome! Who cares about time loops and being reincarnations of gods and curses and a mass execution of an entire village? In the first episode they go to school and play card games together! Is that not good enough for you? Is that not slice-of-life enough for you? This is a wholesome slice-of-life comedy anime! With some blood! And some heavy-handed political metaphors! They go to a summer festival together! It’s about the power of friendship! Just skip the first five minutes of the first episode and it’s fine! Okay? Okay are we fine? Can we agree then that Higurashi can count as a slice-of-life anime? Okay? Okay great!

Kaguya is an interesting character to assess. Though her greatest asset is considered to be her intelligence, she’s not lacking in physical power. As a member of the archery club, she’s remarkably strong at a physical level (33lb draw on the bow she uses) and is the reigning arm wrestling champion of the student council. However, all that being said… she has the constitution of a Victorian literature woman about to die from night brain or drawing-room anguish. She’s prone to fainting at the slightest bit of distress, is sensitive to loud noises, and is often seen on the verge of a heart attack. With these ailments, Kaguya’s raw power level might clock in at just under Goku’s 10 million. But—as we must always remember—these battles aren’t determined by power level alone. If she can finish the fight in under ten minutes, she’s a guaranteed winner. Her experience in playing 5d chess in the battlefield of love has honed her ability to play 5d chess on an IRL battlefield. Before Goku has time to think, she’s come up with a plan of attack and at least 30 other plans of attack in case any step of her initial plan fails.

RESULTS: Kaguya blasts Goku with one “how cute” and it’s all over for him.

Do you remember when Keep Your Hands Off Eizouken! was airing and you couldn’t go two seconds scrolling on Twitter without encountering someone with a Kanamori profile pic? Yeah, each one of those gave her a boost in power. On top of this, each one of her individual teeth contain the strength of one mid-class Saiyan. She wields this power with a great brutality, such as when she busts through a wall like its paper. Not to mention, Kanamori has a definite height advantage. Not to shame this 5’9” king for being 5’9”, but Kanamori is 5’11” and could evaporate him in an instant. With the height alone I would put everyone’s favorite anime producer at a power level of 25 million, easily outclassing Goku.

Also she can do the Akira bike slide.

While she does carry a certain amount of power (swag, even) in each of the K-ON!?endings, the same cannot be said for the show itself. Each song she writes lowers her power score by increasingly higher amounts, so it’s unfortunate for her that she’s Ho-kago Tea Time’s main lyricist. “My Love is a Stapler”? -6,000 to her score. “Curry Then Rice”? -8,000 to her score! “FLUFFY FLUFFY TIME”???? Good lord, Mio.

However, there’s something important we have to remember:

Girls who play bass hold an incredible unknowable power. Incalculable by these rudimentary methods. Mio in particular is incredibly good at bass. Her playing is versatile and tends to utilize the entire length of her bass’s frets. These technically demanding, octave-jumping bass riffs demonstrate incredible precision in her hands and fingers. What can Goku do? Not play bass, that’s for sure.

While Sakaki is shown to be exceptional at all things physical, her personality might cause her some issues here. Though she gives off an aura of someone cool and mysterious, at her core she’s kind of a dork. She’s afraid of a great deal of things including thunder, earthquakes, the mechanical guards at construction sites, and bugs. While fighting a Saiyan isn’t technically listed among her fears, we could probably assume Goku is at least as scary as a mechanical guard at a construction site. However, is fear not the greatest motivator of all?

Sakaki tries and tries again to pet cats she knows will tear her hands to shreds without even flinching. Though this mostly shows her incredible dedication to cute things, it also shows perseverance, an unbreakable will, and insane pain tolerance.

15 million power score, easily. She takes damage from Goku, but she keeps going.

They’re both fundamentally kindhearted people; perhaps they could become friends afterwards. But for now…

Nadeshiko goes camping in the winter, which immediately boosts her power level to at least twice that of Goku’s. I mean, it’s just so cold. Have you ever been outside in the cold? Sleeping on the ground? Anyone who does that for fun has more power than you or I will ever know. Though I’m sure she could crush this poor Saiyan into dust, Goku is spared here as I don’t think these two would actually fight. I simply see no animosity between them. Peace and love on Planet Earth.

RESULTS: They go camping and have campfire hotpot together. Goku reflects on all this and wonders what he was even fighting for in the first place.

As we can see from this list, it really looks like Goku doesn’t stand a chance against any of these girls. A shame for the poor Saiyan! Though he may be six feet under after this onslaught, I hope he can continue to grow from this. Maybe after some more training he can defeat some of the girls in a rematch. I would say I believe in him but I’m not sure I do. After all, who are any of us against the strength of a slice-of-life anime girl?