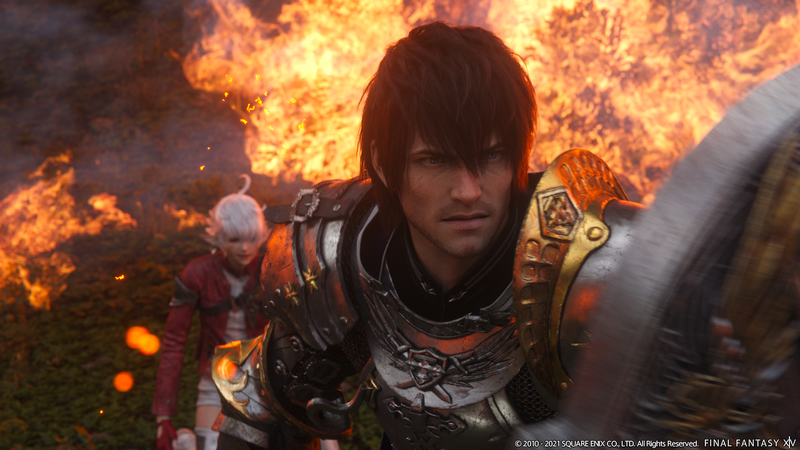 Ever since its humble origins on the Nintendo Entertainment System in 1987, the Final Fantasy franchise has drawn from the grand tradition of tabletop roleplaying games started by Dungeons & Dragons. Nearly 35 years later, with the release of the Endwalker expansion for Final Fantasy XIV, the game’s D&D roots are still present—and there’s never been a better time to dive into the world of tabletop roleplaying to investigate these connections for yourself.

While FFXIV fans might need to trade their gamepads or keyboards for pens, paper, and D&D Beyond, the roleplaying DNA shared by both of these long-running franchises will make them feel right at home.

Create your Warrior of Light or Darkness

MMORPGs like Final Fantasy XIV are the direct descendant of the tabletop gaming experience, and the process of character creation is just as engrossing across both mediums. Any FFXIV player who’s spent nearly an hour designing their perfect avatar while listening to the Crystal Theme can rest assured that creating a character in D&D is just as much fun, if not even more so.

In D&D, you’ll get to choose not just your character’s race and class, but also their alignment, background, personality traits, ideals, flaws, and bonds. While players in Final Fantasy XIV start at one of the three city-states of Limsa Lominsa, Gridania, or Ul’dah and eventually grow to fulfill their destiny as a Warrior of Light, D&D allows for more freedom, particularly if you don’t want to be so squeaky clean.

For instance, there’s nothing to stop you from creating a lawful evil D&D character who might begin her mission in Limsa Lominsa but secretly serves as an agent of the notorious Garlean Empire. If you want her to cast away notions of good and evil over the course of her adventure, she could question the beliefs that Solus zos Galvus’ regime imposed upon her and gradually switch her alignment to chaotic neutral. Eventually, she could even be pivotal in destroying the empire’s magitek machines.

Considering that the Endwalker expansion will allow players to become Warriors of Darkness to restore balance to the world, there’s no better time for FFXIV fans to experiment with a more neutral character.

Aside from alignment and backgrounds, it’s easy to recreate a FFXIV avatar using D&D’s races.

Hyur are obviously humans and Elezen are elves, while the cheerful, mini-sized Lalafell are a cross between halflings and gnomes. The Miqo’te’s cat-like ears and tails are subtle compared to the tabaxi, D&D’s feline humanoid race, but other than that both species are a close match. The Roegadyn are most similar to D&D’s goliaths, a race of giants that share the same hulking appearances and lust for life, while the Au Ra are clearly tieflings, right down to the horns and misunderstood-by-society backstory. Last but not least, FFXIV’s newest playable races—the lion-like Hrothgar and the rabbit-esque Viera—can be represented by D&D’s leonin and harengon races.

Depending on your preferred D&D race, you might want to pick up more than just the Player’s Handbook. You can purchase the tabaxi and goliath races from Volo’s Guide to Monsters, the leonin from Mythic Odysseys of Theros, and the harengon from The Wild Beyond the Witchlight.

If this sounds too overwhelming, consider starting with the fifth edition basic rules, which are available online for free on D&D Beyond. It contains more than enough races for players to improvise close analogues for the likes of Roegadyn, Hrothgar, and Viera.

Final Fantasy has been renowned for its classes, typically referred to as the job system, since the first NES game. There, the martial jobs of the Warrior, Thief, and Monk were all heavily influenced by D&D’s first edition. The game’s mages followed suit, and even had to prepare the magicks that they intended to use each day, which is a direct translation of the spell slot system still utilized in fifth edition D&D.

FFXIV features base classes and more advanced jobs on top of those, and each of these is categorized into the standard MMORPG divisions of tank, healer, and DPS. The classes are certainly a great deal more complex than those in the original Final Fantasy, but all of them still retain an analogue in the world of Dungeons & Dragons and can be recreated with the three books that contain all of D&D fifth edition’s classes and subclasses: the Player’s Handbook, Xanathar’s Guide to Everything, and Tasha’s Cauldron of Everything.

For instance, the FFXIV Paladin and the D&D Paladin are both tanks that protect weaker members of the party with holy magic, while the FFXIV Marauder and Warrior share the same high damage output as D&D’s Fighter and Barbarian. The Dark Knight job, with its ability to wield both greatswords and magic at the same time, is essentially D&D’s Eldritch Knight, while a healer like the White Mage can be recreated in D&D as a Cleric of the Life or Nature domain.

Even some of the jobs more specific to the Final Fantasy franchise—like the lance-swinging, high DPS-dealing Dragoon—can be formulated by experimenting with subclasses, feats, and items. For instance, a Battle Master Fighter with the Polearm Master feat and Boots of Springing and Striding is pretty darn close to Kain, Final Fantasy IV’s forefather of the Dragoon class.

The newest jobs coming to FFXIV with Endwalker are the Sage and the Reaper. While the full details of these jobs are still under wraps, Sages seem to blend aether technology and healing magic in a manner similar to Artificers, D&D’s steampunk inventor class. Reapers, a brooding DPS job that deals damage with a massive scythe, are reminiscent of Hexblade Warlocks as well as the Blood Hunter, a homebrew D&D class created by Critical Role’s Matt Mercer that is available on D&D Beyond.

FFXIV’s Hydaelyn features several tropes within its setting that serve as odes to the other games within the series. These range from the evil empire — a concept which first appeared in Final Fantasy II before hitting its apex with Final Fantasy VI — to the recurring importance of the moon, which acts as a prison for the primal deity of darkness, Zodiark, and will play a major role in Endwalker.

Aspiring Dungeon Masters who want to set their D&D game on Hydaelyn will need the Dungeon Master’s Guide, which contains advice for replicating the fictional worlds of other media properties along with extensive tips on worldbuilding. Dungeon Masters can also find inspiration from the multitude of adventures available for fifth edition, most of which take place in the Forgotten Realms setting. Hydaelyn and the Forgotten Realms certainly have their differences, but since FFXIV is so rooted in references to previous Final Fantasy games (which contained, once again, influences from D&D’s early editions) there is much in the way of shared coincidences between the two worlds.

The great dragon Bahamut, for instance, exists in Hydaelyn as the accursed Dreadwyrm who was contained in the red moon Dalamud, which came crashing into the world and marked the end of the Seventh Umbral Era. Conversely, Bahamut exists in the Forgotten Realms as the dragon god of justice, inspiring goodly worshippers in a virtuous manner that would shock his FFXIV counterpart. Other examples are even more obvious, and any FFXIV player who’s run through Tam-Tara Deepcroft knows of battling Galvanth the Dominator, a tentacle-faced spellcaster known as a mind flayer. These aberrations show up across the Forgotten Realms as psionic monsters with a taste for brains.

Aside from the Dungeon Master’s Guide, FFXIV Dungeon Masters might also be interested in the books Eberron: Rising from the Last War and Guildmaster’s Guide to Ravnica, both of which outline settings which are considerably more technologically advanced than the Forgotten Realms and can serve as good examples for setting a campaign within the tech-heavy Garlean Empire. Fizban’s Treasury of Dragons, which is packed to the brim with information on the winged creatures that make up half of D&D’s name, is also useful for a campaign exploring the bloody Dragonsong War, which was outlined in FFXIV’s first expansion pack, Heavensward.

Endless possibilities await
at the source of fantasy RPGs

D&D and Final Fantasy share much common ground, and above all else, both games are about experiencing rich stories and seeing characters evolve into legends. So grab your dice, prepare your character sheet, and get ready to explore the original progenitor that influenced Final Fantasy’s rich tradition of roleplaying. May you ever walk in the light of the Crystal.