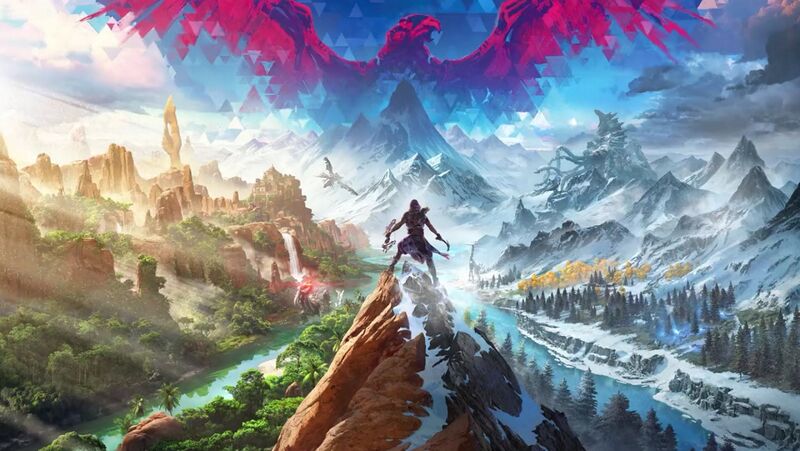 Horizon Call of the Mountain: 6 Things We Know and 3 Things We Want

During PlayStation’s June 2022 State of Play, Sony showcased several new PSVR2 titles headed to, well, the PSVR2. We got an up-close look at Lady Dimitrescu in Resident Evil Village VR, and a glimpse at slaying some zombies in NOLA with The Walking Dead: Saints and Sinners Retribution. But there was another title that caught our eye—one that had been previously announced, and we were finally getting more information on: Guerrilla Games and Firesprite’s Horizon Call of the Mountain.

We here at Fandom (with our powers combined) have deduced what we can from this trailer and have also put together a few things we HOPE to see from this VR game. So let’s dive right in:

YOU DON’T PLAY AS ALOY

In Horizon Call of the Mountain, you take on the role of Ryas, a member of the Shadow Carja who is now a prisoner of the Sundom. For those that need a refresher, the Shadow Carja are one of the many foes of Horizon Zero Dawn. They are a splinter group of the Carja, who supported the former Sun King’s war against the other tribes of the continent. So it’s definitely interesting to be stepping into the shoes of one of Aloy’s foes for the first time. But what we know about Ryas doesn’t stop there. After his imprisonment, he was spared execution in exchange for investigating a new threat to the Sundom. Overall, it will be refreshing and fun to see the world of Horizon through a new set of eyes.

While this was heavily speculated during the initial trailer, it has since been confirmed that you will run into Aloy during your VR adventures. How significant her role in this game is remains up in the air—but hopefully, she’ll come as a friend, not foe. Now that we’re playing as a member of the Shadow Carja, it makes sense for Aloy to be wary of us in this adventure. We’re hoping we’ll have the chance to work and fight alongside her… or maybe even override some machines together. (But we’ll get to that later.) Along with Aloy, we can also expect to see some familiar returning faces. Hopefully, this includes Nil. (We love you, Nil.)

THERE WILL BE CLIMBING

Listen, it’s called Call of the Mountain for a reason. There will be extensive climbing and exploring in this game. From the trailer alone, we see Ryas pull himself up a rope, jump between wooden beams, and whip out two handy dandy climbing picks, aka Ice Axes. It’s a great gameplay choice because it allows the player to vertically explore in this VR space. Which will be a great change of pace from the standard large ground traversal that non-VR video games give us. Also, we’re all WAY less likely to throw a VR controller into a TV when everything we have to do is above us.

THERE WILL BE COMBAT

Did you think Horizon Call of the Mountain would be a walk in the dystopian park? HECK NO. You’re going to get up close and personal with some machines AND fight them along the way. During the trailer, we see Ryas pull out a bow—the primary weapon of the Horizon franchise—as he faces down a Burrower, Scrapper, Glinthawk, and even—gulp—a Thunderjaw. Right now, we’ve seen only a bow used for combat, but it will be interesting to see if our climbing picks also give us any kind of melee advantage.

Horizon Call of the Mountain will feature TWO different game modes: Story Mode and River Ride. In this immersive experience, players can partake in a VR river ride through the world of Horizon. Additionally, you can share the experience with friends via your connected PSVR2 display! But don’t think it’s all sunshine and metal shards. You never know who or WHAT may unexpectedly join your river ride journey. If the Universal Studios Jaws Ride or Disney’s Jungle Cruise have taught us anything, it’s that you should always keep a watchful eye on the waters around you.

They say you shouldn’t judge a book by its cover. However, you CAN judge a game by its cover art (or at least get a bit more information about the game from it). From the Horizon Call of the Mountain cover art alone, we see our boy Ryas, holding a bow in one hand and his climbing pick in the other—showcasing the game’s dual combat and climbing elements. But there are also a few other interesting things of note. We see several different biomes ranging from the desert and jungle to some snowy forests and peaks. Speaking of snow, it’s hard NOT to notice the big HADES-esque Cauldron machine chilling there on the right. Will we get to explore a Cauldron, full of brutal machines wanting to kill us? Survey says: probably!

Okay, now we get to venture into the Speculation Zone. While we didn’t see anything outside of climbing and combat in the trailer, hopefully players will be able to override and mount machines like we’ve been able to do in Horizon Zero Dawn and Horizon Forbidden West. This would make the Horizon VR experience truly complete. Seeing a Grazer in the trailer? Cool! Being able to RIDE a Grazer? OUR GAMER DREAM. PLEASE let us have the option, Guerilla Games! Don’t let Aloy have all the machine-riding fun!

WANT: LET US CLIMB A TALLNECK

On the subject of riding machines, there is one machine experience all fans want: climbing and seeing the world from atop a Tallneck. Look, this game is BUILT for this experience. What do you have to do to tap into a Tallneck? CLIMB IT… which is what this game is all about! Can you imagine standing with Aloy, seeing the world of Horizon from a Tallneck? It brings tears to our eyes just thinking about it. Take our money, PlayStation!

We can sit here and talk Horizon Call of the Mountain all we want. But we can’t play it until we have a PSVR2… which currently does not have a release date OR price point. While we did get a complete list of specs at CES 2022, the release of the PSVR2 has been a mystery. Current rumors point to a potential Holiday 2022 release, but with how difficult it STILL is to get a PS5, it’s not out of reach to see the PSVR2 pushed to Holiday 2023. A very merry VR-mas, everyone!