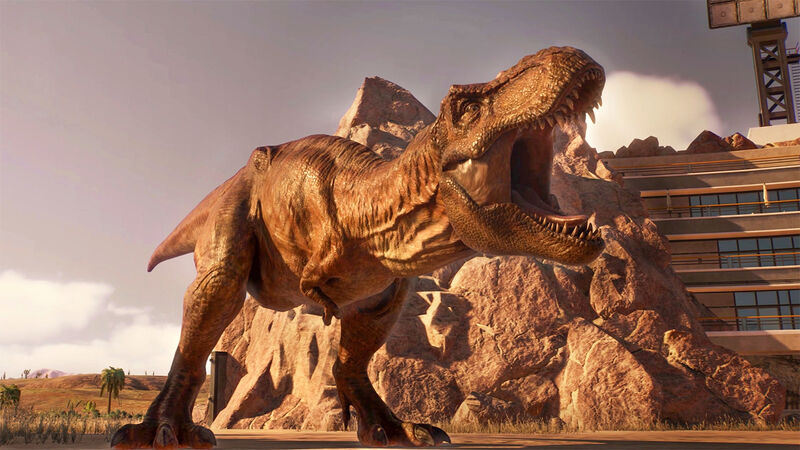 Are you ready to say, “Welcome… to Jurassic Park”? Well, now’s your chance! Frontier Development’s sequel to 2018’s breakout hit Jurassic World Evolution will be roaring onto consoles and PC next month. We had a chance to preview the new game, uncovering all the scaliest details to get you ready to run your very own dinosaur zoo. Hold onto your butts; here’s everything you need to know before “life finds a way” into your home:

If you’re a fan of the Jurassic Park series—and, of course, its relatively recent sequels, Jurassic World and Jurassic World: Fallen Kingdom—Jurassic World Evolution 2 will have you squawking in delight (or whatever sound it is that dinosaurs make when they’re excited). Lovable-rapscallion-turned-lovable-dinosaur-tamer Owen Grady is on hand to show you the ropes while you build your park, joined by Claire Dearing (voiced by Bryce Dallas Howard) and Dr. Ian Malcolm (voiced by Jeff Goldblum, who is being his absolute Goldblumiest here).

Granted, this trio may have a bad track record when it comes to running their own dinosaur zoo, but surely they’ll be chock-full of good advice when it comes to running yours. Listen up, and you can expect a healthy combo of helpful hints and exasperation over the fact that you’re building yet another dino park (depending on whether or not Malcolm is talking). Seriously, haven’t we learned our lesson at this point? Apparently not.

The tutorial is essential

Speaking of building a dino park, paying attention to the tutorial is key if you want to avoid, hypothetically, letting your triceratops die after (hypothetically) putting her in an enclosure with a carnivore because you’re not a dinosaur expert, you write about video games for a living. Hypothetically.

The tutorial will show you the ropes of the more fiddly gameplay elements, like helicopter piloting, capturing escaped dinos, and researching new foods and environmental stimuli. Also, and I can’t stress this enough—do not forget to refuel your generators. Oh, man. Turns out the only difference between an electric fence and a non-electric fence is that a T. rex can bust out of the second one and eat your employees.

If you were a fan of the first Jurassic World Evolution, the thoughtful updates in its sequel are going to blow you away. The game is visually stunning, in both the sweepingly dramatic landscape and in the scaly boys themselves. Over 75(!) species have been added to the game, and they’ve been buffed with enhanced behaviors, allowing them to act even more like their real-life counterparts, and delighting the paleontologists in all of us.

Whether they’re hunting as a pack or just preening on their lonesome, you can be sure that these dinos will be as scientifically accurate as possible. Herbivores will love the enhanced paleobotany element in the game, which has players planting environmentally-appropriate trees and shrubbery to feed their hungry, gentle giants, replacing the generic “herbivore feeders” of the first game. Oh, and you can unlock different colors and markings for your dinos! You probably can’t do that with real dinosaurs, but also, you can’t do anything with real dinosaurs because they’re extinct, so you might as well give those big lizard-birds the makeover they deserve.

This isn’t your average
zoo simulator

Okay, sure. This one may seem obvious. (Because of—you know—the dinosaurs.) However, there are a lot of gameplay elements in Jurassic World Evolution 2 that set it apart from other comparable zoo sims. You’ll be able to get in on the action when capturing dinosaurs, piloting a helicopter to find them and tranquilizing them for easier recovery. The park buildings also feature some serious customization options, with different add-ons (like photo ops, aquariums, and ice cream machines) attracting different kinds of guests.

A more dino-specific feature is the Hammond Creation Lab, first introduced in the original Evolution, which now allows you to incubate and hatch dinosaurs in batches. Once you release them into their enclosures, they will interact with their environment—locating food, water, and other necessities. Once they’ve settled in, they’ll make the area their own, changing the space over time to suit their needs, which, frankly, is super rad.

Prepare to get a little… chaotic

The crown jewel of Jurassic World Evolution 2 has got to be Chaos Theory Mode. If you thought that asking “what if?” was just for superheroes—well, think again. Per the game’s official website:

“Chaos Theory mode lets you play through key moments of your favorite films—with a twist. Experience ‘what-if’ scenarios from iconic Jurassic World and Jurassic Park films, with each level set across eras and locations from all five movies.  Immerse yourself in the Jurassic World franchise and see how things turn out when you are put at the helm of managing new challenges with unpredictable outcomes.”

Basically, if you watched the Jurassic films and thought to yourself, “I would be much better at taking care of these dinosaurs than Chris Pratt,” now’s your chance to put your hubris to the test. Will you change the fate of these perennially doomed parks? Or will your confidence (and also maybe a dinosaur) come back to bite you?