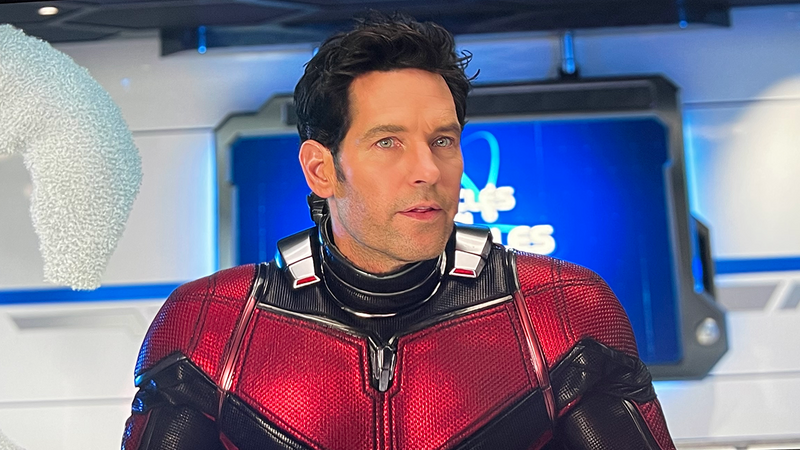 I’ve just returned from the Christening Cruise for the new Disney Wish cruise ship and while there will be more info/thoughts I’ll have soon about the ship and all there is to do on it, there was one thing I clearly needed to write about first: Paul Rudd as Ant-Man officially bringing up that whole “Ant-Man should go up Thanos’ butt to defeat him” meme from a couple of years back.

It’s one thing to have a show like The Boys to do their own recent ultra graphic and darkly comic take on that meme – that’s The Boys, after all – but it’s another to see Rudd as Ant-Man, in costume, actually bring it up. Yet that’s what happens on the Disney Wish when you have dinner at the Worlds of Marvel restaurant and experience the Avengers: Quantum Encounter show, an entertaining mini-film that involves several familiar faces from the MCU teaming up.

As the show begins, and Ant-Man / Scott Lang (Rudd) and the Wasp / Hope Van Dyne (Evangeline Lilly) introduce themselves to those in the restaurant, Scott says the following, before getting cut off by Hope:

“Look, before we start, let me address the elephant in the room. There’s a lot of chatter out there asking why I didn’t shrink down, go in and uh… kill Thanos in a really creative way. First of all, gross. Secondly, it’s much more complicated than that. Allow me to explain…”

So how did this unexpected joke come about? When I spoke to Danny Handke (Senior Creative Director, Walt Disney Imagineering), he revealed that it was all thanks to someone with plenty of recent experience telling stories in the MCU, Michael Waldron, the Head Writer for Loki and screenwriter for Doctor Strange in the Multiverse of Madness.

Said Handke, “At Imagineering, we write the scripts for our show and then Marvel brings in a writer to help us kind of punch it up and polish the dialogue. And so that was Michael Waldron. Kevin [Feige] brought in Michael to help us punch up our script and he added that joke.”

Handke said that Waldron felt Scott bringing this up made (highly amusing) sense, “Because this is one of Scott Lang’s first speaking engagements, so he’s kind of super awkward at the beginning of the show. He’s never spoken as an Avenger to a live audience before. And so he snuck that joke in there because that nervousness kind of comes out as he’s trying to explain, ‘Okay, alright, let’s get to this. Let’s clear this up. Yeah, everyone thinks about this. It’s not true.’”

When they saw it in the script, Walt Disney Imagineering were onboard with the joke, but then they needed to run it by Rudd, who it turned out was very game as well. As Handke recalled. “Paul goes, ‘Oh yeah, I know about the meme.'” The final version features some tweaks from Rudd, with Handke explaining, “He did it in his own way, because he’s an improv mastermind. His delivery’s spot on.” Handke added with a laugh, “I’m so happy that that’s become the thing everyone’s talking about. I didn’t expect that!”

The storyline of Avengers: Quantum Encounter has Ant-Man and Wasp, with some help from F.R.I.D.A.Y. (voiced, as she is in the films, by Kerry Condon), speaking to you live about Quantum science and newly developed Quantum Cores – which you have examples of in front of you at your dinner table and are asked to push to activate at several times during the show – only for Ultron to attack, seeking the technology for himself. This leads to a battle on the deck of the Wish itself against Ultron’s sentries, with Ant-Man and the Wasp receiving assistance from Captain America / Sam Wilson (Anthony Mackie), Captain Marvel / Carol Danvers (Brie Larson), and Ms. Marvel / Kamala Khan (Iman Vellani).

Regarding which characters made it into the show, Handke said Ant-Man and the Wasp came first, with the duo functioning as the leads, with the largest roles – and, ultimately, making an in person appearance inside the restaurant before your dinner is over, with Rudd and Lilly providing additional dialogue for the masked characters. Handke said the creative team asked themselves, “’What are not only great characters but talent that would bring in the audience using humor and fun and make it a little more accessible in that way?’ Landing on Ant-Man and Wasp, and Paul and Evangeline, was such an easy way in.”

As for the other heroes taking part in the finale, Captain Marvel was also in from early on, when they began developing the show in 2018 before her movie opened, with Handke saying they felt, “That’s a cool character and just that visual representation on the top deck [of the Disney Wish] would be really awesome, with her flying around.”

When it came to getting the more recent Sam Wilson in his Captain America identity and costume, plus the very current / brand new Ms. Marvel in the show, Handke explained, “When I found out that Sam Wilson was going to become Captain America, I’m like ‘That’s so cool.’ Him and Ant-Man have a relationship. ‘Tic Tac!’ Having him come in and he’s Cap, he’s the leader now, that’s such a cool way [to do it]. And then Ms Marvel was a very late add. We saw, internally, a rollout of that series, and we’re like, “Oh my gosh, Iman [Vellani] is so much fun. And with her connections to Captain Marvel and everything else going on, she’d be so much fun and let’s pair her up with Sam Wilson and see how they act together.’ She’s tagging along and she’s fangirling and he’s like, ‘I’ve got something to solve and stay out of my way, kid.’ So it just kind of naturally came together, that cast of characters.”

Vellani’s Ms. Marvel and Larson’s Captain Marvel will be having their big onscreen team-up in next year’s Marvel Studios movie, The Marvels, alongside Monica Rambeau (Teyonah Parris), so it is especially notable to first see them take part in the same adventure on the Disney Wish… except at the same time, the two, thanks to the specifics of the story, don’t actually meet.

Technically, the Marvel elements introduced in Disney Parks – including the Avengers Campus land – take place in their own reality, not the one seen in the films, to account for differences like Steve Rogers and Natasha Romanoff still appearing in costume, among other examples. Remarked Handke, “The multiverse helps us out a lot and explains what the theme park universe is. We do connect to the MCU, of course, not only the talent but some of our storytelling, but we also connect to what’s happening in Anaheim’s Avengers Campus and Paris’ Avengers Campus.”

With all that in mind, they knew it would feel odd to actually have Ms. Marvel and Captain Marvel meet in the Quantum Encounter show before The Marvels, with Handke describing the situation as, “She and Captain Marvel are just ships in the night.”

Still, while they don’t meet in Quantum Encounter, the scenes Vellani and Larson shot for the Disney Wish show were notable as it was some of the first footage both actresses made with The Marvels director Nia DaCosta. Said Handke, “We shot that in London very early in production for The Marvels and Nia was our sequence director for Iman and Brie. So it was the three of them kind of coming together for the first time on our set, which was amazing to see in person – Iman flying in that day and being there with Brie and Nia and they’re shooting our show and then going on to shooting their awesome movie.”

And while she may not get to meet Carol Danvers just yet, Handle noted, “Obviously Ms. Marvel is still a huge Captain Marvel fan. You get the idea.”

Worlds of Marvel is not the only Marvel experience on the Disney Wish. There is also the kids space known as Marvel Super Hero Academy, versions of which have been included on other Disney Cruise Line ships. The Wish incarnation of Super Hero Academy includes Black Widow / Natasha Romanoff and Captain America / Steve Rogers’ costumes on display and tech from Wakanda designed by Shuri alongside more examples of Pym Tech, plus appearances and photo ops with Spider-Man and Black Panther. There are also lockers belonging to Pepper Potts, Scott Lang, Hope Van Dyne, Peter Parker, and Shuri.

There’s also a game that can be played in Marvel Super Hero Academy that was unfortunately not available to try during the Christening Cruise, called Avengers: Mission Training, and Handke explained, “It has a storyline with the Quantum Cores. And it has Kerry Condon playing F.R.I.D.A.Y. as the voiceover, as the narrator, and Ultron’s in it as well. So they can play the game and see those little notes and things and then come to dinner and kind of have an idea, like a prelude, to what the dinner show would be.”

In addition, the ship will have an interactive experience called Disney Uncharted Adventure, which includes augmented reality and physical effects, and Handke noted Marvel will be a part of that, saying, “Uncharted Adventure will have connection points [to Avengers: Quantum Encounter and Marvel Super Hero Academy] as well. We’re just making sure everything Marvel on the ship kind of all comes together.”