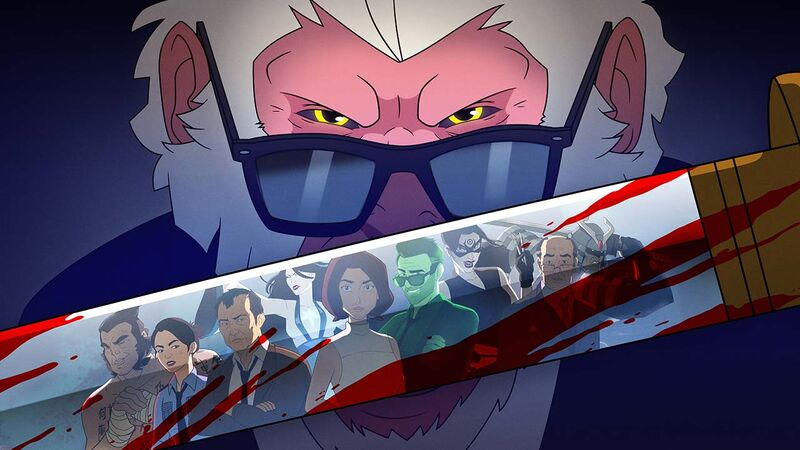 Sure, the Guardians of the Galaxy are pretty outwardly strange, what with the talking racoon and walking tree, and Howard the Duck is certainly an odd, well, duck. But those Marvel characters are still, ultimately, aliens. They have a built in, otherworldly explanation for what makes them so different to us. But Hit-Monkey? That dude’s just a seemingly normal monkey who happens to have learned how to be a deadly assassin! And now he’s coming to TV.

Marvel’s Hit-Monkey is a new animated series debuting this week on Hulu in the US, and suffice to say, it’s made for an adult audience. Filled with plenty of bloody, stylized violence and dark comedy, this adaptation of the Marvel Comics character — created in 2010 by Daniel Way and Dalibor Talajić — centers on a creature who is just an average Japanese snow monkey, until his tribe is slaughtered by human criminals hunting down Bryce (voiced by Jason Sudeikis), a hitman who crossed them. Now, “Hit-Monkey” (whose distinct grunts are provided by Fred Tatasciore) is out for vengeance. Accompanied by Bryce’s ghost as his guide, and sporting a suit and sunglasses, he’s about to show just how formidable and deadly a monkey can be.

Hit-Monkey’s Executive Producers, Will Speck and Josh Gordon, spoke to Fandom about why they connected to this offbeat character, casting Jason Sudeikis, and using established Marvel villains like Silver Samurai and Lady Bullseye in the series.

Recalled Speck, of the genesis of the Hit-Monkey series, “We had read the graphic novel and we were such fans of it. It spoke to a lot that Josh and I built off of with the core relationship with these two characters, but also the hard violence mixed with the opportunity for heart and comedy. Daniel and Dalibor did such a nice job with the 2010 comic that it really left a great impression on us and a path forward to do something really special. We talked to anyone who would listen about wanting to make this and we really found a champion in [Executive Producer] Jeph Loeb early on saying, ‘We’d love to make this as a pilot and put this together.’”

Hit-Monkey has made occasional appearances in the decade since he was introduced, but overall has not been a major ongoing presence in the comics, something Gordon and Speck said was only a benefit when it came to an adaptation. Explained Gordon, “It was kind of the perfect comic, because it has literally a perfect origin story, and a really tight first couple of issues, and then not a huge amount afterwards. It was cool enough to find its fanbase and find its home close to Deadpool and Spider-Man [for guest appearances] and some other issues that he has appeared in, but it wasn’t like we were attacking something with a huge history or a huge lore, which we really loved because it allowed us to interpret what we had loved, but build off of off of it.”

However, Speck noted, “We wanted it to be really respectful of the original voice of the character and also the original conceit that they did so brilliantly in the 2010 series. It was an exciting place to bounce off from. Sometimes, these sideline characters, there’s such a richness to the possibility of story, that it’s fun to come in and sort of finish what was started.”

One big example of building upon the comics is the depiction of Bryce, who is based off of a comic book character – a human assassin who serves the same basic role in the story, including appearing to Hit-Monkey as a spirit after he is killed by the same criminals who massacre Hit-Monkey’s tribe. But in the comics, he is a much less specific character, lacking even a name, and certainly not anywhere near as funny as you might expect someone voiced by Jason Sudeikis to be.

Gordon and Speck always saw Bryce as a perfect element to expand upon and Gordon noted, “When we wrote the original script, Jason was our first choice. We wanted to work with Jason on several projects in the past and he just really sparked to the material and sparked to the script and was pretty quickly like, ‘Yeah, I’m all in.’ It was a great win for us because he’s so perfect at balancing that sarcastic wit that Bryce has but he also has this tremendous undercurrent of heart. And I think that makes him a character you can root for, and a character that you fall in love with, even while he’s clearly not the best human being on the planet.”

Not shockingly, Sudeikis did some improv while recording his lines, with Speck explaining, “He definitely colors in between the lines. He is a great writer and a great storyteller, and as Josh said, he leads with heart. So if there were times where we all looked at a line or a moment and felt like, ‘You know what, this feels like it’s a little darker,’ Jason definitely came in alongside us and collaborated and tried to find that perfect tone for Bryce. He’s such a blast to have in the booth with us because he’s so additive and so invested.”

LUCK BE A LADY BULLSEYE TONIGHT

Hit-Monkey’s season-long arc keeps its title character in Japan and battling the Yakuza, but that doesn’t mean other established parts of the Marvel Universe don’t begin to bleed in as well. Besides a couple of mentions of some names of note, there are multiple established comic book characters who have a role in the series, with the caveat that they are, for the most part, already established as coming from Japan in the source material.

Said Gordon, “It was such a cool opportunity to explore some of these characters that don’t always get shown, like Yuki or Fat Cobra. Obviously, Silver Samurai has been shown a lot more, but it was fun to be able to explore them all in a slightly more comedic realm, while still honoring what makes them cool and badass and amazing [characters].”

Speck explained that, should Hit-Monkey return for more seasons, they would want to bring him to different locations, which would open the door for more. “Because we were set in Japan, we just wanted to look at those characters and be specific to location, but what’s great is the potential if we are allowed to continue forward to having him in all different parts of the world, and how that can translate to bringing characters forward, like Hit-Monkey, that have great possibility but maybe always didn’t have their chance in the spotlight.”

One very prominent villain in the series is Lady Bullseye, who essentially takes over a role held by the original Bullseye in the Hit-Monkey comics. Gordon revealed the plan initially was to use Bullseye on the show, only to be told that wouldn’t be possible. Said Gordon, “Suddenly, Marvel said, ‘Well, what about Lady Bullseye?’ And immediately we were like, ‘God, yeah, it’s so much better! Why didn’t we think about that in the first place?’ She turned out to be such an interesting character. She doesn’t have all of the baggage that comes with Bullseye, but she’s just as terrifying and just as psychotic and just as incredible. And in a lot of ways, because she hasn’t been explored that much, we were able to work on parts of her personality that have not fully been explored.”

He teased, “We actually have a pretty amazing end of season reveal, which Marvel was happy to embrace and we’re really lucky to be able to use, because it’s such a huge thing in the show.”

Speck and Gordon have plenty of ideas for a Season 2, should they get the green light for it – and yes, they’d love to have this animated version of Hit-Monkey meet Deadpool, if it becomes possible, given the comic book encounters those two have had.

Said Gordon, “We’ve always loved that one of the only characters that Deadpool is actually terrified of is Hit-Monkey. That’s kind of amazing.”