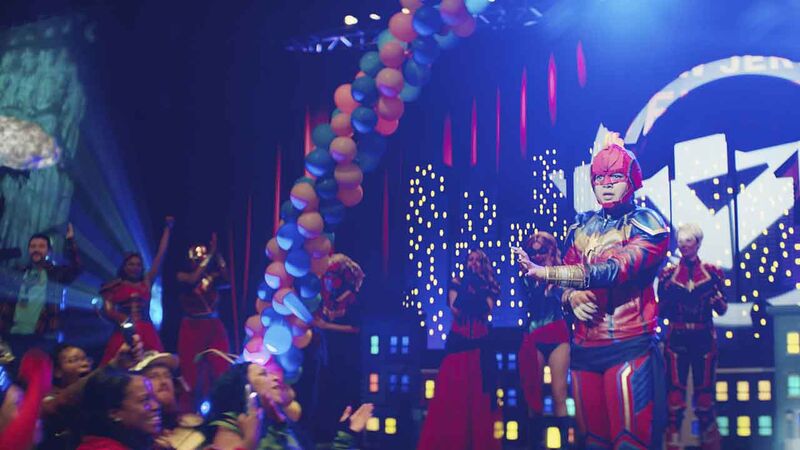 ‘Ms. Marvel’ Spotlights What Superhero Fandom is Like Within the MCU

When the MCU began with Iron Man in 2008, it was meant to feel much like our world. As time went on, we’d learn there was already a pretty notable bigger than life history there as well, whether it be with characters publicly known like Captain America or more unknown like the Eternals, but still, Tony Stark’s reality initially felt fairly similar to ours, awesome armored suits aside. Now though, after 14 years, we’ve seen so much happen in the MCU, with a ton of other superheroes and supervillains arriving, not to mention the monumental battles that have taken place around the Earth – and that’s not even factoring in how Thanos’ snap (and then, the blip) would change everything and make life feel quite different from what we know. But still, one thing would be true for both the MCU and our universe at this point: A bunch of superheroes are really popular.

Debuting this week on Disney+, the new six-episode series Ms. Marvel feels like the first MCU project to truly put the spotlight on what it would be like to be an superhero fan for those living inside the MCU itself, where superheroes are a reality. That door cracked open with Hawkeye, in which Kate Bishop had an intense hero worship of Clint Barton, but even there, Kate had personal and specific reasons involving the Battle of New York that explained why she focused on Clint. Not so with Ms. Marvel’s main character, Kamala Khan, who is simply a 16 year old girl living in a world where superheroes have been real as long as she can remember and who is obsessed with those superheroes, Captain Marvel most of all. Of course, Kamala doesn’t know it, but she’s destined to become a superhero herself.

I spoke to several members of the Ms. Marvel creative team about this aspect of the show – and the meta component to it – including Head Writer and Executive Producer Bisha K. Ali (Sex Education, Loki), episode 1 and 6 directors/Executive Producers Adil El Arbi & Bilall Fallah (Bad Boys For Life, Batgirl), and episode 2 and 3 director Meera Menon (The Punisher, For All Mankind). We also discussed the show’s trip to AvengerCon, the impact of the representation Ms. Marvel provides, and the huge find that is Ms. Marvel‘s star, Iman Vellani.

When it came to depicting Kamala as a superhero superfan,  Bisha K. Ali remarked, “That was kind of my greatest joy in this process. I’ve been on Loki. I’ve been on a giant world building [series] where we’re already inside this world that exists, which was incredible, and I loved it. But the joy of this one is that I myself am a fan. I know what fandom is and nerdam is because I have been one my whole life. And so the meta of that is so joyful, that I get to tell the story of what would happen to a fan if they were called up and brought into a whole new life that they could only have dreamed about. I really love that that’s what we’re doing. We’ve got this whole generation of viewers who have grown up on the MCU and the’re fans. And so for them to finally have a character who feels exactly the way they do… The fans are so creative, so passionate, so talented in everything that they make, and everything about fandom just involves so much art and so much heart. The fact that we can portray that in this character and her kind of be their everyman into the story, it’s such a joy.”

Meera Menon said she felt the fan aspect of Ms. Marvel was, “A reflection of the time we’re in. The MCU having had the enormous cultural impact it’s had for over a decade at this point has created the kind of fandom that I think a show like this can now reflect. A show like this can hold a mirror up to the impact that the MCU has had. The kind of meta nature, the self-reflexive nature of the show is not lost on me. And it was an incredible thing to see a kid like Iman — or a young woman, I should say — step into a role like this, because she is that fan. She is that fan that the MCU has created again and again, over the course of over a decade at this point. So it was very cool to just be playing in the layered sandbox that the MCU has created by doing what it’s done and now entering this character into what it’s done.”

Adil El Arbi said he felt that by starting with Kamala as someone idolizing superheroes, “It actually started like a very grounded story of a teenager that is Pakistani Muslim, having those teenage issues, searching for herself, searching for our own identity inside that larger MCU life. All of a sudden she has powers and she’s searching for is she [now] part of that superhero world that she was looking up to now and never thought that one day she would be part of that? So I think that contrast between the very realistic, grounded, charming aspect of that girl in her world and the larger superhero MCU world, that is what makes the show so appealing.”

The first episode of Ms. Marvel takes Kamala and her best friend Bruno (Matt Lintz) to AvengerCon, which we learn is the first-ever convention held within the MCU to celebrate these superheroes. Of course, in our world, there are a ton of big conventions where you might find Marvel heroes celebrated, including with the kind of cosplay Kamala herself participates in (dressed as her beloved Captain Marvel, of course).

Ali laughed about the early ideas, recalling, “The bananas pitches that were coming in from all the writers, including myself, of the kinds of displays that could be there… In the pilot, you get the tempered down version of the bonkers things that we had in mind in the writers room. That’s [Co-Executive Producer] Sana Amanat’s very smart influence, like ‘Maybe walk back that they can literally freeze themselves [at AvengerCon] or they can literally get themselves radiated’ and stuff like that. I’m like, ‘Yeah, sure, fine, I’ll wind that back!’ But there was just so much joy in coming up with all of that because we are fans, and this is a show for fans.”

El Arbi described getting to portray AvengerCon in the show as, “An homage to the fandom. Fandom is your name and Fandom makes the MCU great, makes the movies and the TV shows and the heroes just memorable. And I hope that the fandom will see that and see that it’s an homage and a love letter to them, the same way that Kamala Khan is a fan and is one of them and shows that everybody can be a superhero.”

Bilall Fallah and El Arbi both chuckled over how distracting it was to film on the AvengerCon set, which was filled with various Avengers-inspired booths and displays, with Fallah explaining, “We were like kids on the set” and El Arbi recalling, “The producers had to grab us and say ‘Focus on the directing!’”

Added Fallah, “It was really difficult to direct because it was so much fun! And also, I think in every shot, you will see Easter eggs. It’s filled with them. The whole team, we brainstormed and we had all these ideas. It was super cool to do that.”

I spoke to the Ms. Marvel team the day after attending a screening of the first two episodes at a screening at the El Capitan theater in Hollywood, where it was impossible to miss the overt joy experienced by the audience. As we exited the theater afterwards, I directly overheard many saying they couldn’t believe the representation the show provided in a way few other mainstream series of this scale have.

Said Menon, “Yeah, the vibe at the premiere was really incredible because of that, I think because a lot of people were seeing themselves on screen for the first time, and on a big screen for the first time – especially being able to see it in a movie theater was particularly special. That component of the show is certainly why I wanted to be a part of it in any way I could. Just this idea that knowing that so many young brown kids, young Muslim kids, young South Asian kids, would see themselves in Kamala’s story, see their families in Kamala’s family, and feel a little less alone. I think that the power of this kind of representation can’t be overstated.”

“It’s very special,” said Fallah. “We never saw that representation and having that Muslim girl that reminds me of my sister, of my nieces, Adil’s wife, our mothers, all these Muslim women that meant so much to us. It’s our homage to them and they have this representation and I hope it will inspire a lot. So yeah, for us, that’s a milestone.”

El Arbi said he felt another notable thing about Kamala’s story is how easy it is for anyone to connect to, remarking, “It’s great to just also be able to tell a universal story where even if you’re not a Muslim girl from Jersey, you can relate to her and feel empathy for her and want to follow her adventures. That is just the true power of entertainment, of cinema and TV.”

One thing that is very obvious watching Ms. Marvel is that newcomer Iman Vellani has the proverbial “It” factor, instantly proving why the 19 year old Canadian was cast, thanks to her incredibly likable, engaging performance.

Asked if Vellani’s untapped starpower was obvious from the start, Menon replied, “Yeah, it was almost immediate. It was one of those things that was kind of stunning to behold. Of course, anyone that makes it to this level is talented and has that energy and has that charisma on screen and so you take it for granted when you work with actors in this capacity and at this level that they’re good. But the thing about Iman is that we knew that she had never done this before. She had just graduated from high school a few months earlier. She had responded to an open casting call and just kind of threw her hat in and didn’t necessarily make anything of it.”

As much as they saw her talent, Menon admitted there was some trepidation about how green she was. “There was a little bit of a question when we started filming of, say, would she understand continuity? Would she be able to hit her marks? Would she be able to do even just the technical things that are required? It’s like being athletic, what an actor is required to do in order to be able to be a part of this mechanism of filmmaking. She got it almost right away like she was born to do it. It was so intuitive to her. And then beyond that, just the charisma that exuded through the screen… I’ve said this before but I believe there’s a Lucille Ball kind of energy to her where you just love her, you love her foibles, you love her flaws. And that’s so rare. There’s something really rare and special about her that was there immediately. And it was kind of astonishing.”