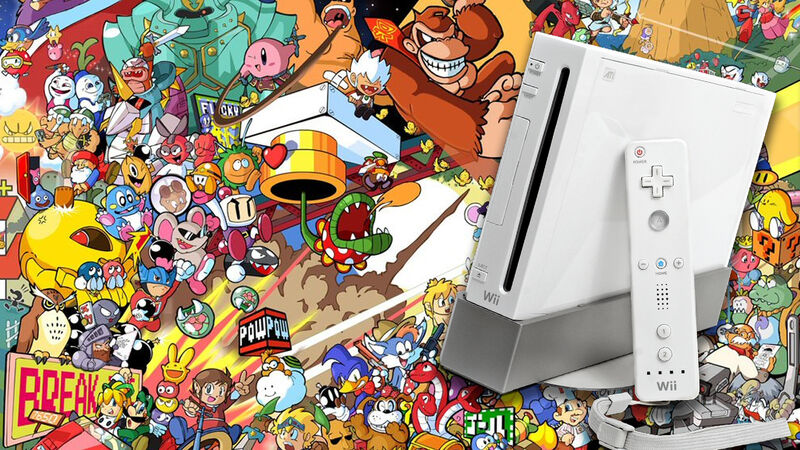 2021 marks the 15th anniversary of one of the most influential consoles of all time鈥攐ne that changed gaming for the better. The Nintendo Wii was released on November 19th, 2006, and it both became a household name overnight and saved Nintendo from permanently falling out of the video game competition. How did this little white box go on to become not only the best-selling home console of its generation, but also Nintendo鈥檚 guardian angel?聽 Let鈥檚 start at the beginning.

Why did Nintendo need saving?

With the current love for the Nintendo Switch (which has sold over 89 million units to date) it鈥檚 hard to imagine Nintendo as anything other than an iconic gaming giant. After Nintendo鈥檚 first console, the Nintendo Entertainment System聽(or NES), sold over 60 million consoles in 1983, Nintendo was seen as one of gaming’s biggest competitors for upcoming generations of gaming. However, the beloved company was to face years of declines in sales, putting them in huge jeopardy. Let鈥檚 skip ahead now to the era of the Nintendo Wii.

Unlike the powerhouse that was the NES, Nintendo’s later systems performed consistently poorly in the console wars. With their next console, the Nintendo 64, Nintendo could only sell 32.93 million consoles. This may sound like an impressive number, but that was only a third of how many units Sony鈥檚 PlayStation was able to sell. Sony had become king, putting the PlayStation on top. Nintendo tried to re-enter the race with the Nintendo GameCube in 2001, but the lovable purple box didn鈥檛 fare much better.

By this time, Microsoft was gaining traction in the gaming sphere, which didn鈥檛 help Nintendo鈥檚 struggle to move hardware. The GameCube was moving slowly, selling about one-third fewer consoles than the N64. Meanwhile, Microsoft鈥檚 first system, the Xbox, outsold the GameCube by almost 4 million units (at 24 million units sold). Sony blew both companies out of the water with over 150 million consoles sold of their Playstation 2. Sony was a supernova, and Microsoft a rising star! Nintendo, however, was fading into the background.

Sony and Microsoft were competing in a race that Nintendo was never going to be able to keep up with. By the time 2006 rolled around, Sony and Microsoft had moved onto their next generation systems. These tech goliaths had more resources than Nintendo did at the time and put those resources to work to create powerful pieces of gaming artillery. The Xbox 360 and Playstation 2 both had better processing powers, amazing graphics, and more intuitive built in memory, this meant that they could handle high definition, high quality games that had hours of gameplay and plot. These consoles were more expensive, but they had extra features that made up for the price. They could double as DVD players, had great game catalogs and new features that hadn鈥檛 been as fleshed out in gaming before. Microsoft began to really dominate the online gaming market after spending a billion dollars on Xbox Live, an online service for multiplayer gaming and digital content delivery. Little Nintendo couldn鈥檛 stand a chance.

Nintendo began working on the GameCube’s successor. They knew that they had to strike gold with this generation; otherwise, they鈥檇 lose all hope of staying in the gaming game. Since there was no way they could keep up with these bigger competitors, Nintendo decided that they didn鈥檛 want to keep fighting in the same war and completely changed the game. Instead of creating a more powerful, fast-moving console with high-resolution graphics, Nintendo created an innovative, low-cost console that was more accessible to a general audience and had new, cutting-edge motion controls. They named it the Nintendo Wii. The console had worse graphics and a slower processor than Sony and Microsoft, yet it destroyed their consoles in sales. The Wii drove Nintendo to new heights in the gaming landscape.

What made the Wii different?聽

Gaming has always been seen as a more niche hobby, and while it had grown to be more mainstream by 2006, there was still a lot keeping video games away from a wider audience.聽 Nintendo President Satoru Iwata decided that for this new generation, Nintendo should appeal to as many people as possible with more accessible titles. Iwata wanted to give casual gamers a cool new experience, and give those who haven鈥檛 gamed yet a reason to get into the gaming world, moving away from focusing on more hardcore gamers. Longtime Nintendo developers Shigeru Miyamoto and Genyo Takeda designed a console with a simplified interface to make navigation easier, focusing on motion detection in order to make the gaming experience more intuitive for anyone and everyone. Thus, the Wii was created! This simple box with new movement-based controls promised a completely immersive gaming experience where players would become one with the virtual world in front of them by literally jumping into it.

While the Xbox and the PlayStation were marketed toward more hardcore gamers, the Wii and its easy-to-learn controls appealed to a wider audience and broadened the entire video game market, tapping into buyers who had never had much of an interest in video games before. The Wii put an emphasis on multiplayer party games that truly encouraged families and friends to play together in the colorful wacky worlds of games like聽Mario Party聽and WarioWare鈥攁 stark contrast compared to Call of Duty LAN parties.

When I say the Wii brought in new generations of gamers, I鈥檓 not just talking about younger, new consumers. After the release of this new generation console, it became pretty common to see viral media posts about retirement homes bringing seniors new life with the purchase of a Wii. Evidence from research studies shows that Wii-based training is comparable to other exercise programs for improving balance in older adults. Wii-based exercises worked so well that even now, fifteen years later, some retirement homes still have working Wiis in them.

The Wii was also one of the most affordable consoles on the market during one of the worst financial recessions in recent years. In 2009, the housing market crashed and the video game industry numbers echoed that of the rest of the financial world. The Xbox 360 and PlayStation 3 would sometimes require expensive HDTVs to play their games, and those televisions were an indulgence many families couldn鈥檛 afford at the time. And, of course, in addition to the pricey tv, families also had to purchase the actual consoles! This is where the Wii would reign supreme.

Although some consumers felt the burn of the reduced graphical output of the Wii, that risk meant that the Wii could be sold at a fraction of the cost compared to PlayStation and Xbox. While the Xbox 360 cost $400 and the highly criticized PlayStation 3 was listed at up to $600, the Wii was listed at just $250鈥攁 comparatively much more affordable price point! In 2006, Nintendo was scraping the bottom of the Donkey Kong barrel, but, just two years later, they were leading the market with 691,000 Wii consoles sold compared to Xbox 360鈥檚 330,000 and PlayStation 3鈥檚 218,000. The Wii had brought Nintendo back to life. As of 2021, the console had sold over 101.64 million units. While it didn鈥檛 quite surpass the success of the original PlayStation or the PlayStation 2 (the best-selling gaming system of all time), the Wii is Nintendo鈥檚 most popular console ever created and will always be known as a console that ended up changing the video game landscape forever.

The Death of The Wii

All good things must come to an end, and, soon after 2008, that end came for the Wii. It became immediately that clear that even Nintendo themselves underestimated the popularity of their own console. When the Wii was first released, units were flying off the shelves. They were moving faster than blue shells in Mario Kart! Scalpers who got to consoles first tried selling them for double or triple the price (making it the same price as an Xbox or PS3). These production issues lasted for almost a year and a half after the console’s initial release.聽The Wii was a craze everyone wanted to get their hands on, but Nintendo鈥檚 production issues took a little too long to get right.

By the time these production issues were fixed, interest in the Wii began to fade. The novelty of new motion-controlled games wore off and, instead, consumers began to focus on the actual quality of these controls. Unfortunately, under close scrutiny, the Wii’s motion controls left a lot to be desired. Some games that relied too much on motion controls became hard to play through and even impossible to finish, no matter your skill level with gaming. If you couldn鈥檛 finish the games you had, finding new games to play was starting to become difficult as well. Since the Wii had to scale back on some high-end graphics compatibilities, many game developers pulled back on creating releases for the Nintendo Wii, as they were unable to bend their game designs to fit the Wii鈥檚 specifications. Influential third-party developers left the Wii out to dry and the remaining third-party titles that could put out games for the system rarely met gamers’ expectations. During the entirety of the Wii鈥檚 lifetime, not a single third-party title was able to burst through the top five best-selling Wii games;聽Just Dance 3 is the only one to even make the top ten.

Nintendo attempted to give the Wii a second life by launching its first high-definition console, the Wii U, in 2012. Consumers were confused by the naming, thinking that the Wii U was an accessory for the existing Wii (much like the Xbox 360 Kinect). However, the purpose of the Wii U was to become a competitor to more powerful consoles like the PlayStation 3. While the Wii U had better graphics capabilities than its predecessor, it still came up short compared to the competition. The rest of its processing power was barely on par with the Xbox 360 and PS3, and certainly no match for the next-generation consoles from both Microsoft and Sony. The Wii U had extremely limited third-party game support and its launch title, New Super Mario Bros. U, didn鈥檛 give gamers much to be motivated by. With a lackluster catalog of games and poor marketing tactics, the Wii U was considered a catastrophic failure. Within a year of release, Nintendo鈥檚 most recent console, the Nintendo Switch, has surpassed the Wii U鈥檚 total sales ever. While the Switch has not yet surpassed the incredible success of the Wii, its release was a sign that Nintendo was journeying into exciting new waters.

Get Your Own Wii!

It may sound “Wii-diculous,” but one of the best ways you could celebrate the 15th anniversary of one of gaming’s most interesting consoles is by getting one yourself. Whether you had one as a kid, or never got the chance to pick one up before, the Nintendo Wii still holds a lot of value as one of the best consoles in video game history.

In 2021, you can find a console for anywhere from $40-$100 and most Wii games can be found as cheap as $10. While the latest generation of Nintendo consoles, The Switch, has a few Wii remakes on switch, the actual list of Wii remasters and ports is relatively small. While the Wii does have issues with storage and the motion controls aren鈥檛 exactly perfect, the library is impressive and if you still haven鈥檛 gotten out of your pandemic rut, getting a motion controlled console will get you up and out of your slump and back into exercising! The bottom line is the console is packed with incredible games, many of which you can only experience on Wii.

You may have to get some sort of dongle to connect your Wii to an HDMI TV and as we鈥檝e mentioned, the Wii wasn鈥檛 known for its graphical quality even when it was released so don鈥檛 have too high of expectations there. 15 years is a big milestone for a huge console. Why not celebrate by getting your hands on your own?