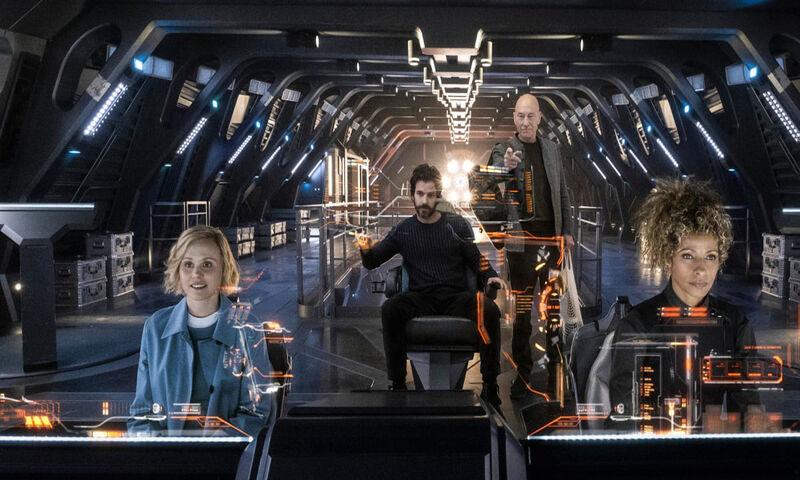 ‘Star Trek: Picard’ Recap and Reaction: ‘The End is The Beginning’

The third episode of Star Trek: Picard is perhaps the most aptly named one yet. “The End is the Beginning” gives us the first taste of what this series will be. We finally see the inside of a ship outside of Picard’s brain and this setting, to his own admission, suits Picard far better than the vineyards. This episode lays the groundwork for the adventure to come and gives us plenty to look forward to out in the stars.

We get more on Raffi, the isolated woman Picard sought out. We find out she lost her job at Starfleet likely due to her closeness with “J.L” (I can’t wait until someone like Riker or Troy hear her call Jean Luc that) and then never heard from him again. Instead she’s lived a life of isolation and substance abuse for which she blames Picard. There’s a great deal of tension and mistrust but she still introduces him to the next new member of the crew.

Chris Rios is a freelancing ship captain who doesn’t seem to care too much what job he takes. Picard has to steel himself from sitting in the captain’s chair once invited aboard, and instantly picks Rios as ex-Starfleet. Rios won’t talk about himself, but what we do know is his last ‘good man’ superior came to a gruesome end, he owns a really nice looking ship, and he’s potentially a bit of a narcissist. His ship is crewed by various emergency holograms much like the famous Doctor from Voyager. The holograms share Rios’ likeness with different accents, which is an interesting choice by the captain to say the least.

Picard heads back to his estate for a deep conversation with his Romulan worker and friend Laris. Fans of TNG know Picard was never a man to be happy unless he was in space. “I tried my best to belong to this place, but I don’t think I ever truly felt at home here.” he muses, to which she replies “I suppose you’ve always had one eye on the stars.”

The estate is attacked by the secret Romulan force, the Zhat Vash. Thankfully due to the surprising amount of weapons stashed around the house, Laris, Zhaban, and Picard defend themselves. Just when we think the action is over, one last attacker appears but is shot by an unknown source. It turns out to be Dr Agnus Jurati, the specialist in synthetics, who’s come to pledge herselt to Picard’s quest.

Raffi, who has a talent for seeing patterns in data, claims to have found Dr. Maddox on a place called Freecloud. This combined with the attack on his estate causes Picard and his makeshift crew to take to the stars. Once aboard Captain Rios’ ship we are treated to a classic Picard “Engage”. We also get a glimpse at the ship’s holographic controls and once again, I just need to say, this is a really nice looking starship.

Meanwhile, the Romulan Reclamation Site continues to generate mysteries. Soji meets with Hugh, a former Borg and another great throwback to TNG. Hugh was found injured as a member of the collective and nursed back to health by Dr Crusher on the Enterprise. Now he serves as executive director in the reclamation project and thanks to Soji’s compassion and Romulan knowledge, he allows her to meet with a woman called Ramdha.

Ramdah is a part of a group known as “The Disordered”. They’re Romulans who were assimilated by the Borg and have never recovered. Our first moments with them remind me of how the group of genetically engineered humans were presented in Deep Space 9. They’re all in a separate, sterile room, close ups shots are shown in disorientating angles while they play with puzzles or talk to themselves. Ramdah is using what looks like it could be Romulan tarot cards and as Soji, accessing knowledge she doesn’t know how she has, manages to get her to talk, Ramdah seems to realise what she is. Ramdah calls her “The Destroyer” as though part of a proficy, which could help to explain the Romulan hate and fear of synthetic beings.

These are the first steps out into the stars. Picard and his rag-tag crew are finally out in space, a prophecy has been revealed, and many questions remain to be answered. If the first two episodes were more of a prologue, this third one is the true beginning of our journey to unravel the mysteries of the synthetics and that all starts with finding Dr. Maddox on Freecloud.