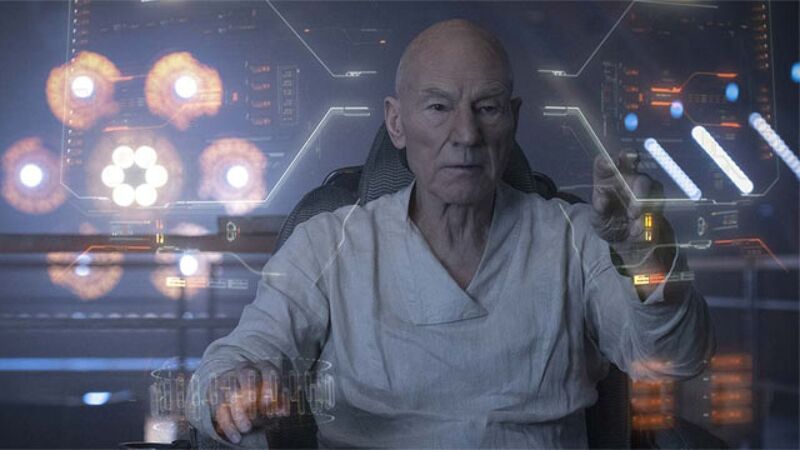 There was certainly a lot to wrap up in Picard’s final episode, with direct threats coming from every angle. On the planet, we saw Soji and the other synthetics desperately constructing a beacon to call their saviors. Meanwhile, the Romulan forces draw ever closer and Picard’s looming threat of his own body giving out. Everyone had skin in the game this episode and it showed with different twists and turns from almost all the major characters.

Synthetic technology does a bit of heavy lifting this episode but it’s not implausible. On the La Sirena, Rios and Raffi use the tool they were given previously to fix the ship with the power of thought. Feeling more akin to magic, it drives home just how far ahead the Synthetics are in terms of technological power. This probably helps them to accept Narek’s proposition to work together when he shows up throwing rocks at the ship.

Narek weaves the story of the destroyers. Elnor helps by forcing Narek to use terms like demons rather than synthetics to stay true to its original casting though it still rings true to their current situation. Narek explains he believes this is history and has happened before where life was wiped out the last time synthetics reached this level of evolution. The group agrees to work together and leave the ship to stop or at least stall the synthetics.

Perhaps the biggest twist was our ever deceitful Dr Agnust Jerati. For someone who appears to be the worst liar on the planet, it seems Jerati manages to turn her anxiety into earnestness when it comes to espionage. While she clearly wants the synthetics to survive, she’s no organic traitor and sets Picard free. They both head to the La Serena to confront the Romulans and show Soji and the others who they truly are.

There’s a beautiful bit of reasoning that Picard works his way through here. He reasons that this race, while technologically advanced, is still in its infancy. “They have life but no one is teaching them what it’s for. To be alive is a responsibility as well as right.” he says, but Jurati rightly points out there’s not much time to teach them this important lesson. Picard resolves to teach them by example before taking off to face a fleet of ships for beings that are trying to destroy him.

Once coming up to a fleet of over 200 Romulan ships, reality hits and they need a plan. Jurati suggests the Picard maneuver in which they make one ship look like more to buy time until the Federation hopefully arrives. She uses the synthetic imagination tool to realise this plan on a large scale but it only gets them a few extra seconds against the Romulan determination to destroy the synthetics.

Thankfully, the Federation turn up in time with the not-so-retired Will Riker leading the charge. This show of friendship by the Federation combined with an excellent speech from Picard to Soji in which he urges her to “Show them how profoundly wrong they are about you,” convinces her to close the portal and stop the threat. The Federation then send the Romulans packing with a fun very Riker threat.

This doesn’t stop Picard’s imminent doom and as he succumbs to his disease we are treated to a beautiful scene between himself and Commander Data. We learn Data’s consciousness has survived and Picard is sort of in it for now. The two reconsile and Picard gets to hear something he’s needed for years from his old friend.

All that foreshadowing about how far ahead synthetics are and the story of Troi and Riker’s son’s death pays off as Picard awakes to a new body. He seems mildly saddened to learn it’s not got any super-powers or extension of life but after talking with Data has some fresh perspective. Data had asked him to turn off his consciousness, to allow him to experience the value of a life that ends if only for a moment. Picard sets to this task in an emotional scene and in a way is reminded of that value for himself.

The final scene shows the crew of the La Sirena with some new relationships forming and some slightly older ones appearing to hold. Picard looks around the ship and it feels like he’s realising for the first time all season that he truly has a crew. He gives the ever iconic order “Engage” and we’ll have to wait for next season to see where they boldly and kindly go next.