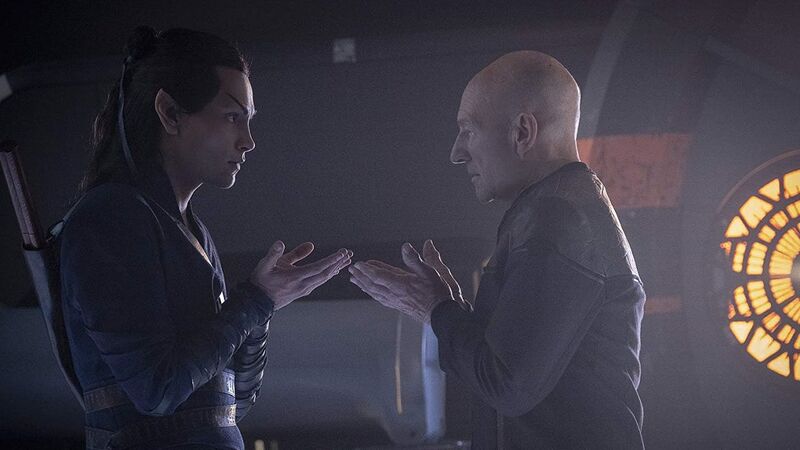 Fans of classic Star Trek and especially The Next Generation will feel more than at home during the fourth episode of Picard, titled “Absolute Candor”. Of anything we’ve seen so far, it feels the most like a traditional episode and even brings back one of our first familiar faces.

This episode focuses heavily on Picard and leaves Soji’s arch relatively untouched. She is still starting to come to terms with how she knows things, this label of Destroyer, and what it all could mean. She turns to Narek, the Romulan spy, and the two seem to be starting to have a genuine fondness for each other. He is still being pressured by his sister to get the job done faster but, where once it felt like he was using Soji, now it seems the tables could be starting to turn.

We see a flashback to another set of lives Picard has left in the dust. On the planet Vashti, Picard was championing Romulan refugee missions from the evacuation. There was a sect of warrior nuns among the Romulans called the Qowat Milat who were helping in the efforts and caring for Elnor, a young boy. It’s not common for Picard to enjoy the company of children, but he has a genuine rapport with the lad. This personal touch is why it’s even more heartbreaking for him when the rescue mission was cut off with the synthetic attack.

Picard seeks out the Qowat Milat as they are enemies of the Tal Shier, holding honesty and candor above all else. He remembers the peaceful and burgeoning refugee city but upon finding out about the new course, Raffi sets him straight explaining Vashti is now a place of great violence. Raffi understands Picard’s desire to go back but it seems to cut her even deeper given she felt abandoned by him just as these people were.

Making it past initial defenses, Picard beams down to the planet alone. This feels so much like old Star Trek because he just appears in town square on a tiny dusty set. It’s not the hopeful place from his memory but it feels like it could be straight out of countless Trek episodes. He visits the nun Zani who asks him to take the now grown Elnor, as he’s never had a true life though is fully trained. Picard both wanting to restore his connection with the boy, and almost salivating at having a skilled warrior at his side agrees.

It felt in some ways that Picard made sure to hold back on his plea, almost as though not to pressure Elnor, who’s heart he broke by never returning. When Elnor says no, Picard leaves but then decides to pick a fight with a group of Romulans by entering a pub where he’s clearly not welcome. It’s hard to say if this was Picard’s plan to get Elnor on board or if he was upset by the segregation but his life is quickly threatened.

Elnor returns to pledge himself to Picard’s quest in a bloody display, however, Picard regrets their deaths and his actions of the past. His heart was broken by his inability to save all the Romulan lives and the betrayal of Federation morals that all these people suffered for it and this decision clearly weighs heavily on him.

They are hastily beamed up to Rios’ ship where Picard firmly tells Elnor never to fight again without his permission. Elnor obliges, and when asked by the scientist and proven ray of sunshine awkward chatterbox Dr Agnus Jurati why he agreed to come along, Picard reveals that a Qalankhkai will only bind themself to a “lost cause”.

The ship is immediately attacked and we are introduced to yet another Rios EMH for weapons systems. The crew is saved by an unknown pilot who’s ship is about to be destroyed for its efforts. They beam her aboard at the last second and we get a glimpse at Voyager’s Seven of Nine who promptly passes out after quipping she’s owed a new ship. This cuts straight to the credits despite our pleas of “What? No! More!”

What felt like a little side adventure ended up giving us two new potential crew mates, one new and interesting from a background we’ve never seen and an old favourite uniquely positioned to deal with the potential Borg Cube encounter of the future.