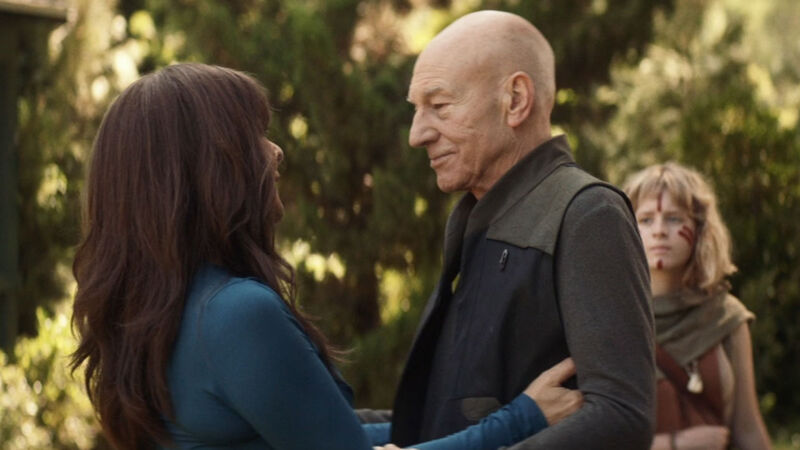 Fans of Star Trek: The Next Generation are treated to a smorgasbord of references in episode seven, titled “Nepenthe”. Picard is reunited with former shipmates, Troi and Riker and their new idyllic life in his mission to rescue Soji. Their own personal trials as parents, as well as Troy’s skills as a counselor, provide Picard with some much needed guidance in dealing with the newly awakened android who’s still very much coming to terms with her self discovery.

When we last saw Picard and Soji they were escaping from the Borg Cube via a transport device. Picard requested they go to Nepenthe. Upon finding Kestra, Riker and Troi’s daughter, we find out why. Not only is it a safe place full of warmth and old friendships but it’s also a place to feel grounded. They live a somewhat rustic life in a large wooden house (with some impressive defensive technologies), cooking their own food using hunted meats and vegetation grown from the soil which has regenerative properties. It’s the epitome of wholesome and also a drastic change from the harsh Borg cube from where they came.

Watching Picard reunite with his former Number One and ship counselor was just as warm. Long embraces befitting of their friendships are a staple for the episode and we’d be lying if we said this bit of fan-service didn’t warm our hearts. It’s also not just window dressing, it’s an attempt to show Soji that these people are caring and compassionate and they look out for each other. Unfortunately, as she reveals with a conversation with Troi, all of this only makes her trust them less after her experience with Narek.

Thankfully, Troi’s expertise allows her to take in this reveal for what it really is and she gives Picard a stern lecture. Troi was always a voice of reason on TNG because of her empathic abilities. While they don’t work on Soji, her training still allows her to see what Picard can’t. Soji has trouble trusting after Narek’s actions and that’s a lesson Picard needed.

We learn Will Riker and Deanna Troi had a brilliant son Thaddius who fell ill, causing them to move to this planet in the hopes of using the healing soil. Sadly, his disease was curable by the same technology that was forbidden once The Federation ruled against positronic technologies after the android attack on Mars. His loss is deeply felt by the family, and especially Kestra who still regularly uses languages he created when trying to feel connected to a home-world while living on star ships.

In this and other aspects of her forward nature, Kestra bonds with Soji. She’s not sensitive but she’s direct, earnest, and curious which puts Soji at ease more than others who may have ulterior motives. This brief meeting with this family, and especially Kestra feel like they will be instrumental in helping Soji find her own version of humanity in the future.

We also see the aftermath of their escape from the Borg cube where Narek’s sister is mercilessly murdering the ex Borg trying to find out where Picard and Soji went. Elnor, who stayed behind to help, doesn’t manage to save Hugh or the former Borg but stays alive just long enough to hide and call the Fenris Raiders for help.

Back on the ship they scramble to get away from the Romulan defenses, but are eventually just let go so Narek can follow them. Rios can’t seem to shake Narek despite his best attempts and while unknown to him, we learn that Agnus has ingested a tracking device. All her betrayals lay heavily on her causing Raffi to offer her escape, probably by way of drugs but Agnus chooses cake instead. In the end Agnus, wracked by guilt and perhaps fear, puts herself in a coma which also seems to disable the tracking device, allowing the team to meet up with Picard in orbit of Nepenthe.

Now with Soji’s home planet as the ultimate goal, this pits the crew directly against the Romulans who have a head start. However, with Dr Jurati’s possible change of heart maybe they’re actually safer than before. There’s also Elnor, who if he does manage to get the help he needs (maybe even from a repeat appearance of Seven of Nine) might have a Borg Cube to back them up. It feels like there’s a lot of action to come in the following episodes as we unravel Soji’s origins and maybe even restore her ability to trust.