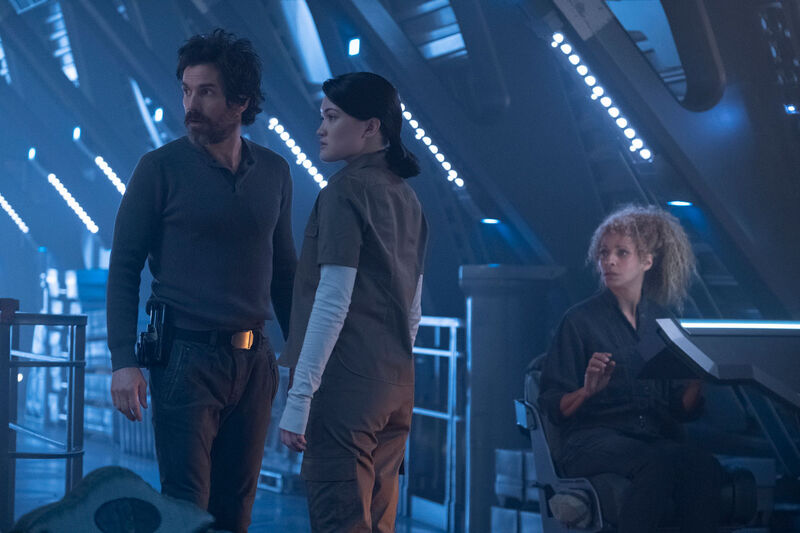 Episode 8 of Star Trek: Picard is aptly named as the “Broken Pieces” all start fitting together. We finally start to gain a greater understanding of the Romulan resistance towards synthetic life combined with intertwining pasts of the La Sirena crew all coming together to form a greater story.

In the opening, we finally see the Zhat Vash ritual that shows it’s members a horrible truth. Sometime in the past, hooded figures stand in a circle with a warning that they may not survive. This includes Rizzo and the Romulan ex Borg Ramdha who we learn is Rizzo’s aunt. Once the apocalyptic visions from thousands of years ago are over, all but Rizzo who has a newfound resolve and Ramdha who’s madness is already taking a hold of her take their lives.

In the current time, Rizzo is still wreaking havoc on the Romulan cube, but comes across many dead bodies of her men. She finds the calling card of the Fenris Rangers and immediately knows the former Borg Seven of Nine is back. Seven showed up just in time to save Elnor but, in their attempts to save themselves and any other lives upon the cube they can, she must make an impossible sacrifice. Despite her intense fear that she may lose control, Seven hooks herself back up to the Borg Cube to take control of this collective. Rizzo gives orders to eject thousands of the Borg into space as she does so and it’s clear she feels every loss. With the remaining collective Seven manages to take back the Cube, save Elnor, and even reclaims herself but the personal cost had to be astronomical.

The pieces are really falling into place on the La Sirena. Once Soji boarded the ship, Rios locks himself away at the sight of her and amongst everything going on this triggers Raffi’s incredible ability to see patterns. She collects all the hologram Rios’ together to unravel the puzzle of which they all hold small pieces. We learn that the system of eight suns the Romulans were drawing patterns of could not exist naturally and was built as a warning. Still not quite getting the full story she manages to get Rios to talk and we learn that his former captain killed himself after murdering two beings on first contact on Starfleet orders. One of them is identical to Soji, which leads them to the conclusion that they were synthetic lives. We also confirm that Romulans caused the synthetic attack on Mars, which must be the heaviest of weights from Raffi’s soldiers after losing her family on the theory.

Soji is also continuing to find her place. In a conversation with Picard she learns more about Data and asks Picard about their relationship. Soji asks if Picard believes Data loved him and Picard is hesitant, explaining Data’s emotional abilities weren’t that strong. In further conversation, Soji determines that Data did love Picard and in that discovery the old Admiral’s face, though shown only for a brief moment, is one full of pain and loss but also love of his own.

Dr. Jurati explains her own murderous actions to the crew after meeting Soji. Her heart is changed after seeing the girl as a work of art and life. She explains that Oh put a mind block on her so she couldn’t reveal her intentions and her visions of the apocalyptic past. They talk about an evolutionary level of synthetic life, which when reached something terrible happens. It almost sounds as though there’s some greater being in the universe keeping check to cleanse this when it goes too far but that’s yet to be fully revealed. All of these revolutions come together and allows Picard to contact Starfleet for help, which they seem to actually want to supply. They also spur Soji’s desire to see her home world and after some convincing the crew agrees. They set a course but once they arrive it’s clear only to the audience that they were followed by a Romulan ship.

Though we didn’t get to see Soji’s homeworld this time, the fear for the survival of her people is already very present. Seven’s potential promotion to queen of the Borg cube is also an interesting turn as that power will surely be an ally in the future but only if she can keep it from assimilating her soul. It’s clear the next episode will see a massive struggle between the Romulan fears and Picard’s compassion and it seems certain there’ll be some casualties in the fight.