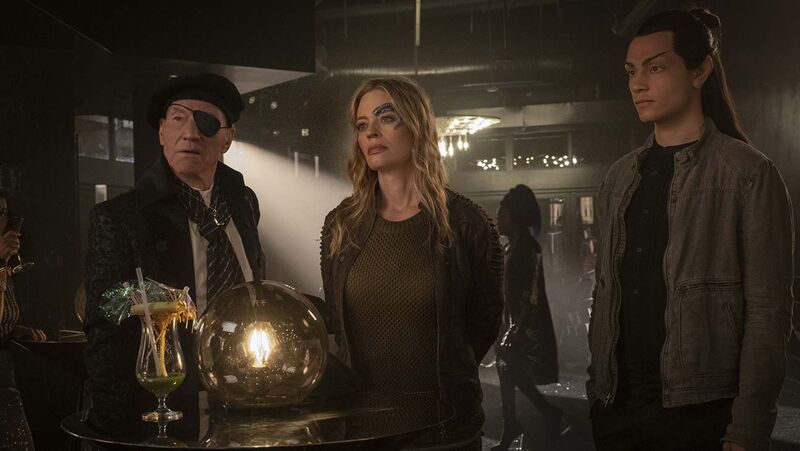 Like the previous episode, “Stardust City Rag” feels like familiar Star Trek with a bit of a new spin. The crew has to go undercover to get access to Maddox and there’s something heartwarming about seeing a space crew dressed up in ridiculous costumes. We also don’t see anything of Soji. This is all about Picard, his crew, but most of all the former Borg and Voyager favourite, Seven of Nine.

Having rescued Seven of Nine in the final moments of the previous episode, Picard now explains to her why they’re going to Freecloud. We discover Seven is a member of a group known as the Fenris Rangers who she describes as helping people no one else will. Picard sees them as vigilantes but still wants her skill and aid.

There’s a lot in this episode for fans of Seven. She was still learning how to deal without the collective and discovering her humanity when we left her. Now, it seems like she’s seen more than her fair share. She’s loved and lost and has diverted all of her effort and ability into this cause. It’s fitting as she’s had to discover her own humanity outside of Starfleet’s rules.

Once they reach Freecloud, we’re treated to our first taste of this incredibly un-Starfleet destination. Popup holograms targeting each of the crew (except a slightly sad Elnor) appear, showing us that commercialism is king. The crew sees Maddox has been captured due to an advert trying to sell him off to the Tal Shiar. Seven then reveals her plan to use herself as a bargaining chip for Borg parts.

After another cool Star Trek like scene with injections of science fiction medicine (or perhaps just straight up drugs, knowing Raffi) the crew get to work. Rios plays a somewhat famous pimp-like psuedo celebrity to broker the deal, complete with a feather in his cap. While Picard gets some sort of French space pirate getup (accent included), Seven gets handcuffs and a bag over her head, and Elnor–not knowing how to lie due to his upbringing–plays himself.

Rios manages to set up the deal in an entirely science fiction bar. This businesswoman, known as Bjayzl makes an appearance to complete the transaction but Picard quickly discovers that she and Seven have history and this deal isn’t what it seems.

Seven reveals they were once very close. Bjayzl turned on her to try to harvest the Borg technology but Seven managed to get away. Unfortunately, the former Borg had others like her she cared for, including one she viewed as a son. She’d told Bjayzl about him and Bjayzl found and harvested him for parts. Seven, in a position to kill Bjayzl agrees to take Maddox in exchange for her life, and leaves with the crew and Maddox back to the ship.

Picard and Seven have a brief conversation about being former Borg where they agree that you never fully regain your humanity, but you can keep trying, every day. She then lies to him and returns to the nightclub with weapons to finish her revenge. “Picard still thinks there’s a place in the galaxy for mercy. I didn’t want to disillusion him,” she says to Bjayzl before ending her life, while Picard sits none the wiser on the La Sirena.

This brief arch perfectly shows us Seven of Nine in her current life, but she wasn’t the soul focus of the episode. Raffi, who wanted to be dropped at Freecloud finds her son in an attempt to reunite despite her drug addled past. He challenges her about her obsession with the conspiracy regarding the AI attack on Mars and she can’t let it go. It gives us some insight into what she thinks might have happened. He refuses to take her back and so she returns to the ship to remain a part of the La Sirena crew.

Perhaps the biggest surprise of all this episode comes from the ever ray of sunshine Dr Agnus Jurati. We discover that her and Maddox were not only colleagues but also seemed to be in a genuinely loving relationship. When she sees him back on the ship in sick bay, however, she does the unthinkable. Jurati turns off all the systems keeping him alive, only saying “I wish you knew what I know. I wish they hadn’t shown me,” in relation to Dahj and Soji. Could it be that the Zhat Vash have gotten to her with their unbearable secret and loathing of the AI?