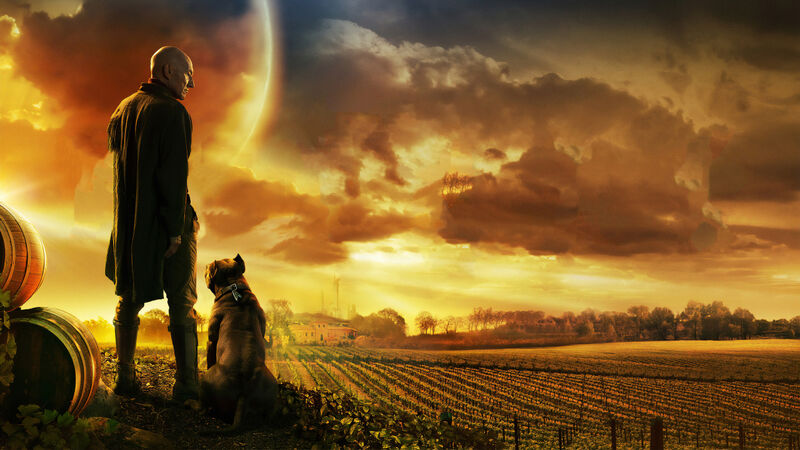 From its announcement, Star Trek: Picard had many Trekkies, including myself, excited. For a large group of us, this is the Captain that introduced us to Star Trek. And for those that started with the original series, I still always felt that The Next Generation showed us what Starfleet was meant to be. Humanity at its best, always ready to help, always able to see justice and act accordingly. Captain Jean-Luc Picard showed me a future we should aspire to, where man boldly, and kindly goes. This first episode of the latest introduction to the Star Trek universe doubles down on that, and introduces us to some seriously solid sci-fi while doing so.

Immediately it hits us with stunning space vistas and a look at the iconic Enterprise set to “Blue Skies,” a song from the 1920s. This is such a beautiful introduction because it shows us exactly what we’re in for– a Star Trek that still has that old soul but in vibrant new fidelity. We see Picard and Data, both much older than they were in TNG, engaging in a game of poker. It is another familiar setting for old school fans, but very quickly we can tell that something is slightly off about this. I love how in this episode, titled “Remembrance,” fans are rewarded for their familiarity at every twist and turn, and this little game was the first of many.

Picard awakes still old and perhaps a little fragile, to his lovely dog Number One and his stretching vineyards at Chateau Picard. Another great nod for fans of the series who are already familiar with his home. This countryside paradise is quickly juxtapositioned with a futuristic city where we are introduced to a young couple sharing wine, almost as though these moments are linked at opposite ends of a life cycle.

There’s a sudden turn into high action as we are exposed to the incredible and inhuman combat abilities of the young girl. One of her would-be captors describes her as ‘activated” just before she defeats them all with ease. Flickers of Picard’s face enter her mind before making way for a stunning intro sequence blending familiar sci-fi imagery with serene music before melting away back to the vineyards. It feels like a Picard story, I believe it’s Star Trek, and I’m already all in.

As the show moves forward we are slowly fed pieces of the puzzle. The caretakers of his home appear to be Romulan staff, which probably pricked up the interest of most fans as they are generally considered enemies in Star Trek stories. It’s clear they have a great reverence for Picard and before heading off to an interview one remarks “Be the captain they remember,” and I’m certain he’s breaking the fourth wall, just a little.

This interview takes the form of an emotional expedition from Picard where we are finally given some insight into what has happened since we last left him. We learn of a supernova which devastated the Romulan population and of Starfleet’s initial efforts to help. It’s clear there’s still hostility towards Romulans as when Picard describes the lives that were at stake the reporter clarifies “Romulan lives.” Picard replies simply and perfectly “No. Lives.”

During these rescue missions some formerly friendly synthetic life forms took their chance to take down defenses and attack Mars. “92,143 lives were lost” says the reporter, this time unspecific of what kind of lives they were before revealing that this event led to a ban on synthetic life forms and caused Starfleet to abandon the Romulan rescue mission. This in turn caused Picard to resign on moral grounds.

The “activated” young girl, pushed forward by images of Picard finds her way to the Chateau and introduces herself as Dahj. She’s confused and scared but earnest, so of course Picard takes her in. The ban on synthetics combined with her abilities outlays a pretty clear path of where this is going but for fans there’s just a little bit more. An episode of TNG features Lal, a daughter created by Data who surpasses him, even experiencing emotions but ultimately dies. Lal was allowed to choose her own looks but she shared the same short black hair, and with everything else, I couldn’t help but wonder about Dahj,

Seconds later in Picard’s dream we see Data painting in the vineyard. Data was often found painting but this time it is a picture of a girl without a face. Picard awakens to learn Dahj has gone and looks up at the same painting in his room. Once again, “Remembrance” rewards the suspicions of clue hunting fans without leaving newcomers in the dust and further moves to clarify the theory without being too tedious for those who’ve caught on. Picard takes a trip to San Francisco to Starfleet HQ to view the archives which supply more fun throwbacks for fans but more importantly teaches us the painting is called “Daughter.”

Dahj, once again propelled by her programming, finds Picard in San Francisco where he explains her origin. It feels like the beginning of a wonderful realisation and adventure as Dahj starts to understand who she is. Picard expertly puts aside her aversion to androids, and pledges himself to help her. It’s moving, pure, and full of hope but it also doesn’t last.

The beautiful moment is interrupted suddenly by the looming threat on Dahj’s life. Once again we are treated to the spectacle of her abilities which also really drives home that Star Trek now not only has the technology but also the budget to pull off some impressive visuals. In the fight we discover these attackers are also Romulan, leaving us to wonder what the connection between the Romulan supernova and the defecting Synthetics on Mars really is.

Like the moment before it, Dahj is also taken suddenly and explodes into oblivion thanks to a last ditch effort from a fallen attacker. It’s not often Star Trek is willing to pay such a high price for a story, especially if they’re not wearing a red shirt and after all the previous scenes I felt Picard’s loss in my core.

Feeling in her debt, and possibly inspired by his old android friend, Picard goes looking for answers. He finds The entertainment site where fans come first. of scientists getting close to recreating fully flesh and realistic androids before being shut down when synthetics were first banned. He learns that in these proposed perfect synthetic beings a part of Data could live on. He also discovers they’re created in pairs, bringing back that that hope for the future which Star Trek and Picard have always so perfectly encapsulated.

The final scene gives us one last glimpse of that hope by showing us Dahj’s identical twin, Soji working on a Romulan Reclamation facility. We’re also introduced to Narek, a Romulan who despite only having a brief introduction seems to be masking his intentions. This mystery is further shrouded in bad omens as the camera zooms out, revealing the center is an imposing Borg cube. The Borg remain one of the most formidable enemies Starfleet have ever faced and also have a special connection to Jean-Luc as he was once assimilated into their ranks.

In these final moments Star Trek: Picard provides us with a sense of optimism for the story but also dread. A huge Borg cube is enough to make most Trek fans understand the potential danger but having it mined by Romulans, who potentially resent Starfleet and Earth for abandoning those rescue missions we previously learned about could have harrowing repercussions. I’m so curious to find the link between the Romulans and the Synthetics and explore the Star Trek universe from this unique position. Star Trek: Picard feels like a series which will continue to balance our hope and our fear perfectly as it continues to boldly go.