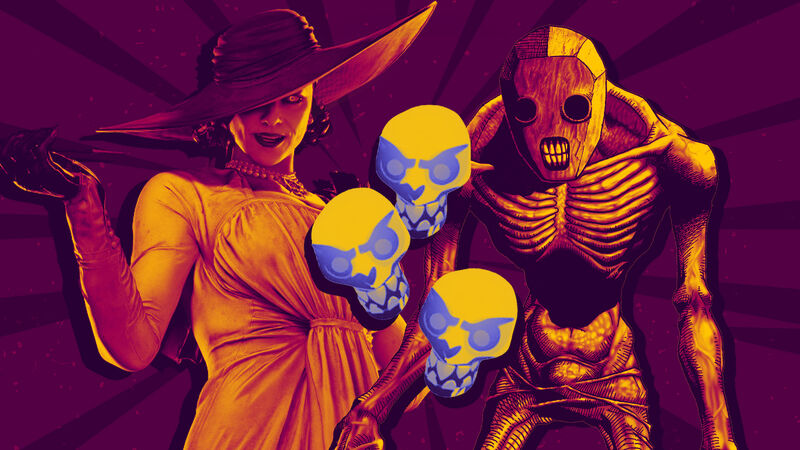 It’s spooky season once again, which means gamers everywhere are looking for thrills, chills, and plenty of scares. Even if you aren’t the kind of person who enjoys horror games, you can find all sorts of monsters lurking in your favorite system. But which foes are the most fearsome? We’re taking a look at every classic gaming monster we could remember to figure out which are the most terrifying of all.

Hands are a favorite enemy type in video games, and with good reason: they’re unsettling! An unsupervised hand is, however, more concerning than it is scary. Where’s their person? Are they lost? Am I responsible for this floating hand now? I barely have my life together enough to be responsible for two hands, and you’re telling me now I have to figure out what to do with a third? Also, they aren’t exactly fearsome: the only hands I fear are my own, because I’m very clumsy. Floating hand enemies can’t do much to my HP, but that time I accidentally burned myself making scrambled eggs definitely knocked a point or two off the top.

Okay, they aren’t the most terrifying enemy you’re going to stumble upon, but big rats aren’t exactly un-scary—after all, their undomesticated IRL counterparts are pretty yucky and famously good at spreading disease. In games, rat enemies can also spread disease; in Elder Scrolls V: Skyrim, a Skeever bite will saddle you with Ataxia, which doesn’t do much, but everyone who sees you will tell you how gross you look. It’s not very scary, but it does wear on the confidence.

Big spiders are, much like their rodent brethren, mostly just annoying, and scary mainly because they are also scary in real life. Video games are chock-full of car-sized spiders, but typically they don’t move super fast and want to be left alone to eat in peace, which I find pretty relatable.

A popular video game enemy type is just, like, a normal dude. Sometimes he’ll have long hair (like Sephiroth) or a big sword (like Sephiroth) or devastating good looks (like Dr. Robotnik), but all in all—he’s just a guy, and I’m not afraid of that, because I probably have an even bigger sword or magic or the ability to run really fast or whatever. He should be afraid of me.

Mummies are basically Just Some Guy in a costume. Okay, technically, they’re zombies, but that cute little outfit they wear isn’t super practical for chasing down their enemies. Honestly, the scariest thing about them is their collectively terrible sense of style.

Dragons are massive, mean, and only sometimes voiced by Charles Martinet (but who isn’t these days?). The scariest thing about them is that they’re big and can bite you clean in two; however, at a certain point in Skyrim, one of the most notable dragon-heavy games you can play, you become strong enough that they can’t really kill you, essentially transforming them into an annoyance rather than a real threat. As for Metroid, Ridley saved all the really scary shenanigans for the manga, so as long as I stick to the games, I doubt I’ll be seeing space-dragons in my nightmares.

Okay, things are starting to get a little scarier. Werewolves might be Just Some Guy most of the time, but when they aren’t, you’d better hope you’re well-armed. They make loud, terrifying sounds; they’re super fast and strong; and they look like doggies, so emotionally it can be taxing to fight back.

Notable examples: The Witcher, Dark Souls, Left 4 Dead (technically the Witch is a zombie but she’s scary and she’s called “the Witch” so she counts)

Witches can be a mixed bag in gaming. Sometimes they’re on your side! Sometimes they’re you! But, when they’re evil, things can get pretty sticky. Bring an umbrella if you have to take on the Wicked Witch in The Witcher (she throws soup), and heaven help you if you startle Left 4 Dead’s Witch. Let the lady cry in peace—or else.

Honestly, the scariest thing about vampires is their irresistible sex appeal. The entire internet was obsessed with Lady Dimitrescu when the first looks at Resident Evil Village dropped, and it wasn’t because she was so dang terrifying. (It’s because they wanted her to step on them.) Ultimately, the vamps weren’t even the scariest thing in RE8—but, of course, it’s hard to be the scariest monster in a game when Donna Beneviento’s huge baby keeps popping out of doorways and slobbering all over everyone.

Look at this thing. Are you serious right now??

I may regret writing this, but I’m not all that afraid of an IRL robot uprising. (Note for future robot overlords: I am absolutely kidding. I fear you so much. Please set my alarm for 9AM. Thank you, Siri.) While most real robots can be easily felled by a glass of water and a clumsy ding-dong who wasn’t supposed to keep liquids by her computer, gaming robots can be a little tougher to take out. Smart robots, like Portal’s GLaDOS, know everything about everything, and can use their database of knowledge to absolutely wreck you. Even when robots aren’t wielding superhuman intelligence, they can still be pretty terrifying. Truly, the only thing scarier than being chased through Utah by a pack of Horizon: Zero Dawn‘s Thunderjaws is having any kind of conversation with noted psychopath Nil, who regularly drops the most horrifying dialogue I’ve ever heard in a video game, and he’s a friend.

Nil, buddy, what are you even talking about?

I DO NOT HAVE TO EXPLAIN THIS ONE.

Notable examples: Dark Souls, The Legend of Zelda, Grim Fandango (Manny is his own worst enemy)

Skeletons are pretty spooky! It’s bad enough you’ve got one piloting your skin-suit around every day; they get exponentially scarier when they’re outside of a body. Get caught outside after dark in any Legend of Zelda game, or inside a cave at any time of day in an Elder Scrolls entry, and you’re in for a spine-chilling nightmare. Skeletons are scary because, theoretically, they should be way easier to kill than they are. A real skeleton wouldn’t be able to move around without helpful necessities like muscles/skin/sentience, but these boney boys don’t seem to care about pesky annoyances like “physics” and “realism.” In video games, skeletons can wield weapons, chase you hither and yon, and (if you’re playing a classic ‘90s point-and-click adventure) even fall in love. Who knows what else they’re capable of?

There’s nothing more terrifying than uncertainty; what makes demons so scary is that you truly have no idea what they’re capable of. Are they fire demons? Poison demons? Do they look like sexy ladies, messed-up animals, or big gross blobs? Demons come in an upsettingly wide variety of shapes and sizes, with wildly different power levels to boot. But, if terrifying demonic baddies like Agony’s Baphomet or Devil May Cry’s Mundus are any indication, just looking at these freaky fellas is half the battle.

Notable examples: Resident Evil, The Last of Us, Half-Life

Zombies have been popular video game monsters for pretty much as long as video games have been around. Whether you’re hopping fences in 2D frustration-fest Zombies Ate My Neighbors or sitting down to dinner in Resident Evil 7: Biohazard, these munchy monsters are sure to keep you on your toes. And don’t let Night of the Living Dead lull you into a false sense of security—most video game zombies are fast. And, even if they’re more prone to shambling than sprinting (like Legend of Zelda: Ocarina of Time’s shrieking redeads), they’re still plenty able to scare the absolute bejeezus out of you.

Here’s the thing about ghosts: they’re right behind you. From Pac-Man’s Blinky et al to P.T.’s Lisa, one thing you can count on with these ectoplasmic enemies is they’re just, like, really great at creeping up behind you and scaring the pants off of you. (I still have nightmares about F.E.A.R.’s sneaky little girl ghost, Alma.) Ghosts are difficult to kill—sometimes you can’t even hurt them. They don’t have to follow the rules of the map like you do, popping through walls or materializing in front of you while you desperately search for a door like the corporeal meatsack you are. With ghosts, you just have to hope they’re the kind you can hit—because they can always hit you. Oftentimes, the best you can do is get your flashlight, find an exit, and, for the love of video games, don’t turn around.