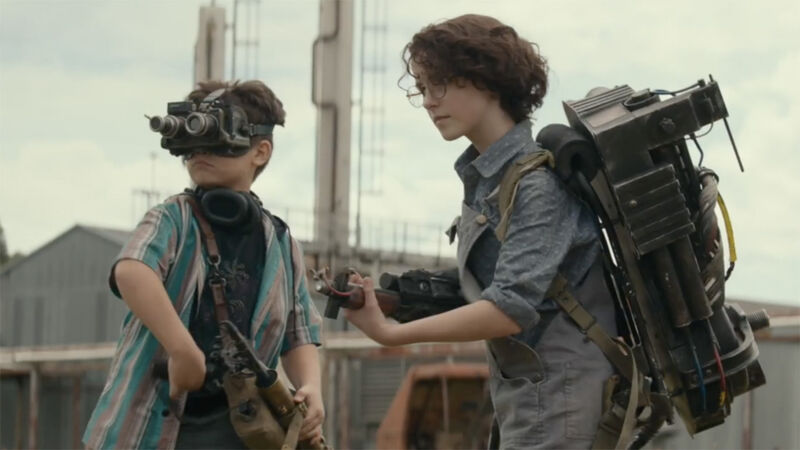 If there’s something strange, in your neighbourhood, who you gonna call? Sorry, Peter, Ray, Egon, and Winston aren’t around to take your call right now. Maybe you’d like to speak to paranormal investigator Rebecca Castaneda instead? She’s a real-life ghostbuster, of sorts.

“I can’t remember a time in my life where I wasn’t fascinated by ghosts,” says Rebecca, who is based in LA. “My family used to go ghosthunting when I was a kid! When I got older, I got into horror movies. Then, when they stopped being scary, I needed to get my fix from the real thing. I’ve lived in a few places that were haunted now…”

“Well, I grew up in North Carolina and I lived in Chicago, and both of those places are very old and very haunted. The house I grew up in was very creepy. My mum used to hear people running around upstairs. The dog used to get freaked out. I saw a shadow person in my room once. I got up to approach it and it ran away from me. I’ve sometimes wondered whether it was more scared of me than I was of it.”

“But the weirdest thing… the thing I’ve never been able to explain… One day my sister says, ‘Come see this’. I follow her and there’s this orange orb just flying around the room. That was very, very weird…”

Fishing in the Dark

Rebecca is chatting to Fandom ahead of the release of Ghostbusters: Afterlife, and fortuitously we were also able to speak to the cast of the show to ask them about their experiences of the paranormal. But more from them later.

Like any sane, logical person, Rebecca is a fan of the Ghostbusters franchise, but she says it bears little relation to her experience of ghosthunting. “When I started actually trying to seek out these experiences, I quickly realised that if they were to base a Ghostbusters movie on what actual paranormal investigators do, it would be very boring. No proton packs. No containment units. And we look for ghosts, I’ve never busted one. Sometimes a ghost hunt is just a bunch of bored people sitting in a dark room for twelve hours. It’s a bit like fishing, but in the dark.”

Can you tell us more about a typical ghost hunt?

“Sure! Most of the time, we’ll set up a central hub where someone can always be watching the five or six static cams we’ll set up around the building. That person is tasked with marking and timestamping anything they see that might be interesting. They’re also responsible for knowing where everyone on the team is. That way we’ll know if those footsteps upstairs is one of the team or… hopefully… something else.”

“Well aside from the obvious walkie-talkies and torches and stuff, we have a bunch of digital recorders to do EVP sessions. That’s short for Electronic Voice Phenomenon which is basically the practice of trying to capture the voice of spirits. It can be laborious, because it’s often us asking questions and sitting in silence not getting anything back. But it’s my favourite because it’s so creepy. I think it provides some of the best evidence that ghosts exist.”

“They have a thing called the Spirit Box, which changes radio signals every second, and it’s supposed to be impossible to actually hear a word because it’s switching between channels so fast and if you do hear a word or a sentence, it’s a ghost… I don’t know what the validity there is. I don’t know how it makes sense. But I’m glad that people are still into it.” — Finn Wolfhard, who plays Trevor in Ghostbusters: Afterlife

Rebecca says that she’s “50/50” on the validity of the ‘Spirit Box’, crudely speaking a modified AM/FM radio that claims to pick up frequencies emanating from the spirit world. “Half the time it’ll just cycle through nearby radio stations, but every so often it’ll throw up something that’s really interesting. This one time, we were doing this investigation in an old warehouse in Chicago. Legend had it that the mob used to use it. I asked a question and clear as day I heard someone say, “C––”. We packed up and left immediately, it was very clear that whatever it was that said it didn’t like me very much.”

Rebecca is also fond of a piece of kit called a REM pod, REM being short for ‘Radiating Electro-Magneticity’. With an antenna covering a range of 360 degrees, the machine is said to detect disturbances and changes in the area surrounding it. On top of the device are four bulbs. “It’s really cool,” she says. “You can get really intelligent responses with it. You might ask a spirit to light up a bulb for ‘yes’, or three of them for ‘no’ or whatever.”

It’s worth asking, has Rebecca ever felt danger delving into the unknown? It’s one thing being scared, another feeling like you’re actually under threat. Has she ever met her Gozer? She shudders.

“We were in Farrar, Iowa, which is a super tiny town, and we were investigating a school. There were reports of a spirit called ‘The Principal’, who was haunting the gymnasium area and supposedly hated women. The team we had was made up of two men and three women. Whenever the women went down to that area, we didn’t feel good at all. We felt sick. As soon as we left we’d all feel fine. I questioned whether it was just me, but all the women felt it and none of the men did. That was so weird.”

The ‘Ghostbusters: Afterlife’ Cast Have Had Brushes With Ghosts

With the release of Ghostbusters: Afterlife imminent, it’s worth asking if any of the cast had any experience with ghostbusting off set. And, with this being Fandom, we got the opportunity to do just that.

“I’ve experienced something I cannot explain to this day,” says Logan Kim, who plays Podcast in the movie. “I was in my bedroom, and I heard my curtains rustling. I stood up and was like, ‘Well, what’s going on here?’ I didn’t go back. I’ve seen too many horror movies to be that dumb and check out the creepy noise. I went to my brother’s room to make sure he wasn’t playing a prank on me but he was asleep. I didn’t know what to do, so I just went downstairs and fell asleep on the couch.”

“I’ve always been interested in that stuff,” adds Carrie Coon, who plays Egon’s daughter Callie in the film. “I was a kid who liked to be scared. I loved vampires and werewolves and mummies and ghosts when I was growing up. And I lived in a creepy old farmhouse which my family had lived in since the 1800s. We were always looking for secret passages. I’m completely open to the possibility that ghosts are real.”

“Generally speaking,” she says, “my attitude with ghosts is that they’re not dangerous and we can all have a good time together. Be respectful. Be cool. But most importantly, have a good time!”

For more in-depth IRL reading, check out the article below, inspired by Eternals, in which we chat with a UFO expert about what a real-life alien visitation could look like. Would it be like we see in the movies? Perhaps…