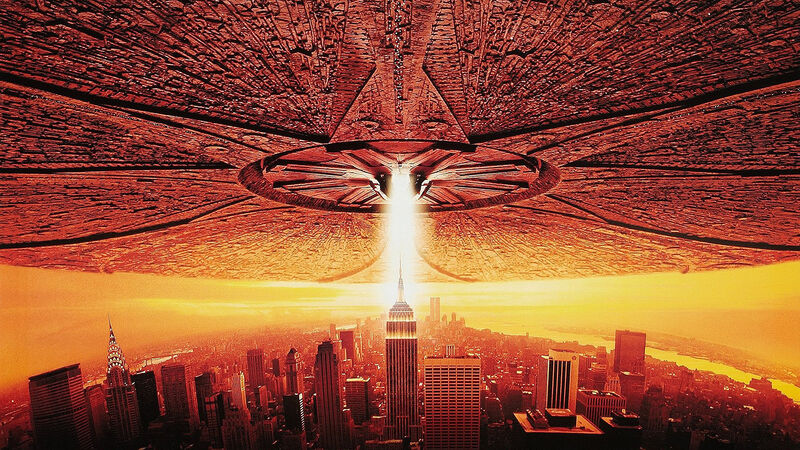 Roland Emmerich’s 5 Best Methods to Destroy the Earth: From ‘ID4’ to ‘Moonfall’

Once upon a time disaster movies were contained to skyscrapers, airports, ski resorts, and cruise ships. Eventually though, thanks in large part to the films of Roland Emmerich, the genre spread to world-killing extinction-level events. There was no part of the Earth that was safe because it was the planet itself that was in danger. And now with, Emmerich’s Moonfall headed our way, Earth is going to square off against its own natural orbiting satellite. Yup, it’s Planet vs. Moon and only Halle Berry and Patrick Wilson can save us all from the impending MoonSplat™.

Some directors have specific calling cards. Wes Anderson’s got that hyper-detailed storybook quirk. Michael Bay has the low 360 spin and explosions galore. And Emmerich… Well, Emmerich rose to prominence on the backs of global landmarks getting obliterated by powerful forces beyond the control of humanity – be they extra-terrestrial laser blasts or Mother Nature herself culling the world’s herd with a mighty swipe. Sure, he made some movies where the fate of civilization itself wasn’t in danger, but they’re not quite as memorable.

From the wild alien assault of 1996’s Independence Day to the director’s latest, Moonfall, here’s a quick and dirty do up of Roland Emmerich’s preferred ways to ravage and ruin our entire world. Godzillas, tsunamis, earthquakes, super storms – look, this guy has it out for Earth and isn’t exactly shy about it.

Emmerich found a big foothold in Hollywood with 1994’s Stargate, in which an alien civilization (which influenced our own world’s ancient Egypt), threatens to send a massively overpowered nuclear bomb through a space portal to wipe out Earth.

He then upped the ante in 1996’s Independence Day with a full-scale alien attack on Earth by a hostile alien horde bent on nothing but the eradication of all humankind. There was no stealth infiltration of Earth or even the false pretense of allyship here. These galactic ghouls just swooped in on ginormous flying saucers and proceeded to whoop all our asses

Despite impossible odds though, humanity prevailed, the aliens took a shellacking, and the path forward became all about rebuilding civilization and rebranding as a world with reverse-engineered alien tech.

Twenty years later, Emmerich brought the alien aggressors back, in 2016’s Independence Day: Resurgence, for another stab at decimating Earth.

This time London, Singapore, Dubai’s Burj Khalifa (which is uprooted and hurled AT London), and Kuala Lumpur’s Petronas Towers became the latest landmarks and cities to meet their demise at the hands of intergalactic a-holes.

Emmerich’s follow up to Independence Day wasn’t the global wipe out that its predecessor was, but certainly the idea was that if Godzilla was left unchecked, many more cities besides the Big Apple would get trashed.

This reboot of the legendary movie monster left little-to-no Manhattan landmarks intact. Madison Square Garden, the MetLife Building, the Chrysler Building, the Flatiron Building, and the Brooklyn Bridge all fell to the gnashing jaws, crashing claws, and tumultuous tail of this (very weird looking) Godzilla, which was an iguana mutated via French underwater nuclear testing.

Despite ‘Zilla dying in this one, the world isn’t let off the hook. The final moments of the film show a surviving Kaiju egg hatching, unleashing a shrieking baby Godzilla, ready to grow enormous and exact vengeance on the populace that put down its parent.

As Seen In: The Day After Tomorrow

For 2004’s The Day After Tomorrow, Emmerich decided to get a little more science-y, ditching aliens and monsters as the mechanisms for leveling entire cities and instead using – er – our own doomed future?

In The Day After Tomorrow, the unthinkable (yet also inevitable) happens when climate change warms the Earth’s temperature so much that the  Larsen Ice Shelf breaks away and causes a chain reaction of extreme weather events – and a disruption of the North Atlantic Ocean circulation – that result in a massive global cooling, plunging us into a new Ice Age.

Got all that? No space lasers. No giant lizards stomping around New York. Just good old fashioned disruptions to our extremely delicate ecosystem and biosphere. Including…

Multiple tornadoes touch down in Los Angeles, once again decimating the poor Capitol Records Building (but also adding the Hollywood Sign to sweeten the pot).

A savage superstorm over North America causes water levels to swell and a tidal wave to pour over the Eastern seaboard, violently flooding all of New York City and chasing Jake Gyllenhaal and Emmy Rossum into the New York Public Library for safety.

Massive waves aren’t the only thing East Coasters suffer through though. The storms pull frozen air from the upper troposphere into their center, flash-freezing anything caught in their path with temperatures below −150 degrees Fahrenheit! Manhattan, already trashed, is now frozen solid.

Emmerich definitely took the “kitchen sink” approach to 2012, a movie that plotted to make Earth completely uninhabitable by the time it was through. At least Emmerich’s previous films left room for humans to rebuild things and assimilate to new conditions (after mass casualties, of course).

2012, played off the pop-hysteria pseudoscience of the 2012 Mayan Apocalypse, which predicted the end of a 5,126-year-long cycle would result in various models of global destruction, from black holes to planetary collision. Since there was no one predominant idea about how the world would end in 2012, Emmerich got to let his impish imagination run wild. In this case… solar flares are heating Earth’s core causing the dreaded POLAR SHIFT!

This means all rules are out the window.

The entire West Coast sinks into the Pacific Ocean after the mother of all earthquakes.

Next… the Yellowstone supervolcano erupts, sending a world-smothering ash cloud speeding after our heroes as they fly off to find a rescue Ark to save them…

Basically, quakes and megatsunamis are rocking the entire world, turning the planet into soupy crumbs.

The tasty waves in 2012 aren’t just flooding cities, they’re covering them – and entire mountain ranges. And in a new twist on an old ID4 classic, the White House gets taken down by a monster 1500-meter tsunami wielding aircraft carrier USS John F. Kennedy!

As Seen In: Moonfall

Though we don’t know the full details yet of what all’s going on in Moonfall, we do know that something (from the trailer, it looks to be alien) causes the moon to leave its orbit and start closing in toward Earth.

All of this means is that not only might the moon actually collide with Earth, but the gravitational disturbance of the moon heading to Earth will surely cause some chaos and calamity.

Which presumes, once more for those in the back…

And now, the added bonus of…

If you’ve seen the new Scream, click on the image below as we do a deep dive with the directors on all the big spoilers from the movie!