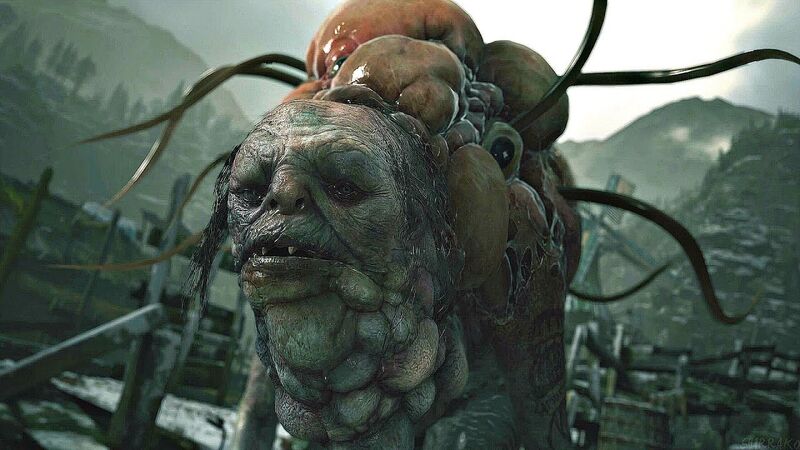 I’m a horror fan through and through, raised on a steady diet of Edgar Allen Poe, Goosebumps, Stephen King, and slasher marathons. However, I’m also a coward. (People contain multitudes.) What I can handle easily in movies and television makes me completely fall apart in more personal mediums—for instance, video games. I have an incredibly low tolerance for horror games, especially when they come with a first-person point of view. It’s like the monsters are coming right at me! It’s just too much pressure!

However, despite my better judgement and knowledge of my own weaknesses, promotional clips of Resident Evil Village lured me in with their gothic style, creepy-yet-provincial setting, and promise of enormous vampire ladies ready to steal my heart (and the rest of my organs, too). Past Resident Evil games were not easy plays for me (I’m looking at you, Marguerite Baker), but I just couldn’t resist.

After the game released in May of this year, many critics and fans alike found it a great deal less scary than its predecessor, Resident Evil: Biohazard. Even the development team made a statement, declaring that they deliberately toned down the scares so more sensitive players could enjoy the game. Well, they didn’t factor in one thing: I am a big wimp, a massive scaredy cat ready to jump out of my skin at any errant loud noise or an aggressive music cue.

So, knowing that I was likely to cover my eyes, knock over any drinks sitting within flailing range, and scare quit (rage quitting’s cowardly cousin) more than once, I decided to sit down and play the damn game anyway. In honor of the Halloween season, I’ve put together a list of thirteen moments in Resident Evil Village that made me scream out loud. Don’t mind the terrified shrieking; that’s just the sound of me having a grand old time.

13. Jump Scare at the Window

Early on in the game, the player comes across a house in the village with a sign reading “Do Not Enter.” Of course, you’ve got to enter that house. Come on. Once inside, after a bit of exploring, the player finds a note instructing, “Look out the window.” Looking out this window at the correct angle reveals the numbers needed to open a combination lock. While the player is focused on collecting the numbers, a Lycan suddenly appears right outside. While it doesn’t pose much of a threat, it’s deliberately startling, and takes advantage of the fact that the player’s focus is on solving the puzzle.

While on the journey to defeat boss Salvatore Moreau (who, by the way, has arguably one of the grossest character designs in the game—he looks like how accidentally touching wet food while washing your dishes feels) the player must sail a boat through tumultuous waters. I’m already nervous about what might be lurking beneath the surface of a dark and murky lake when I’m not playing a horror game, so I had a feeling something scary was ready to greet me here. I was right. As the player is getting used to captaining the boat, a massive slithering sea monster breaks the surface of the water. Things go from bad to worse when Moreau comes out of its MOUTH. I don’t even want to think about what that guy tastes like.

This one is honestly a little embarrassing. While exploring the basement of a cottage and looking through a wardrobe for anything that might be helpful, a sudden loud and foreboding sound of crashing from the floor above breaks the silence. I didn’t even see anything scary and I jumped. Fair play, Resident Evil. You got me good.

No! No!!! Just look at that thing and tell me your fight-or-flight response didn’t immediately activate. I didn’t like a scary fetus creature in P.T. and I don’t like it any more now! In fact, I hate it. Following in the footsteps of monstrous baby creatures before it, the fetus stalking around House Beneviento is horrible. It crawls toward you with distinct malice, crying in a warbling voice that makes my skin crawl, through a gaping maw big enough to swallow your head whole. And you just know it wants to. I hate it, I hate it so much.

You can laugh at me for this one. It’s fine. I won’t get mad. While learning the game’s hunting mechanic, the player has to investigate around the same cottage from the beginning of the game. There, main character Ethan Winters enters a barn, and—what a surprise—there is a squealing pig waiting to scare the hell out of me. Sure, there are plenty of actual monsters skulking around the village with murder on their minds, but the pig made a loud noise when I didn’t expect to hear a loud noise!

Poor Ethan, and even poorer Ethan’s hands. After Biohazard, you’d think Ethan’s limbs had been through enough. But there’s no relief to be found here! In a shocking moment that comes almost completely out of nowhere, Lady Dimitrescu suddenly slices into Ethan’s arm, cutting it in two. First his wife gets shot in front of him, then his baby gets kidnapped, and now his arm gets cut off. Right when he was using it, too! Tough luck, man.

House Beneviento is where all of my worst fears live, apparently. The doll workshop is powered by nightmare fuel, featuring dangling porcelain limbs and, of course, dolls. These dolls look mostly normal, if extremely creepy and ghost-filled, at first. However, some of them start to glitch and flicker as the player moves through the house, and, once they’ve gone into attack mode they sprout metal spider claws just itching for some stabbing. These things are awful, but they’re nothing compared to their leader…

When the player picks up the flask in House Beneviento’s doll workshop, the lights go out and a creepy little voice says, “I’ve been waiting for so long.” That ominous greeting signals the appearance of my worst enemy: Angie. That Annabelle-looking face, that voice, that shrieking laugh, those soulless eyes that look like they know all my worst fears… I was already on edge from the other dolls and then this thing is here, floating around the room, mocking me to my face and bleeding human freaking blood? I’d like to shove Angie into a wood chipper and use the remains to fill a deeply haunted flower bed. That’s what I’d like to do.

Don’t call it a comeback! Please, I don’t want it to come back. When the player grabs the fuse in the bedroom of House Beneviento, the lights will go out and plunge the room into absolute darkness. If this wasn’t unsettling enough, after leaving the bedroom, the giant monster fetus comes back, crawling even faster than it did the first time. The only way to get away from it is to go back to the bedroom and hide under the bed, listening to it crawl around looking for you, crying that awful cry. Did I mention how much I hate it?

4. Panic! In the Blood Wine Cellar

Castle Dimitrescu doesn’t just house some of the most stylish blood drinkers around, it also comes outfitted with an incredibly creepy blood wine cellar. There, the player learns about Lady Dimitrescu’s experiments on women, attempting to turn them into fellow bloodsuckers and more daughters for her little family. For most of the subjects, the testing goes horribly wrong, turning them into the deformed, mutated Moroaice that roam the castle. While moving through the blood wine cellar, one of the Moroaică bursts out of the thick red liquid, scaring Ethan and making me knock over my real-life glass of water.

The Lycans in general are frightening, with the massive, monstrous wolf creatures serving as the source of more than one jump scare throughout the early parts of the game. But, if you think those beginner wolves are bad, you have no idea how terrifying things can get. When entering Moreau’s territory, the Vârcolac, aka the bigger, badder variety of Lycan, jumps out of nowhere and does its best to rip out Ethan’s throat with its teeth. Bad dog! Bad!

2. Eat Your Heart Out

Ethan goes through a hell of a lot in this game, but no moment stressed me out more than a climactic confrontation with ultra-villain Mother Miranda. She makes herself known after the boss battle with Lord Karl Heisenberg, and quickly establishes that she is no one to mess with. She can shape-shift, teleport, and display other supernatural abilities. She’s kind of a girlboss—I won’t deny that—but she also ripped out Ethan’s heart while I watched helplessly and that wasn’t very cool of her. First, it completely caught me off guard. And, second: I was using that!

1. Every Time I Died

Okay, this isn’t technically one specific moment, but the same result happened every time. Like other Resident Evil games before it, Village has plenty of opportunities to meet a gruesome end, and I’m pretty sure I found all of them. Sometimes I perished at the hands (or claws) of Lady Dimitrescu herself, or the blade of one of her daughters. Another time it was a Lycan tearing me to bits with its teeth, or Heisenberg grinding me into “fresh American ground beef.” It was just a parade of horrible deaths, and the game rubbing salt into the still-bloody wound by reminding me “You Are Dead” before the Game Over screen. Thanks, bud. I know.

This one doesn’t really count because it wasn’t a scream of fear. It was a scream of excitement, of delight, of appreciation for her glamorous gown and penchant for tasteful accessories. She had me at “let’s see how special you are.” I was so excited to see this stylish vamp with legs that go all the way up that I didn’t even mind that she wanted to string me up like a stuck pig and bleed me dry. It’s fine! I don’t need my blood that much anyway! Besides, the shade of red compliments her skin tone so well.

In spite of all the fear, and all the times I woke up my cat, I had a great time with Resident Evil Village. The atmosphere is one of the best parts of the game—oppressively eerie, shrouded in an omnipresent dark fog that makes you feel like every door has danger lurking behind it. The variety of locations, from the lake to the castle, kept me on my toes and constantly surprised. It’s a nice twist on the formula of the previous games, a stylish and entertaining game in its own right, and a fitting addition to the franchise. And, unless your nerves are made of cotton candy like mine, you probably won’t find it all that scary.