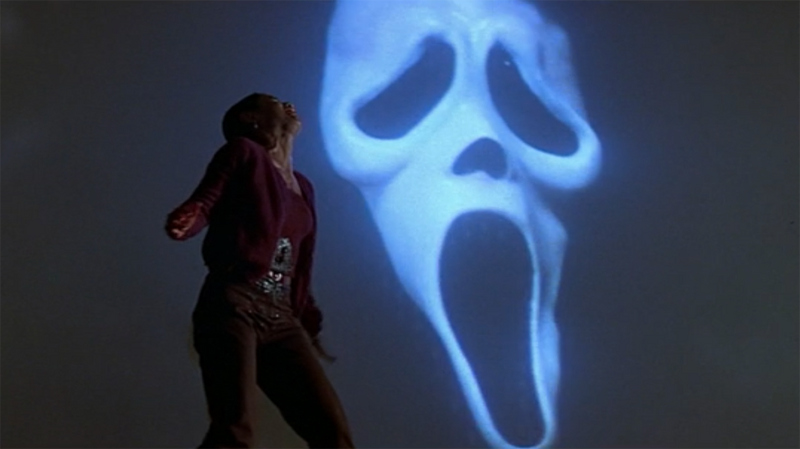 The ‘Stab’ Franchise: A Definitive History

It’s only natural that a series as post-modern and self-analytical as Scream would have its own fictional movie-franchise-within-the-movie-franchise, like an endless Russian nesting doll of parodies. After all, what better way to mock horror films than to invent your own series of them, one that can get as outrageous and silly as the joke demands, without having to worry about all that pesky stuff like character development and logical, narrative sense?

The Stab films — first introduced in Scream 2 as a fictional movie series based on the “real” events happening to the residents of Woodsboro, California — give Wes Craven and screenwriters Kevin Williamson and Ehren Kruger a space to satirize the horror genre in a larger-than-life way, while still keeping the main franchise relatively grounded. (Relatively!)

So before the NEW Scream (aka Scream 5 aka 5cream) arrives, and brings with it new updates to the Stab-verse, here’s a quick rundown of where the series has taken us so far.

After the initial Ghostface killing spree in the town of Woodsboro, depicted in the original Scream, reporter and eyewitness Gale Weathers wrote a sensationalized, tabloid-style chronicle of the events, titled The Woodsboro Murders. Sunrise Studios then purchased the rights to Weathers’ book and brought in veteran horror producer John Milton to develop it into a slasher film (with an eye toward a new franchise). He in turn brought in filmmaker Robert Rodriguez, who had recently collaborated on two projects with Quentin Tarantino: the anthology film Four Rooms and the vampire action-thriller From Dusk Till Dawn. (This last entry is likely what made Milton consider Rodriguez for the Stab gig.)

Rodriguez brought in Tori Spelling to play the lead role as Sidney Prescott, reflecting Sidney’s own casting prediction, made casually to friends during the real life Woodboro killings. The cast also included David Schwimmer as Dewey Riley, up-and-coming actress Jennifer Jolie (not a real life actor but an actual fictional character!) as Gale Weathers, Luke Wilson as Billy Loomis, and Heather Graham as Casey Becker, who like Drew Barrymore in the original Scream gets murdered during the infamous Stab cold open. (In the hyper-titillating world of Stab, she’s taking a shower top prep for movie night, rather than just focusing on the popcorn.)

The plot follows the basic outline of the first Scream movie, with few key largely shower-related deviations. A masked killer known as Ghostface stalks the town of Woodsboro. He makes Sidney Prescott his primary target, having murdered her mother Maureen the year before. At the end, Ghostface is revealed to be a collaborative effort between Billy and Stu Macher.

In a nod to Scream and its follow-up coming out within the space of a single year (albeit those two were technically at least in 1996 and 1997, respectively), Stab and its sequel were both released in 1998. It’s based on the events of the film Scream 2 and, once more, was inspired by a Gale Weathers book — in this case, College Terror. (She’s not super-great with titles.) Robert Rodriguez left the project — maybe to finally get The Faculty off the ground? — so John Milton brought in long-time (fictional) collaborators Jerry Rapp and Fred Rifkin to write and direct the sequel.

Spelling, Schwimmer, and Jolie reprised their lead roles as Sidney, Dewey, and Gale, while — going by Scream 3’s script, albeit not mentioned in the film — Christine Hamilton joined the cast as murdered Windsor College student Cici Cooper (who was played by Sarah Michelle Gellar in Scream 2). After the film, Hamilton started a real-life relationship with Cotton Weary, the innocent man whom Sidney had initially held responsible for her mother’s death before Billy and Stu’s involvement was made clear. Sadly, in the opening scene of Scream 3, both Cotton and Christine are murdered by the new Ghostface.

It’s worth noting that we never actually see any footage from the film Stab 2 in the Scream franchise. All of our knowledge about it has been pieced together from information we find out in Scream 3, when we finally meet John Milton and visit Sunrise Studios.

The first take on Stab 3 was set to be titled Return to Woodsboro, and would have been the first film in the series based on a semi-original story. Cotton Weary was set to play himself and get killed in the opening scene. Next, an original character named Sarah Darling (played by fictional actress Candy Brooks) would be murdered just before taking a shower, in a nod to Casey Becker’s death from the original Stab.

Gale Weathers was also going to get killed in this entry, along with a new character named Ricky Wafford, played by fictional actor Tyson Fox and inspired by the Scream character Randy Meeks. (Whew, that’s a lot of layers! Post-modernism!) Jennifer Jolie returned as Gale in Stab 3, though her co-stars Tori Spelling and David Schwimmer both left the series at this point. Young actors Angelina Tyler and Tom Prinze were brought in to take over as Sidney and Dewey, respectively, with Tyler beating out 50,000 hopefuls in a much-hyped talent search for the new Sidney.

A feud between John Milton and long-time collaborator Fred Rifkin prompted Milton to hire hot young music video director Roman Bridger to take over Stab 3. Sadly, it turns out, Bridger was the real, unwanted, secret half-brother of Sidney Prescott, who had never gotten over the emotional trauma of being rejected by Maureen years ago. He’d been secretly orchestrating the Ghostface killings from the very start, mentoring Billy Loomis as part of a fiendish revenge plot. Before being shot and killed by Dewey Riley, Roman managed to execute Christine Hamilton, Cotton Weary, Sarah Darling, Tom Prinze, Angelina Tyler, Tyson Fox, Jennifer Jolie, and John Milton. The massacre shut down production of Stab 3: Return to Woodsboro permanently and inspired Gale Weathers’ next book, Hollywood Horror.

Out of (minor) respect for the victims, Sunrise Studios took a couple years off before greenlighting a new take on Stab 3, which of course was based on Gale Weathers’ most recent tome. Stab 2 director Fred Rifkin returned, along with surviving actors Tori Spelling and David Schwimmer; as long-time Gale Weathers actress Jennifer Jolie died on the set of the previous film, Hollywood lookalike Parker Posey was brought in to replace her.

We don’t get a look at this version of Stab 3, but a poster that’s visible during Scream 4 indicates that it had a HUGE supporting cast, also including Rutger Hauer, Elizabeth Banks, Balthazar Getty, Charlize Theron, Jennifer Aniston, and Will Smith.

(Meanwhile, we have to guess there is some pretty intense interest in seeing any footage Roman Bridger shot of the first version of Stab 3, before he murdered his producer and his entire cast and then was killed himself. Did Sunrise ever consider doing a “tasteful” release of this in some form?)

Fed up with the infamy surrounding her name, Sidney Prescott eventually threatened to sue Sunrise over their continued use of her life story. (As well, people generally stopped trying to kill her, so there were no further stories to adapt or Gale Weathers’ books to license.) So the studio rebooted the Stab franchise entirely, starting a new original trilogy relating a fresh story. Fred Rifkin remained on board as director.

According to Woodsboro High student and Stab franchise aficionado Jenny Randall, the fifth film contains a time travel element and is widely considered to be the worst entry in the series by fans. Otherwise, not much is known about Stab 4 or its follow-up, Stab 5, and there’s no footage from either film in any Scream movie.

We never get a solid plot synopsis of Stab 6, and it’s not fully clear what year the film opened, though we can surmise it was likely 2007 or 2008. We see one sequence from the film in Scream 4: Two friends — played by Lucy Hale and Shenae Grimes — are about to watch the horror film Saw IV when they get simultaneous phone calls and Facebook messages from Ghostface, who then shows up and murders them.

Again, we only get to see one brief sequence from the seventh Stab film. This one opens with Kristen Bell and Anna Paquin playing pals Chloe and Rachel. They’re watching the opening scene of Stab 6 together and offering snarky commentary about the predictability of horror films before Chloe stabs Rachel in the gut with a knife. Which pretty succinctly makes her point; I mean, she didn’t see that coming.

OK, sure, that’s a pretty convoluted franchise, but hey, it’s based on actual events and sometimes production on the films themselves is interrupted by actual murders! So the fact that it’s still more coherent, timeline-wise, than the Halloween series is really saying something.

For more on Scream, click the image below to see what Skeet Ulrich (“Billy Loomis”) and Matthew Lillard (“Stu Macher”) had to say about the original film’s 25th anniversary.