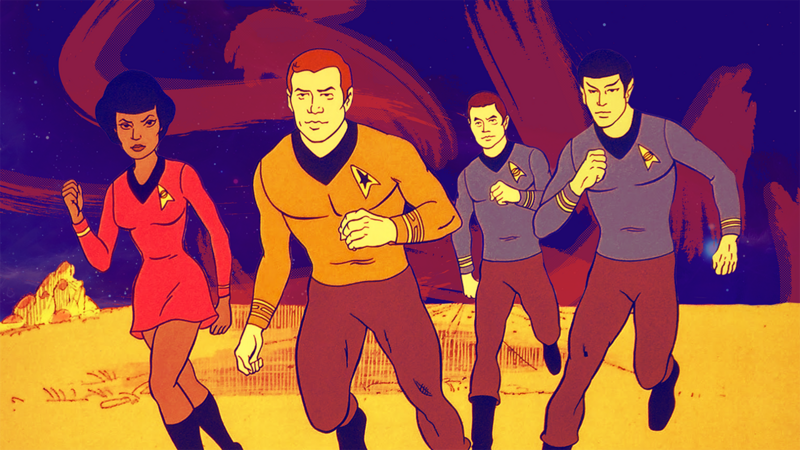 The Forgotten Lore of ‘Star Trek: The Animated Series’

Captain Kirk’s opening monologue set the stage for a five-year mission, yet the original TV run of Star Trek only lasted three. The abrupt cancellation of The Original Series (TOS) left fans in shock, and the creative team behind it still had a huge stockpile of scripts and ideas for future shows that they feared would go to waste. But all was not lost – thanks to an offer from NBC to develop an animated children’s spin-off, Star Trek would live again.

Star Trek: The Animated Series (TAS) made its TV debut in September 1973. TAS saw the return of almost all of the key cast members voicing their iconic characters, and series veteran script-writers were given the freedom to tell stories on an unprecedented scale. As the latest addition to the Star Trek stable, Picard, expands on Star Trek mythology, we dig into the forgotten lore of TAS.

One of the great strengths of the medium of animation is that the special effects budget is essentially unlimited – if you can draw something, you can make it real.

Consider the case of ‘Bem‘, an episode of TAS that was originally planned for Trek’s live-action TV run. This episode was to see an oddly-behaving alien accompany Kirk and his crew on a mission to an unexplored world. Viewers soon learned that the eponymous Bem was a compound life form – his arms, legs, torso, and head could all separate and move independently.

Bem’s capacity for mischief and his cavalier attitude towards first contact situations frustrated Kirk immensely. Yet if this story was implemented in live-action it wouldn’t have had quite the same impact – the writer initially planned to portray Bem by putting two little people in a trenchcoat.

The modular Bem was but one of many unconventional aliens introduced in TAS. Kirk and company also ran across insect and plant-based intelligent life, to say nothing of a race of super-intelligent giant slugs that put Kirk, Spock, and Bones in a space zoo.

TAS explored the back-story and character motivations of Mr. Spock in-depth in the time-travel episode ‘Yesteryear.’ Venturing through the time gateway first shown in ‘The City on the Edge of Forever‘, Spock travels back 30 Vulcan years to help guide his troubled younger self through a crucial Vulcan rite of passage.

Young Spock learns to accept the inevitability of death when his pet, a large furry sehlat called I-Chaya, is mortally wounded. Looking more than a little like a sabre-toothed tiger, the sehlat’s design will be uncannily familiar to connoisseurs of 1980s-era Saturday morning cartoons. Filmation, the studio behind TAS, would go on to create the hit series He-Man and the Masters of the Universe. In all likelihood, I-Chaya served as the prototype for the cowardly Cringer, and his alter-ego, Battle Cat.

One of the key story-telling innovations of Star Trek: The Next Generation was the Holodeck, a chamber that makes deft use of hologram projectors and matter replication to effectively simulate any environment from history or fiction.

Yet this was another concept originally planned for TOS and implemented in TAS. In ‘The Practical Joker‘, we see Bones, Uhura, and Sulu take a break in the Rec Room, a huge, featureless white cube that can holographically simulate a variety of relaxing natural environments at the press of a button. Unfortunately, a malfunctioning computer decided that it would be most amusing to hurl our heroes into a blizzard, leading to Bones almost perishing from exposure.

Despite the hazards manifested by this form of entertainment, Holodecks have been a story-telling staple of Star Trek shows ever since.

One of the more light-hearted aspects of Star Trek lore is the perennial threat posed by the Tribbles – adorable balls of fur that breed at an incredible rate. The TAS episode ‘More Tribbles, More Troubles‘ depicts the return of the rogue entrepreneur Cyrano Jones, along with a new subspecies of genetically engineered Tribbles that are supposedly no longer prone to exponential reproduction.

Instead, this new breed grows rapidly to a colossal size. The mega-Tribbles soon take over the starship, and even boot Kirk out of his command chair! Naturally, the Enterprise crew prevails, leading to a wry remark from Scotty: “If we’re going to have Tribbles, it’s best if all our Tribbles are little ones!”

The TAS episode ‘The Slaver Weapon‘ was penned by Larry Niven, author of science fiction classic Ringworld, and one of the most influential sci-fi writers of the 1970s. One of Niven’s most memorable creations are the Kzinti, a warrior race of eight-foot-tall cat-men infamous for their belligerence, extreme misogyny, and taste for human flesh.

‘The Slaver Weapon’ saw a pack of Kzinti spies get their filthy paws on an artefact left behind by a long-extinct species – a ludicrously powerful matter-conversion weapon that threatened to tip the balance of power in the galaxy.

Yet for all their rapacious threats, the Kzinti’s on-screen presence was somewhat diminished by an unexpected production accident. Series director Hal Sutherland was colour-blind, and he didn’t notice that their uniforms and space ship were painted bright pink. When the episode aired associate producer D. C. Fontana was mortified, and she telephoned Niven to apologise.

There have been numerous references to the Kzinti in subsequent Trek properties, and they were going to make their live-action debut in Season 5 of Enterprise (2001-2005) had the show not ended with Season 4. They were also an obvious influence on the Kilrathi, the war-like space cats of Wing Commander. Interestingly, in Picard, Riker mentions at one point that he had to install a force field around his house due to Kzinti attacks. This throw-away line suggests that while a relatively minor threat for most of Trek history, the unstable political climate of the Picard era has emboldened the Kzinti, and that perhaps we’ll see them bare their claws in Picard Season 2.

But… Is it Canon?

After all these years there’s still some debate as to whether TAS is canon, and if so, just how ‘canon’ it is. This is unsurprising given the show’s obscurity – many casual Trek fans have never even heard of it.

Yet the evidence in favour of its authenticity is overwhelming. Veteran Trek writer D.C. Fontana oversaw all the TAS scripts, and Gene Roddenberry himself signed off on every story, often requesting multiple changes to make the cartoon conform to his vision of what Trek should be. Almost all of the original cast returned to deliver superb vocal performances (Walter Koenig was absent due to unfortunate budgetary constraints — he did get to write one of the scripts, though).

Due to the so-called ‘Mandela Effect’ the most iconic line in all of Trek – “Beam me up, Scotty” – is never actually spoken in TOS. The closest we get is Kirk saying “Beam us up, Scotty” in the TAS episode ‘The Infinite Vulcan.’ And while most Trek aficionados will know that Captain James T. Kirk’s middle name is Tiberius, this was never revealed in TOS! Again, it was TAS that gave us this crucial piece of world-building. And as for accolades, TAS actually won an Emmy – an honour that TOS was never bestowed.

Star Trek: The Animated Series consists of 22 half-hour episodes. First telecast across 1973 and 1974, it’s still eminently watchable today. Sci-fi fans who missed out on this strange and influential chapter in Trek history would do well to check it out.