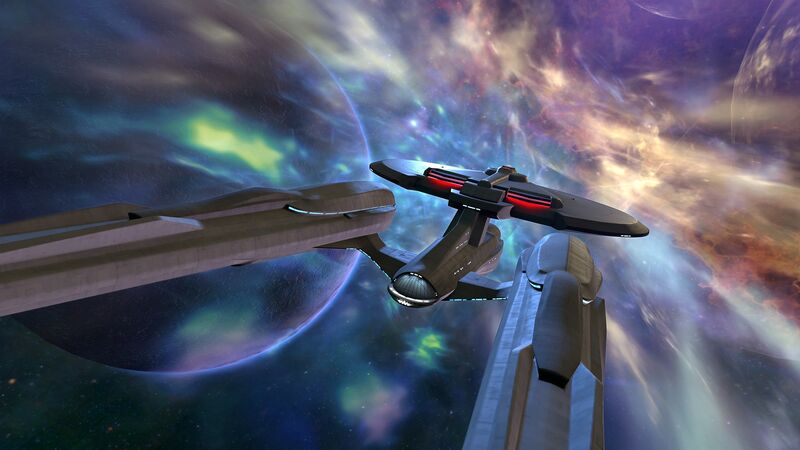 How ‘Star Trek: Bridge Crew’ Gets a Boost from Oculus Quest

Star Trek has always been about the ensemble. The most memorable line in the entire 53-year-old franchise (other than “Beam me up”) is “The needs of the many outweigh the needs of the few…or the one.” It’s a philosophy that has driven the success of the show from The Original Series to Discovery, and it’s what makes a multiplayer VR game like Star Trek: Bridge Crew feel like an essential part of that universe.

On Bridge Crew, you and three other players become Starfleet officers on the U.S.S. Aegis — a sleek, Kelvin timeline Federation starship, with additional retro missions (complete with Jolly Rancher toggle switches) on the TOS Enterprise. Bridge Crew was originally released for PC and PlayStation 4 in 2017. A follow up DLC, The Next Generation, was out a year later, which added the Enterprise-D, a new bridge station, and the ability to create Data and Lore-style android avatars in addition to humans and Vulcans. The Oculus Quest release of Star Trek: Bridge Crew brings all of the content from the 2017 original release, including the Star Trek: Next Generation DLC. This untethered experience of playing a multiplayer game immerses you even deeper into the bridge and increases the opportunity for close coordination.

Bridge Crew is a cooperative game, but it’s also asymmetrical to an even greater extent than typical RPG games where players fill separate roles like, tank, healer, and DPS. Every bridge station is a completely distinct job, and your control station looks and functions differently from the other players. The helm steers the ship, sets speed and course, and maneuvers during combat. The engineer manages the ship’s systems, increasing power where needed, and prepares the ship’s warp drive for faster-than-light travel. The engineer also makes repairs when the ship takes damage. At tactical, you control the ship’s scanners, target threats, and fire weapons. When you’re on the Enterprise-D, engineering is swapped out for ops (Data’s seat, next to the helm), who directs the rest of the ship’s crew to add buffs and debuffs.

Out of everyone, the captain is the only one whose display shows the mission objectives and hints from Starfleet about how to proceed, while they also see the status of all the ship’s systems. That gives everyone on the bridge something to do at all times, with something as simple as driving to a new star system involving everyone on the bridge. So you’ll experience first hand just what the crew of the various Enterprises were actually doing when they raised shields, switched from a phaser beam to a burst, or scanned for anomalies.

No one is working in isolation, however. Want to shoot at the Klingons? Tactical needs the helm to move within the proper range. Just how quickly the helm can turn and control the ship relies on how much power engineering is sending to that station. But the engineer is also making sure the weapons have enough energy to fire and that the shields have enough strength to keep everyone from blowing up from a Klingon disruptor blast. Those three stations also share the ability to operate the transporters (your avatars can’t leave the bridge, but you’ll need to beam people on board to complete certain missions) and the ability to hack into enemy ships’ computers to temporarily disable them — a function the captain’s chair doesn’t provide.

Meanwhile, only the captain gets the mission updates that say whether your objectives are to destroy the Klingons right away or if instead you need to try to sneak off undetected before they call in overwhelming reinforcements. The captain also sees the status of enemy ships, and controls the main viewscreen.

It’s easy enough to meet up with your fellow bridge officers online, but the ability to play VR games anywhere with Oculus Quest can give your crew the extra edge if you meet up in person. Bridge Crew allows cross-platform gaming, so you don’t even need an Oculus Quest headset for everyone. You can go over to visit a friend who has the game on their PS4, or have people bring their gaming laptops over to your place, since Bridge Crew can also be played using a gamepad or keyboard and mouse.

Meeting up will help with a challenging and underrated part of playing Bridge Crew: talking to each other. Even if you’re not trying to role-play, you’ll end up sounding like the crew of the Enterprise — or, for that matter, any real life military vessel. That’s because in order for your crew to coordinate their actions, you’ll need to respond to orders from the captain, report back when you’ve raised shields or engaged one-half impulse power, and concisely describe what you’re seeing from your position. It takes a little practice to get the hang of it, but the learning curve is fairly quick, especially if you’re playing with people you already know.

Everything plays out in real time on Bridge Crew, and a quiet sensor sweep can quickly ramp up into an intense firefight where you’ll have to make quick decisions while coordinating with the rest of your crew. It’s fast-paced and chaotic, especially when your control panels start exploding in typical Star Trek-fashion. But when you pull through at the end — especially if you beat Starfleet Academy’s infamous Kobayashi Maru scenario — you’ll feel like you’ve earned it.