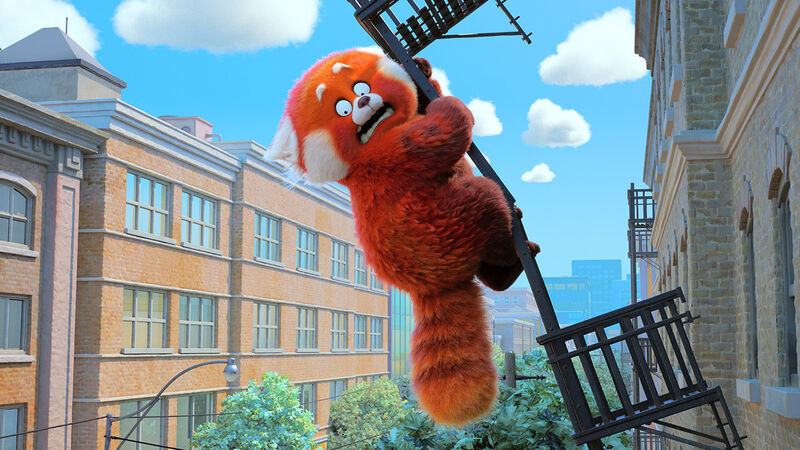 It’s pretty remarkable to be a young teenager and find yourself as the lead voice actor in a Pixar film but Rosalie Chiang’s path was especially notable. When she was just 12 years old, Chiang was hired to provide what is called the “scratch” voice for Mei Lee, the lead character in the film Turning Red – someone who could provide frequently updated recordings for Mei and her plight finding herself turning into a large red panda, in order to add some proper depth and help convey the emotion in the movie’s very rough, unfinished, and constantly evolving form. However, the idea was that eventually, the final actor would be found for the movie when it was released.

But the more Turning Red‘s director and co-writer, Domee Shi, and her collaborators at Pixar worked with Chiang, the more they began to feel there was no reason to find a different actress  – they already had the perfect Mei. So a couple of years into her time working on Turning Red, Chiang was told she was the one and only Mei, and now, at 16, four years after she began the project, she’s seen the film released to the public via Disney+.

With Turning Red now also available to rent or buy on Digital – and a 4K Ultra HD, Blu-ray and DVD coming on May 3 – Fandom spoke to Chiang about her experience making the movie and seeing firsthand just how much it changed along the way, what it’s like finally having the film out in the world, and her somewhat embarrassing experience recording what has become one of the film’s most quoted moments.

While Chiang was never promised she would be the actress voicing Mei in the finalized movie, she couldn’t help but hope it might happen, especially as her time working on Turning Red went on for so long. As she recalled, “I think at the time, I was just sort of daydreaming, ‘Oh, maybe I’ll book this… maybe I won’t.’ And I guess for two years, I was living in fear that I wasn’t going to book this, I was gonna get fired. But then my parents just sort of told me ‘Look, this is great!’ Say, hypothetically, I do not get this at the end. Just be grateful for this. Because it’s such a surreal opportunity to work for Pixar, whether I make it to the final cut or not. And to just do your best, because at the end of the day, that’s all I can do.”

There is an audio commentary on the new Turning Red release from Shi, producer Lindsey Collins, and director of photography Mahyar Abousaeedi in which they mention several discarded elements of the film – from small scenes to huge subplots or even rather dramatically different routes the story once took, something most major animated films go through, and which is typical of Pixar’s process. Chiang was there through so much of the film’s production, recording dialogue for these frequent changes, and noted, “I have gone through so many alternate realities of Turning Red, to the point where my parents had asked, ‘Oh, so what’s going on in the movie?’ and I said, ‘I don’t know!’ Because every so often, I’d be like, ‘Wait, is this plot point still happening?’ And Domee’s like, ‘Oh, no,’ and I’d say, ‘Oh, that changes everything.”

Ultimately, Chaing said the experience taught her a lot about how a film of this sort evolves. “It was realizing the really long, excruciating process Pixar goes through to really perfect their storylines. Turning Red, I think it took four years to make the movie, and that’s short for a Pixar movie! Being able to be very hands on in the project and understanding the entire process was a great opportunity.”

Here at Fandom, we immediately saw the impact of Turning Red, as the film’s page was the most popular page on the entire Disney wiki in the wake of its release on Disney+, with the page for Mei right on its heels, making her the most searched-for character for any Disney or Pixar property.

For Chiang, it’s a bit surreal that Mei is now a recognized and popular character. “It still hasn’t really hit me that the movie is released because of the fact that I’ve kept this a secret for four years and was playing Mei for so long, and understanding all aspects about her. The fact that people do love her character and embrace her is just… I guess it’s very assuring, because I’ve always thought, ‘Oh no, I didn’t do a good job. People aren’t going to like what I did.’”

Chiang recalled more of her own initial self-criticism, followed by some crucial feedback from her acclaimed co-star, Sandra Oh (who voices Mei’s mother, Ming). “The first time I watched the movie, I thought, ‘Oh my gosh, I totally botched it. I didn’t do well!’ But then by the time I watched it for, I think it was the fourth time, that was when I listened to my voice acting and I realized I did a good job. I feel like I’ve been very critical of myself throughout the years. I always told myself, ‘Oh, I’m very lucky and I should take every opportunity I get, especially this one, but…’ But then Sandra Oh, after the Los Angeles screening, she told me, ‘You know, you did a really good job,’ and it felt very organic and I believed what she said, and that was a true honor.”

Asked about the film’s humor, Chiang said there were many moments that stood out, though she noted that even beyond several deleted scenes included on the Digital and home release for the film, “There were a lot of scenes that were really funny but they had to cut it out because it didn’t fit the story and I do wish people could have seen that.”

But as to her personal standout comedic moment in the finished film, she said, “There’s so many. There’s the scene where she’s drawing Devon…. That’s my favorite.” Chiang noted most of the scenes involving Mei’s crush, the aforementioned convenience store clerk, Devon, made an impact, adding, “Then there’s the scene where she sees Devon and she catcalls him.”

That catcall in question, of course, is the “Awooga!” moment, where Mei, overcome by her panda side, sees Devon and lets out a noise that matches her feelings. Told that this was, in fact, the scene that was currently winning a recent poll on Fandom’s Disney Wiki for the funniest part of Turning Red, she laughed and indicated she was not surprised, noting a TikTok she made about this scene recently that had gone viral, with millions of views.

When it came to recording that scene, Chiang recalled, “I was 13 when I said it and that wasn’t the original line. The original line was ’I love you!’ or ‘I love you, Devon!’ or something like that. It was just a sentence. And then after I said the line a bunch of times, Domee was like, ‘So, we have this alternate line we want you to say just in case.’ And I looked at it and I knew what it meant, but I was kind of embarrassed to say it, so I was trying to stall. I’m like, ‘Okay, so what does that mean? Ah, okay… I see. All right. Let me just think about it.’ And then at the end, I just said the line three times. That’s pretty short for a whole line. But I said it and I thought alright, what’s done is done. I don’t have to worry about it again. It’s probably not gonna make the movie.”

Turning Red is still a new movie so there’s no telling yet if we will see more of Mei, but the story certainly seems ripe for it. After all, Mei’s panda alter ego is not a secret and who knows how she’ll continue to have to navigate her transformations with her teenage life – or even beyond her teenage life.

Chiang said she was eager to get to tell more stories with Mei, should the opportunity arise, and obviously, as we’ve seen with Toy Story and other Pixar creations, they’re not afraid to explore characters aging and growing through the years. Said Chaing, “We’re like ‘Sequel!’ or ‘TV show sequel!,’ or even a prequel or just whatever. I feel like the world that Domee has created and that Pixar has created is so vast and there’s so many opportunities and things for them to do. Maybe Mei goes to high school and then maybe goes to college and Mei gets a boyfriend and maybe gets married. Mei becomes a mother herself! As I’m growing up, I can just grow up with Mei.”

In the meantime, Chiang is enjoying seeing how Turning Red has inspired its viewers so much, remarking, “I’ve seen so much fan art and cosplays and I’m just really glad the public response has been so good. It’s had its ups and downs, but at the end of the day, just seeing people really enjoy this movie and embrace the movie and want to do more for this movie, it’s very satisfying to see that and see everyone’s hard work.”

Turning Red is now available on all major digital platforms and on 4K Ultra HD, Blu-ray and DVD on May 3.

Click below to see what Turning Red director Domee Shi and producer Lindsay Collins told Fandom about setting the film in 2002, including so much relatable cringe in the story, and the creation of 4*Town‘s songs.