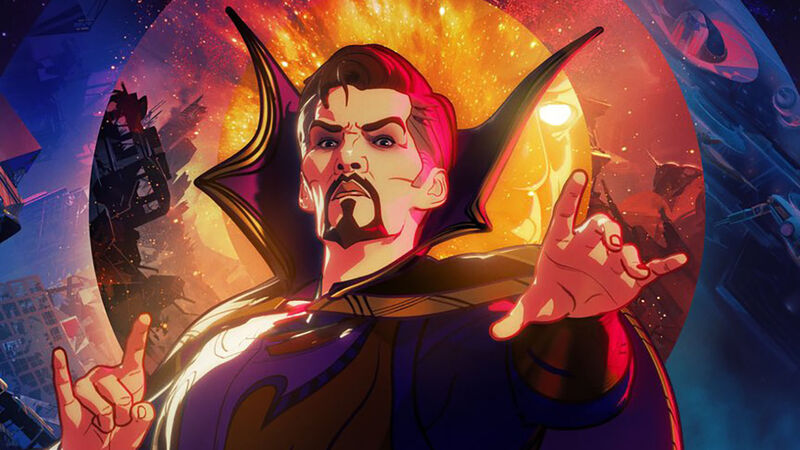 ‘What If…?’ Designers on Reimagining the MCU in Animation

The MCU has ventured into brand new territory with the recent debut of the Disney+ series What If…?, as the Marvel Cinematic Universe has gotten animated for the first time.

Like the Marvel comic book that inspired it, What if…? examines alternate realities that take familiar characters and send them down different paths, and the team assembled to create the series includes both Marvel Studios veterans and some brand new to this world.

I spoke to two key contributors to the series, Head of Visual Development and Character Design, Ryan Meinerding, and Production Designer Paul Lasaine, who represented both sides of the coin. Meinerding has been a part of crafting the MCU from the very beginning, working on 2008’s Iron Man and then a ton of MCU films since, while for Lasaine, this is his first Marvel Studios project – though he has worked on a beloved project with both Marvel characters and alternate realities before as a part of the crew behind Spider-Man: Into the Spider-Verse.

Having worked with the MCU characters for so long, Meinerding said, “The idea of translating them to an animated style was hugely compelling to me. I’ve been such a huge fan of animation throughout my entire life – and remember seeing a lot of Marvel heroes for the first time in animation when I was a kid. It was very inspiring to me to try and figure out the style and then to design within the style characters that I have lived with for upwards of 15 years, in some cases.”

Ultimately, What If…? Director Bryan Andrews found the main inspiration for the visual approach of the series in the work of artist J.C. Leyendecker, though that still left specifics to be solved. As Lasaine noted, What If…? is unique in that it’s branching off of pre-existing live-action films, so “We had existing locations, we knew we had a lot of sequences that were literally going to be the exact shots, shot by shot. But there’s no point in replicating it exactly, because what’s the point? So we knew we were starting with J.C. Leyendecker, we knew his level of stylization in his illustrations, so we kind of took that as a cue.”

Leyendecker mainly concentrated on people in his work and less on environments and Lasaine said starting out, as they began work on their environments, “Our first few paintings were very impressionistic and they looked like 1920s illustrations. And we realized pretty quickly that that wasn’t gonna look right… So we came up with this more graphic look, kept the Impressionism but hardened up all the shapes so if I call it graphic Impressionism.”

Lasaine admitted that while he had enjoyed the Marvel Studios films, he wasn’t what you’d call a hardcore fan when he was hired – though the fact that he had recently worked on Into the Spider-Verse for Sony certainly didn’t hurt as far as helping secure him the job.

However, he said he quickly became very familiar with the MCU films and in fact, “We had a TV in our offices that literally had the movies going 24 hours a day on a big constant loop. Anytime you’d walk in or walk by to go to the bathroom, you just watch a little bit of Doctor Strange, a little bit of Civil War, and it all just kind of went into your head.”

Lasaine and Meinerding both spoke about how it was important that brand new elements introduced on the show don’t feel disconnected from what’s come before, such as in  the latest episode of What If…?, “What If… Doctor Strange Lost His Heart Instead of His Hands,” which found an alternate reality version of Doctor Strange traveling to an ancient cave which held the lost books of Cagliostro.

In this case, the cave is a brand new setting which is used heavily in the story, but the visual template established in 2016’s Doctor Strange film was kept in mind while creating it. While this is not a Sanctum, Lasaine noted, “It is still part of [Strange’s] universe. So we definitely wanted it to be a place that would make sense. It’s another sorcerer’s environment. So it kind of kind of feels a little bit like that place you went to in the movie. It’s all part of that sorcerer lineage, architecturally.”

Asked what character redesigns were particularly exciting for him to work on, Meinerding replied, “I was very heavily involved in Captain America: The First Avenger, so going back into that world, and giving Peggy the Super Soldier Serum and trying to figure out a look for her to become a superhero was tremendously rewarding. Also, having the first Iron Man suit be developed by Howard Stark in that era with the Tesseract powering it with Steve inside and the star on the chest, which can be relevant to who Steve could have been, but also is based around the American military… All that stuff probably is the most compelling to me, just because it was stuff that I really lived and breathed back in what was that… 2009 we were working on that!”

Despite the many MCU projects Meinerding contributed to, one he missed out on was The Incredible Hulk, which made it notable when he was able to work within the timeframe and scenarios from that film with the “What If… The World Lost Its Mightiest Heroes?” episode, which saw the Bruce Banner of The Incredible Hulk reconceived from Edward Norton’s version to Mark Ruffalo’s, with Ruffalo voicing Bruce in that era for the first time.

Meinerding said he always loved working with the main Avengers character, but added that in this case, “The notion of Bruce Banner in that context was a lot of fun to figure out. Also trying to find the look for the Hulk in that episode was interesting, because we were essentially using the Hulk from The Avengers, but giving him the hair that came out of The Incredible Hulk.”

A very crowd pleasing element of the “What If… T’Challa Became a Star-Lord?” episode was the reveal that Thanos in this reality had been reformed from his genocidal ways by T’Challa and joined the Ravagers, and boasted a new, far more jovial persona as a result.

Meinerding laughed about the overhaul of a character he’d worked hard on to be something very, very different, recalling, “In those early talks with the Russo brothers and Kevin [Feige] about Thanos and Infinity War and Endgame, it was this notion of ‘He has to be the best bad guy that’s ever existed. He’s going to be the core of these movies, he has to really work.’ So making him into something that feels so so threatening and so powerful, and so dangerous to all of all of the Avengers, was a hugely fun experience.”

It was then an interesting challenge on What If…? to “Take him in the direction that felt completely different, because you can’t necessarily change the form of him. What can you do to change the tone? So changing his costume, giving him different expressions, making him lighter… And obviously so much of that comes in the writing in his interactions with the characters. But from a visual standpoint, we were trying to find things that were going to really make that switch fun when you actually realize what was going on.”

THE THING WITH THE TENTACLES

There’s been a lot of speculation about the large, tentacled creature Captain Carter fought at the end of the first episode of What If…? that was brought forth by the Red Skull – the so-called “true champion of HYDRA.” Was it a version of the being Hive as seen on Agents of S.H.I.E.L.D.? Was it the mighty Shuma-Gorath from Marvel comics? Or something else entirely?

When asked what that creature is, Meinerding said, “There’s no comic basis that I know of that we were looking at. I mean, essentially, Bryan is a huge fan of Cthulhu. Basically, it almost came out of how many tentacles can we get in an episode, more than anything, and I think that’s represented in the Doctor Strange episode as well. So I would look at it as more of a generic Cthulhu beast than anything [else].”

New episodes of What If…? debut Wednesdays on Disney+.