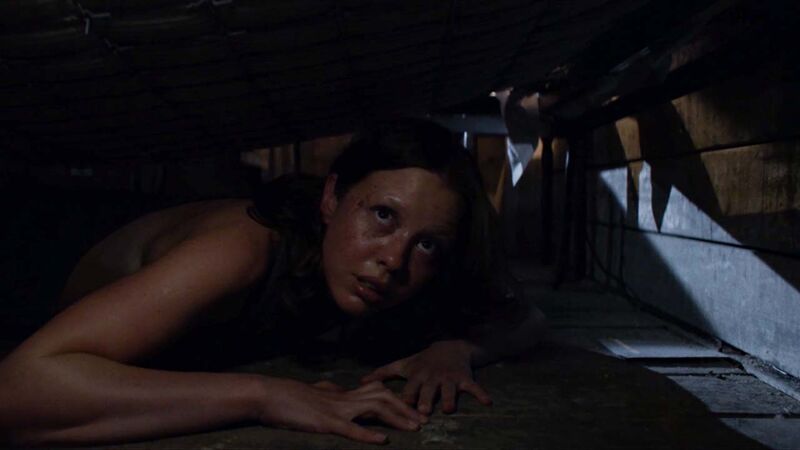 Having made a name for himself in the horror genre with films like The House of the Devil, The Innkeepers, and The Sacrament, Ti West returns as writer and director of X, which finds West and the ever-distinct studio A24 putting their stamp on slasher movies.

Fandom spoke to West and two of X’s stars, Mia Goth (Suspiria) and Brittany Snow (Pitch Perfect) – the film’s cast also includes Jenna Ortega (Scream), Scott “Kid Cudi” Mescudi (Bill & Ted Face the Music), and Owen Campbell (The Americans) – about how X reflects and expands upon one of the most notable tropes in slasher films, why setting the story in the 1970s was key, and how they used collective memories of The Texas Chain Saw Massacre as a springboard to go in their own direction.

A Different Take on
“Sex = Death” in Slashers

Any horror fan – Scream’s Randy Meeks included – will tell you that when it comes to the usual tropes of a slasher movies and who lives and who dies, sex = death. In these films, couples who sneak off for some quality alone time together are very often then targeted by the killer immediately after (or during, depending on which Friday the 13th or Halloween sequel you’re watching).

As West explained, when he set out to make X, “I wanted to take something that was traditionally speaking very lowbrow, like the exploitation genre or the slasher movie genre or the trope of sex and violence, and all these sort of things, and just try to do something a little more craft driven with it. Generally, those themes in movies are oftentimes salaciously there just to get people in the door. And I thought, well, what if I get you in the door with that, and then do something kind of unexpected with it?”

There are many ways to interpret what is occurring in X and why it’s happening, though West notes he doesn’t want to get too specific, explaining, “As far as the psychoanalysis, that’s gonna be different for every sort of person. For me, I just felt like there’s a common theme existentially in life that a lot of times, you’re not where you want to be. And you think, well, when I get somewhere else, everything’s gonna be okay. And I’ll do what I need to do to get there. And then you find out that when you get there, if you could only be back where you were before, everything would be fine and realize you’re never quite where you want to be. I just felt like that was an interesting place for a duality of stories in a horror movie. It built up a sense of quote-unquote ‘villains’ that, to me, felt like a fresh, relatable perspective.”

Snow, who plays the carefree, up for anything porn star Bobby-Lynne, admired how X was essentially able to have its cake and eat it too, saying, “It’s flipping the tropes on its head a little bit but also giving you everything that you’ve already loved about horror movies in one sexy package. You know you’re gonna see horror, you know you’re gonna see gore… It’s Ti West, so it’s going to be specific and tension building and well done. But with sex leading the plot, I think you’re already understanding that there’s going to be something different here. It’s not going to be just one girl having sex with somebody  and then she dies. The entire movie is driven by this entrepreneurial adventure that they’re on.”

West said he always knew he wanted to set X in the 1970s, noting, “I think it’s [because of] three reasons. One is that, in general, I’m interested in period pieces, because you go into a world seeing a movie, and when I watch people get on laptops and on their phones all day long, it makes me think too much about my regular life. I’m less swept away.”

With X specifically, West added, “From a narrative standpoint, the mid-70s is when VHS started and the late 70s where it started to get more popular before it boomed in the 80s. So from Wayne’s character perspective, if you were to try to be in the film business from the outside and didn’t need Hollywood, whether you were making exploitation horror movies or adult movies, there was this new wave of VHS coming that would create a business model. He’s at the forefront of that. And he’s seen this as an opportunity to get into movies. So it makes sense timewise then.”

Thirdly, West continued, “Because it’s so filmmaking and craft driven, why I wanted to make the movie is to sort of display that in this movie about making movies, the most rich time and most revered time in American cinema is probably the 1970s. And I think that’s because a lot of big released movies, large scale commercial hit movies, were made by auteur-ish directors. These movies were subversive and were countercultural or they were a little bit experimental in their filmmaking style. It was a decade where the reverence for the craft of cinema was really well accepted by the public.”

Goth – whose character Maxine is most intent on becoming a big star and believes the movie she’s making will be the springboard to that – said she felt X reflected the era its set, observing, “Films back then were often just operating on a much smaller scale. And as a result of that, you kind of got one of two movies, really. You got a very character driven story that was very focused and maybe just in one room and just focused entirely on character and whatever it is they might be going through. Or they were dealing with smaller budgets and they just had to sort of think outside the box and be more creative. The films really benefited from that.”

Describing why the 1970s was the right era for X, Snow brought up some other reasons tied to the story and characters. “There’s the obvious things like the clothes, the aesthetic, the music. But then underneath it all, there’s this element of revolution that just happened, specifically with women. There’s having autonomy and agency of your body and what you’re seeking and what you can do with your life. I think that’s really important for this and an interesting element of this. I think the 70s in general is like this exploration of free love and sex. So with it being juxtaposed to a horror film, it gives you both the sex and the gore at the same time and people just love to see that because it’s all of our favorite things in one!”

THE MASSACRE THAT STARTED IT ALL

A group of people driving a van through 1970s Texas who stop at a remote farmhouse with some ominous occupants is, of course, going to evoke The Texas Chainsaw Massacre, which West obviously was well aware of.

Regarding Tobe Hooper’s 1974 classic, West remarked, “I certainly love the movie. I think it’s at the very top of the slasher movie hierarchy of the greats. When I set the movie in Texas and put people in the van, there was no way around it. So when I looked at it, I was just like, okay, well, let’s embrace the fact that it’s a slasher movie and that there’s people in a van, and then you’ll think the movie is one thing and then it’s going to be something else. It actually worked to my advantage of you thinking it’s going to be something like that movie and it ends up being something different.”

West said you shouldn’t look for many specifics in terms of homages to Texas Chain Saw, with one exception. “There’s one shot of Wayne in the doorway that I think echoes Texas Chain Saw, but not really on purpose other than the fact that it’s just like our house was similar. But I was certainly aware of that when I was doing it and when I framed it up. I was like, ‘Okay, well this does echo it,’ but then I, no pun intended, kind of leave it at the door after that.”

Snow recalled that when it came to the cinematic inspirations for X, West didn’t tell her specific films to watch. “I asked for a list and he didn’t give me a list of films to watch, but we were really interested in creating a character that was inspired by if someone during that time was really intrigued by Dolly Parton. So I spent a lot of time watching Dolly Parton movies, which I was happy to do, and not necessarily horror films, because I think it was important for Bobby-Lynne specifically to not be living in a horror film. She had altruistic motives and was very happy with the whole situation [going in].”

Hearing her costar’s recollection, Goth replied, “I did get a list, which is funny. I don’t know why I got a list! But Texas Chain Saw Massacre was on that list and Halloween, Friday the 13th, Carrie… But, you know, that was more to get an understanding of Ti and what he comes from and what’s inspired him throughout his life more than anything. It’s not as though we then really ever discussed any of those movies at all. It was more just to get a better understanding. And it was helpful because I had heard a bunch of these movies, but I hadn’t actually gotten around to watching them. So it was cool to be talking to him at the same time telling me what to look out for, and I was able to appreciate them more, actually.”