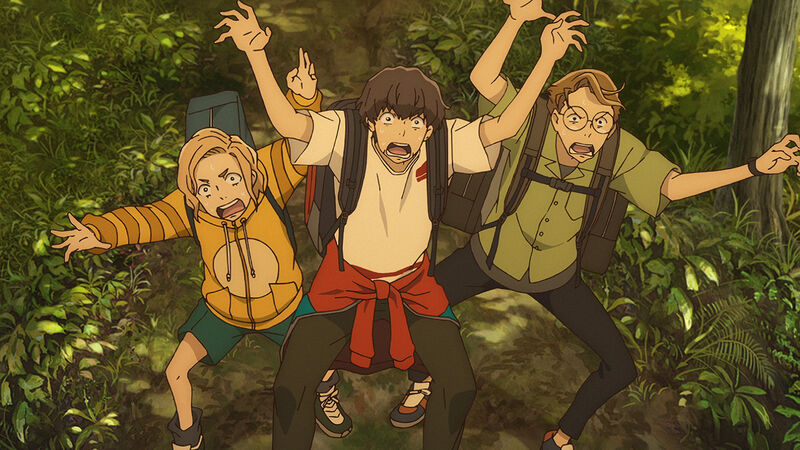 How new Anime Film ‘Goodbye, Don Glees!’ Is Influenced by ‘Stand By Me’

First, along came Summer Ghost – an acclaimed coming-of-age anime about three young soul-searching misfits by hot new directorial talent loundraw – and now comes Goodbye, Don Glees! You guessed it, an anime about three young outcasts trying to find their place in the world. Both are remarkable films interested in understanding the experience of and perspective on life from those at the beginning of it. It’s perhaps unsurprising then that death is also a feature of both.

Goodbye, Don Glees! comes from A Place Further Than the Universe director Atsuko Ishizuka. Both this film and Summer Ghost have tons of heart – we defy you not to cry when you watch them – and each features a journey that is at once physical and spiritual and which advances alongside the unfurling of a mystery that the three main protagonists must solve.

Also like Summer Ghost, Goodbye, Don Glees! is characterized by beautiful animation. It’s the perfect canvas for a moving story that blends the characteristic intensity and depth, and unique tone, of Japanese animation with the magic of enduring Hollywood classics Stand By Me and Ferris Bueller’s Day Off, two films that are also about a group of misfit friends who embark on a journey of discovery.

Although Stand By Me is more readily called a drama, and Ferris Bueller a comedy, they have flavours in common – both are bittersweet with a hint of ‘umami’. By which we mean they’re a mix of funny and melancholy; with an underlying solemnity that contributes to a balance, a roundedness, a complexity that touches us profoundly. This is something that’s common to both Summer Ghost and Goodbye, Don Glees! too. Ishizuka namechecks Stand By Me?specifically as an influence on her film.

“I revisited Stand By Me while I was filming,” says Ishizuka, who’s chatting to Fandom ahead of the US and UK release of her new film which was released in Japan earlier this year. “I had started making [Goodbye, Don Glees!] — it’s a ‘little big’ adventure for these boys [like in Stand By Me].”

“I watched [Stand By Me] then just realized that I wanted to make a story afterwards,’ continues the director. “So, the boys go on the adventure, they go back to their own small town, then [we explore] what’s next from their point of view.”

It’s this approach that is in part responsible for a dreamlike quality to the film — the ending feels almost imaginary, though Ishizuko says that she intended for the boys to physically complete their journey in the way that’s depicted. In other words, the events you see on screen actually happen. This dreamlike quality, however, helps to intensify and universalise the themes that the film probes.

Stand By Me isn’t the only film that influenced Goodbye, Don Glees! Ishizuka mentions a Japanese B-movie called Welcome to Zombieworld. Its actual translated title for the English-speaking world is Zombiology: Enjoy Yourself Tonight, though the German version is called Zombieworld: Welcome to the Ultimate Zombie Party if you’re interested in seeking it out.

“It’s ridiculous, but when I was researching about boys — boys are sillier than girls, right? – I looked at this film,” says Ishizuka. “They do that brilliantly in this film — these boys are funny-silly. They don’t care about the [wider] world. So that was a great influence.”

It’s because of the difference she perceives between boys and girls that Ishizuka decided to make the three members of the Don Glees – the club the three main protagonists form to embark on ‘backyard adventures’ (you’ll have to watch the film to find out what the name means) – young boys over girls.

The story concerns Roma, Toto, and Drop who are blamed one day for starting a nearby forest fire. Determined to prove their innocence, they set off on a journey into the woods to gather the evidence they need. But things don’t go smoothly, and as tensions simmer between the friends, they come to realise that growing up is about to take them on wildly different paths through life.

So, why exactly boys over girls?

“I wanted to depict how big the world is and also the potential especially when you’re that age. It really looks infinite,” begins Ishizuka. “And also it’s about me and the world. It’s about not [what’s] within you but about things happening outside you. So I thought boys might be more suitable to that kind of theme: my identity in the world, where I stand in this world, that kind of thing. If they were girls, that could [mean the film leaned] more towards human emotions, or relationships. I mean, it would be great — deeper, emotional. I’m sure boy characters can do the same thing. I’m not being sexist here. But when I thought about these things, boys would be more suitable.”

She’s clearly thinking about the perception that audiences, and society at large, have about girls versus boys as well as any considerations or prejudices she might herself have — unintentionally or otherwise — brought to either the characters on the page or to the plot, or even as a viewer. Certainly, there are emotions and relationships depicted in the film, but audiences perhaps receive and interpret them differently watching boys going through them on screen as opposed to seeing girl characters experiencing the same thing. It’s this that would have obstructed and obscured the story she wanted to tell, which she says is about the external over the internal.

“I don’t really remember the exact moment or instance but I wanted to do a boys’ coming of age story,” says Ishizuka when describing where her idea came from. “I was thinking, ‘Right, so what sort of experience could they have? Something that may change their life completely?’ and then I remembered what happened to my mother. My mum had a serious illness and she was told that she might not have long to live. I have a brother but I’m her only daughter and she wanted to leave everything that she had to me; to pass things on to me. And then that changed my life.”

In Goodbye, Don Glees! Drop encourages his friends to find their ‘treasure’ in life, whatever that might be.

“I realized that I’m important to someone — I’m very important to my mother,” continues Ishizuka. “I’m a little treasure, or big treasure, for my mother and that made me really think when I was working on this film, ‘Right, okay, these teenage boys — if they go through something similar to what I went through, what sort of experience can they have, what could change their life like that, or perspective on their life?’”

And she came up with the dramatic twist you see in the film that is the catalyst for change in all their lives. What is it that interests Ishizuka about the prominent theme of young people who don’t fit in and who are seeking their place in the world? It’s one she returns to in her work, and one that is threaded through much anime.

“Everybody has their own inferiority complex, but you can actually turn that into your confidence and that’s the start you have to [getting to] know yourself,” she says. “And I think because everybody has got that trait, everybody can relate to these characters.”

Goodbye, Don Glees! is a story about life, at the highest level, and so it’s cool that it’s a fire that’s the incident that sparks the trio’s journey, since, says Ishikuza, fire symbolises life. But there’s also a campfire sequence in the film that expands on this idea and which the director says is one of the pivotal moments.

“I think the campfire has got something special about it, but actually in my film it’s not just the flame but the smoke that plays a very important role,” she explains. “Flame, fire symbolises life but what smoke does here is especially [important] for Toto. Toto is just too proud to show emotions … he doesn’t show his weakness and wants to hide it. Smoke does that but also Drop is aware of how Toto is feeling so he creates more smoke so that everything’s easier. He’s just trying to make things easier for Toto, he doesn’t really want to reveal his own weakness and true feelings.”

And there it is: what we were saying about the emotions felt by the boy characters in this film. The film does indeed include and explore emotions, despite what Ishizuka says — and boys most certainly do feel, but they can often be seen to deal with emotions differently to girls, and there’s still a culture that exists around the world that says boys and men shouldn’t express emotions. Ishizuka admits that it was critical to dive into this here.

“It’s a really quiet scene in the middle of film … but it’s an important scene where I wanted to go deeper into each character’s emotions,” says Ishizuka who also states that it’s a key lead-in to the next important scene — which we won’t go into here, because spoilers.

Breaking the Boundaries with Music

Another of the standout aspects of the film is its soundtrack, which marks a departure from much modern anime. Peppered with indie-rock tracks with English lyrics, the film has a timelessness that marks it out from its contemporaries, and helps to deepen our reaction to and understanding of the themes explored.

“It is important with this film that I asked the composer not to sound like J-Pop,” says Ishizuka. “Although this story is about this small town, the story is about breaking the boundaries; the boys are going somewhere else. And also I wanted to show the world is connected. So, I wanted it to be sort of borderless. There are songs that have lyrics, but they try not to sound too Japanese. More are sung in English … I wanted to make it ‘wider’ and more universal so that people can relate to the characters.”

Goodbye, Don Lees! is surely a film we can all find something in to identify with, whether we find ourselves thinking nostalgically back to our youths or we’re going through a transition into adulthood right now. And whatever our gender, the themes are universal: insecurity in whatever form that takes, as well as questions over identity and our place in the world, and life’s propensity for throwing things at us are things we all experience.

This film might not be directly about emotions – as Ishizuka says, she wanted to explore how external factors change the direction of our lives – but it is also at the same time inescapably and fundamentally about our inner selves and how we feel about and respond to the events that shape us. Plus, it’s got a banging soundtrack and beautiful animation. What’s not to fall in love with?

You can catch?Goodbye Don Glees! in theaters via GKIDS on September 14, 18, and 20, 2022. In the UK, the film premieres at the Edinburgh International Film Festival on Tuesday, August 16, with a further screening on August 19. The film will be released widely in the UK later in the year.

Check out our interview with Summer Ghost director, loundraw, below!