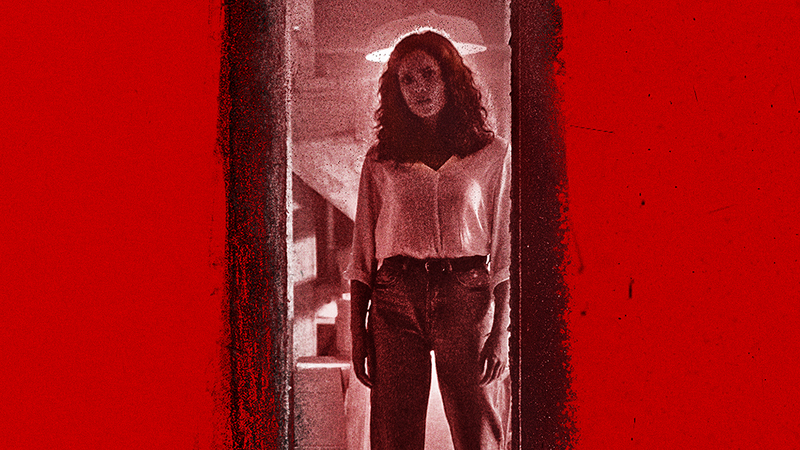 It is really difficult to discuss the plot of Barbarian without feeling like you’re verging into spoiler territory. As the trailer deftly teases, the film begins with Tess (Krypton‘s Georgina Campbell) arriving at the Airbnb she’s rented in Detroit for a job interview, only to find a man, Keith (It‘s?Bill Skarsg?rd), already staying there. Keith invites her in to sort out this screw up, and then… Well, something happens. Involving the house’s basement. And this is a horror movie, so yeah, it’s nothing good. Oh, also, Justin Long is in the movie, but even discussing anything about who he plays feels like it’s explaining too much of the plot and ruining the scary fun of discovering what exactly is going on here.

All of which is to say that Barbarian is a terrific, expertly made film that stands out as a 2022 horror highlight, but one it’s tricky to write a lead-in article for if you want to help maintain its surprises. But since I do want to maintain those surprises, read on for what the film’s writer and director, Zach Cregger, had to say about developing the story, its specific setting, and about becoming the latest comedian to make a straight up horror film… but without any plot details discussed beyond those very early scenes.

NOT WHAT YOU THINK

The “Oh no, we were both accidentally booked for the same Airbnb!” set up for Barbarian could certainly be used for a Hallmark type romantic comedy, but given it’s a horror movie, there are many valid reasons to want Tess to get the hell out of there and not trust a single thing Keith tells her from the moment her opens that door.

Without giving specifics, suffice to say, Barbarian has a big swerve in store for audiences in terms of what is occurring. But that wasn’t the case when Cregger first sat down to write it and the situation with Keith inviting Tess inside was going to go wrong for pretty much the first reason you might think.

As Cregger recalled, “I started writing the movie that you think you’re watching and that’s what I thought I was doing. And then at a certain point, I just kind of hit this moment of realization where I was like, ‘I know what’s coming, the audience probably knows what’s coming, time to time to do something else. Time to throw a wrench in this thing.’ So the big kind of defining twist of this movie came from me being frustrated with the script.”

Integral to Barbarian is its setting and that both Tess and the audience begin to learn the house’s layout, which meant it was important to clearly establish, for instance, which door leads to what room. Cregger said a great deal of planning went into the house, explaining, “There was a lot of blueprint design and fretting over the blueprints and making little changes and discussing and reverting. All those things really mattered because I wanted the audience to really feel like they knew the space. Everyone should know where the bathroom is in relation to the bedroom, and what’s in the basement and how these hallways go and which direction is what. That mattered to me. I had to try and keep it simple while still being kind of baffling. I don’t know if I pulled it off or not, but there was a lot of mental energy put into it.”

There are multiple scenes in Barbarian lit only by the light from a cell phone or a flashlight being held by a character in the film. Regarding that approach and making it both a realistic amount of light (or lack thereof), but also so the audience can see enough of what’s occurring, Cregger said he was very inspired by the 2017 horror film It Comes at Night, directed by Trey Edward Shults. Cregger praised, “The visual style [of It Comes at Night], which is very practically lit.”

He added, “That movie was not afraid to let darkness be darkness. And so in my conversations with Zach Kuperstein, my cinematographer, we talked about that movie a lot. We picked the Sony VENICE, which is a camera that works really wonderfully in low light. We could have scenes that were lit just by an iPhone and it’s going to look great. We went in prepared and planning on not doing any kind of big practical movie lighting and I’m glad that we did.”

During a Q&A following a recent screening of Barbarian, Cregger mentioned he’d shown the film early on to his friend, Jordan Peele. Peele of course has become a big name in horror filmmaking since his feature directorial debut, Get Out, despite first making his name in comedy. Similarly, Cregger is best known for his time in the comedy troupe The Whitest Kids U’ Know and their TV show of the same name, along with several other sitcom roles, but has now made his first feature film with the very different?Barbarian. It feels notable that not only does Cregger come from the comedy world, but so do many others who have recently become involved in creating horror films, including Peele, Danny McBride — as a writer and Executive Producer on the current trilogy of Halloween films — and Chris Rock, who not only starred in but developed the ninth Saw movie, Spiral.

Asked about he and so many others making this shift from comedy to horror, Cregger said, “I do think that the muscle you build up doing comedy is almost the same muscle you use to build a scare. You know, it’s about subverting expectation. It’s about rhythm. So I think that’s probably part of it. Jordan kicked the door open and I think people are much more inclined to view comedians as potential horror craftsman because of him and his success.”

Horror of course also operates with its own version of a punch line – whether it be a graphic kill or a big scare – and for both comedy and horror, Cregger noted, “It’s about zigging when they expect you to zag.”

Barbarian is a 20th Century Studios film, which means it’s being released by Disney. Studios have become notorious for sometimes putting rather major spoilers into trailers, and I asked Cregger if he was surprised that Barbarian’s trailer commendably held so much back.

Replied Cregger, “I was pleasantly surprised. I didn’t have to kick up a fuss. Disney made that trailer. They showed it to me and they didn’t want to spoil the movie any more than I did. And they crushed it! Look, I could have cut my own trailer and this movie wouldn’t have been as good, I truly mean that. So I’m lucky to have that trailer and I’m lucky to have them in my corner. I was thrilled.”