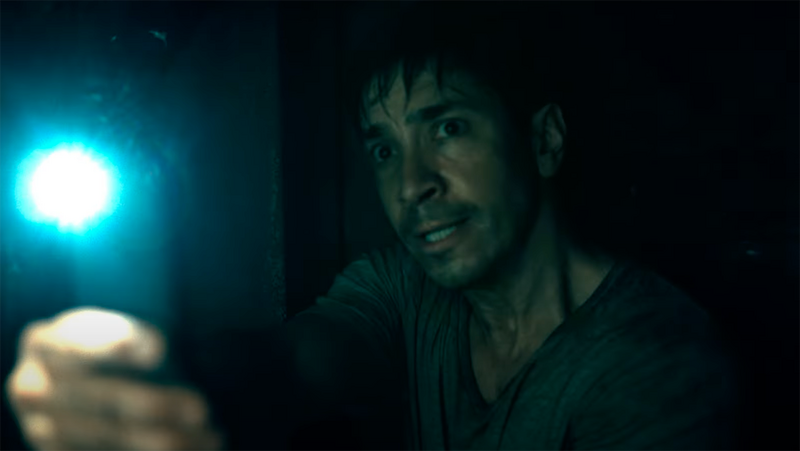 Dropping only 38.4% in its second weekend – a notably strong initial hold these days for a wide release film – new horror film?Barbarian is clearly benefiting from its well-earned positive reviews and enthusiastic word of mouth.

As I noted in my lead-in interview for the film with writer/director Zach Cregger, Barbarian is added to tremendously as an experience by not knowing too much about it going in, something the film’s trailer commendably helped preserve – holding back from showing too much about what occurs once Tess (Georgina Campbell) goes inside the Airbnb she rented that Keith (Bill Skarsg?rd) is already staying at, in what is an apparent double booking mishap.

With a couple of weekend’s worth of audiences now having had the chance to see Barbarian, read on for more of what Cregger told me as we dug into spoilers from the film and some of the big swings it takes.

Barbarian’s huge turn comes when Tess finds the screaming Keith in a bizarre hidden tunnel beneath the house, only for the horrifying presence of the naked and towering “Mother” (Matthew Patrick Davis under a lot of prosthetics) to suddenly attack and brutally kill Keith by smashing his head into a wall over and over in front of Tess, before we cut to black… and have the disorienting experience of the movie then switching to a bright Southern California beachside road, where Hollywood actor AJ (Justin Long) sings along to his car stereo, not knowing he’ll soon be encountering Mother himself.

It’s a wonderfully surprising double swerve – the shock and horror of what happens below the house in Detroit and then the “What is even happening here?” cut to the )momentarily) without a care AJ in LA.

As far as how he structured Barbarian and having AJ come in when he does and the way he does, Cregger said he never really thought about introducing him earlier or by using other scenarios, explaining, “There were no other avenues explored. I finished [writing] the first chapter and I thought it was over. I was like, ‘That’s it. It’s a short film. I’m never going to make it. No one’s ever going to read this. It’s done.’ But I just liked it. I just kept thinking about it.”

In the film, AJ, with his career in jeopardy in the wake of a rape accusation, travels to Detroit and a certain house he owns and has been renting out, where he is about to find out just exactly what is going on underneath it and encounter the imprisoned Tess in the process. As time went on and Cregger pondered the tale he’d written about Tess and Zach, Cregger decided, “I wanted to come back to that territory from the opposite angle. And then I thought the opposite of Georgina’s character is this AJ character. And so I built back.”

Regarding Tess and AJ, who will try to both survive long enough to escape together (until AJ attempts to sacrifice Tess to save himself that is), Cregger remarked, “I see them as kind of twins. You know, light and dark, yin and yang. And so, structurally, it just kind of came organically. I didn’t really question it.”

The film’s other surprise shift is a sequence that suddenly flashes back to the 1980s, as we realize we are seeing the house and its surrounding neighborhood in a very different condition from what it is in 2022, with the other homes nearby looking bright and in good shape, vs. how decayed they will become.

The focus of this flashback is the house’s 1980s owner, Frank, played by Richard Brake, whose previous roles include Joe “You Can Thank Me for Creating Batman” Chill in Batman Begins and The Night King in Season 4 and 5 of Game of Thrones. His run of nefarious characters continues here with the odious Frank, who we will come to realize is abducting women and bringing them into the hidden rooms amnd tunnels under the house for vile purposes.

What stands out in Barbarian vs. other films about such a man though is we never see the horrors done to these women actually depicted, even as we get enough information from what Tess and AJ discover in the present and via the sequence with Frank out in the world in the past to understand what he’s been doing. As Cregger explained, of this less is more approach, “I like the idea of horror movies being opaque and I liked the idea of not having every question answered and and I didn’t want to shoot a scene where a woman is abducted and tortured. I want that to be the background, but I don’t want to make that movie.”

Instead, Cregger explained, of the flashback sequence, “I wanted another moment of respite from the adrenaline. And I wanted to just kind of lay the groundwork and confuse us again, but bring us back to where we are,” as we will catch up with a now bedridden Frank soon enough via AJ stumbling upon him.

As it turns out, Keith was a complete innocent in all of this, having no knowledge of what was occurring underneath the house before his death, and Cregger admits to having some fun by casting Bill Skarsg?rd – best known as the nefarious Pennywise the Clown in the It films – in the role as a misdirect. “I think just the nature of his casting makes people pretty sure they figured the movie out and that’s a wonderful asset for us. So, yeah, I totally capitalized on his past success.”

Yes, you could say there’s an overt villain or monster of sorts in Barbarian, as the out of control, deformed Mother viciously kills both Zach (which we can feel bad for) and AJ (yeah, maybe not so bad about him). But ultimately, Mother is a sympathetic character who we learn is the result of Frank’s unforgivable crimes and their incestuous?results and her final moments with Tess actually are rather poignant – in a bloody, ghastly way, of course. With her wish to turn the people she encounters into her “baby,” Mother feels more like a tragic Frankenstein’s Monster type than something truly evil.

Barbarian has a lot to say about the way men behave towards women and regarding the more sympathetic way Mother comes off, Cregger said, “I don’t know if I consciously thought that or if that’s just what came subconsciously, but definitely she’s the right villain for this movie. She is a product of sexual misbehavior.”

On top of that, Cregger felt Mother offered another interesting mirror for AJ, who mainly is outwardly friendly and yet we know has committed his own sexual assault, one he can’t own up to. As Cregger put it, Mother “is this sort of creature that operates in a binary sort of fashion where she’s either smothering with love or she’s at maximum aggression. And those are the only ingredients available to the AJ character. It just felt like she was the product of the equation that I had been kind of playing with for the rest of the movie, so it just felt right.”

Regarding his next step, Cregger has said he doesn’t necessarily only want to make horror films now that he’s made his feature debut with one, but explained, “I’m writing two movies right now. One is a horror movie and it’s super weird. It’s weirder than Barbarian. I don’t know if I’ll pull it off, but I’m trying. And the other is a thriller that is also very strange. But, you know, I’m also reading scripts that other people are sending. And I’ve read some great comedies that I’m interested in and there’s a sci-fi right now that I’m thinking about tackling. So I don’t know what I’m gonna do. I really don’t.”

Barbarian played to excellent response at advance screenings, including those at San Diego Comic-Con and FrightFest, and has been a success since it opened. The movie gets some big reactions from crowds and Cregger described seeing those reactions firsthand as, “a blast. There’s screams, there’s laughter, people are nervous… I can’t describe to you how fulfilling that is. I’ve been working on this for years and, and right now I’m in that pocket where I get to experience it with an audience and soon that’s going to be over and I’ll never get to do it again. So I am relishing every time I get to go in and hear people react. It’s just a joy.”