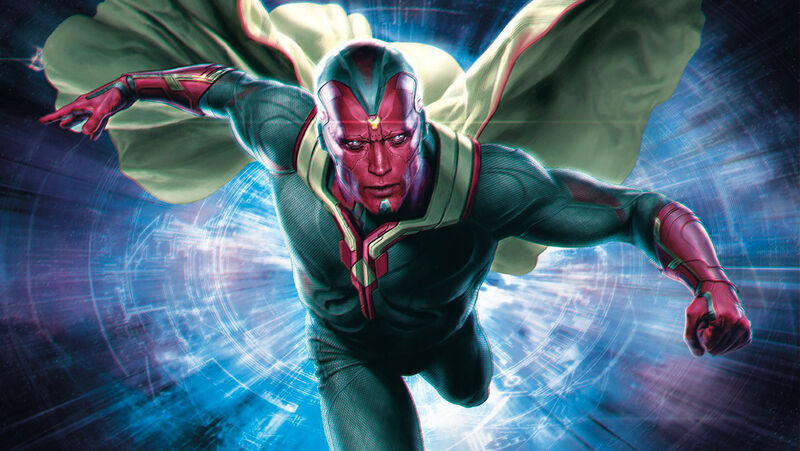 A Day in the Life of Vision

Ever since he was brought to life in spectacular form in Avengers: Age of Ultron way back in 2015, the Vision has been one of Marvel’s most colourful characters — both figuratively and literally. He’s a man of many talents, with more superpowers than you can shake a Mjolnir at, and he’s a complex fellow indeed — a tangled web of intelligent computer systems, killer robot DNA, and infinity stones. He also rocks the hell out of a cashmere sweater.

But how much do we really know about Vision? How do we really get under that fruit roll-up coloured skin of his? What’s his operating system? Forthcoming Disney+ series WandaVision promises to shine new light on the homelife of everyone’s favourite AI-powered android, but until then he remains a fascinating character of whom very little is known.

The only way we can really gain an insight into the brilliant mind of Vision is to walk a mile in his shoes. Or rather, fly a mile in his cape. Let’s imagine a typical day in the life of the only Avenger who’d rust if you left him out in the rain.

Though he’s a synthetic super-genius with a brain capable of assimilating an entire internet’s worth of information in mere seconds, the most difficult part of Vision’s day happens when he’s standing in front of his closet. What to wear? You see, Vision is capable of generating synthetic cells to add to his person, meaning he can choose to wear anything at all — or nothing.

Vision has three fashion options to choose from. Cue the wardrobe montage! When he’s feeling fancy, he can take on his full mortal form, passing for a handsome and fleshy human being, one that looks just like the actor Paul Bettany. During battle, however, Vision might opt for his standard red, green, and yellow android get-up, complete with cape (idea copyright Thor, 2015).

Sometimes, Vis just can’t decide who he wants to be that day, so he’ll keep his bright red robo-suntan but will put on smart casual clothes over the top. His attempt at assimilation is appreciated, but this does have the unfortunate effect of making him look like a catalogue model crossed with a beetroot.

ZOOM CALL WITH THE AVENGERS

Vision has been a part of many superhero team-ups over the years, but he always comes back to The Avengers, with whom he keeps in constant contact. If it’s Vision’s turn to man the New Avengers Facility, he’ll make sure to organise regular video call catch-ups with the rest of the gang — and because he’s half-computer, Vision has never, not once, started a conversation while still on mute.

He’s shared many an exciting adventure with all of his Avengers colleagues, but Vision is a smart guy and knows there are still some grudges being held against him. Captain America, for example, has never really forgiven him for pitching up against him during that whole Civil War thing, and is always the last to join the group chat. Rhodey still won’t look him in the eye after the ‘incident’. And even though he’s a hyper-intelligent AI creation, Vision still can’t quite put his finger on his father-son-former-butler relationship with Tony Stark — throw Bruce Banner on the call and you’ve got a weird unresolved My Two Dads situation. Maybe today is a ‘camera off’ day.

CONTRIBUTE TO A REASONED DEBATE

If it’s a quiet day, Vision likes to blow the cobwebs off the old synthetic grey matter by engaging in reasoned debate with anyone who’ll listen — because you can guarantee he’ll take any opportunity to open his big red gob and say something incredibly prophetic. The rest of the Avengers know better than to get him talking on issues like oversight or accountability — once you get him started on a monologue he’ll never stop. So, to prevent his brain cells from corrupting, he does what any good social justice warrior would do: he calls a radio phone-in in order to share his opinions with the world.

“Today’s phone-in is on the topic of morality, and the switchboards are lighting up. Let’s go to line three, who do we have?”

“I have no name. But some call me The Vision.”

“Great, and what did you want to talk about, Mr Vision?”

“Humans are odd. They think order and chaos are somehow opposites and… try to control what won’t be. But there is grace in their failings. I think you missed that.”

ENJOY DOWNTIME DURING HIS THIRD MANDATORY SYSTEM UPDATE OF THE WEEK

It doesn’t matter that he’s the most technologically advanced being on the face of the Earth, all androids cannot swerve their fate: yet another software update. Even though it’s been, like, two days since his last one. If Vision wants his high-tech system to be protected against all manner of Ultron-esque viruses, he needs to find the time to sit down, plug in and tune out.

Luckily, downtime is something Vision enjoys. He appreciates fine art — he’s not being pretentious, but he probably appreciates it on a higher level than you do — and he’s been known to lose himself in Van Gogh’s masterpiece The Mulberry Tree, which hangs on the wall of his room at the New Avengers Facility. He’s also fond of a game of chess if he can find someone willing to lose horribly yet again. That does tend to be one downside of being powered by a super-smart artificial intelligence: no one is ever really up for board games.

PLAN HIS NEXT TRIP ABROAD

Vision is a man of the world and he loves to travel — if we had the power of flight and supersonic speed and didn’t have to bother with the queues at security, then we’d probably love to travel too. Anyway, ever since his participation in that dust-up at Leipzig Airport, he’s been on every single airline’s ‘no-fly’ list. So, Vision may well use some of his days off to plan his next trip.

He was born in Seoul in South Korea, he’s seen the beautiful rolling hills of Wakanda, and he’s defeated killer robots in the inner cities of Eastern Europe. So which continent is next? If he swished off to Australia, he could catch some rays on the beach — if there were any holidaying Brits trying to suntan, he wouldn’t even be the reddest person there. Maybe Vision’s next trip should be to return to Edinburgh. He never did get to try that deep-fried kebab.

No one who has kids has ever truly had a day off, and Vision is no different. Okay, so maybe he is a little different. For starters, the two children he had with Wanda Maximoff were not conceived naturally, what with him being synthetic and all. Wanda used her hex powers to get up the duff with twin boys named Thomas and William, making Vision a superdad.

Tragically, Vision and Wanda suffered the fate that all parents fear: their children were discovered to be fragments of the demon Mephisto’s soul, and were ultimately absorbed back into the hellspawn’s physical being. We must have missed that chapter in the baby book. It’s fine though, there’s a happy ending to the story: Vision’s children were eventually reincarnated as two Young Avengers named Speed and Wiccan.

Vision regularly checks up on his boys to make sure they’ve not been recently approached by any odd-looking demons who look like they’ve mislaid some fragments of their soul. They may not look like your typical family, but they’re a family nonetheless.

Vision and Wanda Maximoff have been an item for years, but it’s been a rocky road to say the least. Finding out their kids were demon hellspawn did put a bit of strain on the WandaVision relationship for a while there, and although they worked it out in the end, it doesn’t hurt to keep an open dialogue and talk their issues through with a relationship counsellor.

Vision, ever the pragmatist, can’t bring himself to say a bad word about the woman he loves. Wanda, unfortunately, cannot say the same thing. One frequent issue that she brings up is that Vision is “never really there” — although, as the android points out again and again, as he’s able to alter his physical form at a molecular level by changing his density using the Mind Stone, that can quite often literally be true.

One day. One day, Vision will bring up the time Wanda buried him a thousand feet deep beneath the Avengers facility during an argument. ‘Scarlet Witch’, he calls her, behind her back.

If the day is winding down, Vis likes to broaden his horizons by trying new things. His latest hobby is cooking, but he finds it quite difficult, given that he has no real taste buds and he’s never eaten anything before. It’s still preferable to another one of Black Widow’s peanut butter and jelly sandwiches for dinner.

Vision’s one and only speciality is Paprikash, an Eastern European dish which he’s getting close to perfecting (although when his back is turned, Wanda uses her hex powers to add way more than his ‘pinch’ of paprika). Still, he’s proud that he’s lifting spirits by putting meals on the table, even if he continues to be mystified why Americans seem to measure their ingredients by the cup.

PONTIFICATE ON THE MEANING OF LIFE

There’s nothing Vision likes to do more at the end of a long day than have a long old think. A lengthy reflection on the nature of mortality. A good long ponder about humanity’s ebb and flow. A real chin-stroke about the nature of existence and the purpose of life. He might even have a little cry about it, thereby proving that, regardless of his complex carbon matter, he is still at least a little human.

“Maybe I am a monster,” he wonders aloud, to no one in particular. “I don’t think I’d know if I were one.” The rest of the Avengers went to bed hours ago. Vision takes a deep breath and sighs. He plays one last game of digital solitaire despite the fact he’s chronically unable to lose, then he phases into his synthetic jim-jams and hits the hay, the day’s digi-thoughts still bouncing around his big computer brain.