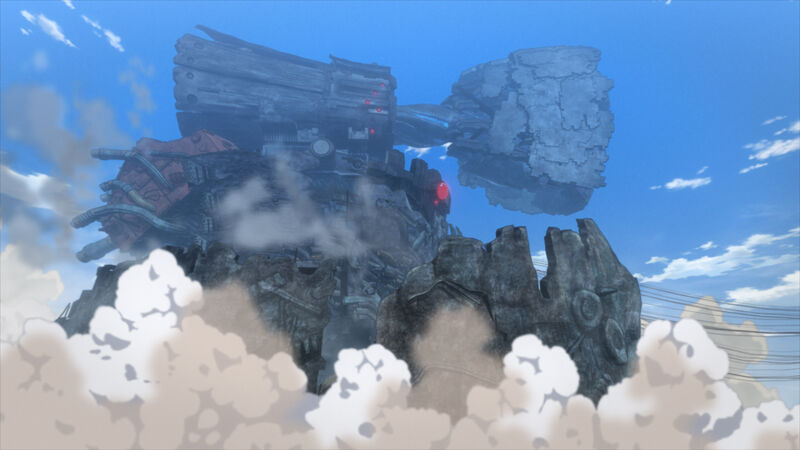 How the Real World Would Build the ‘DECA-DENCE’ Fortress

Picture it: the world’s under threat from terrifying kaiju beasts and we know next-to-nothing about their physiology or where they come from — how would we deal with the threat? Well, if the nuclear missiles don’t hold them all at bay, the human race is going to need a back-up plan. In the new series DECA-DENCE from the NUT studio, the obvious solution is to pool the last of the world’s resources into building a giant mobile fortress that is strong enough to withstand these attacks. Governments and borders are scrapped since the monsters, called the Gadoll, have wiped out the majority of the world’s population in their destructive reign of terror. So let’s look at how the real world would build the DECA-DENCE fortress, which stands at 3000 meters / 9842.6 feet tall, its weapons and the machinery operated by one of the factions living inside it.

Since the DECA-DENCE is essentially a giant tank capable of housing an entire population, it’s going to need some heavy-duty tank tracks and engines to keep it on the move. We know the Gadoll-battling-fortress is 3000 meters/9842.6 feet tall, but it’s not clear just how long it is — for the sake of this piece let’s keep it even and say our version will be 3000 meters/9842.6 feet long. That’s 1.864 miles. To put that into context, the men’s world record of running that distance is held by Daniel Komen of Kenya, who ran it in 1996 in 7 minutes 20.67 seconds. Wow.

Let’s use the Leopard 2A7 tank from Germany, one of the most powerful mobile weapons of war in the world as our basis; they’re 35.9 feet long. To make sure we had enough tanks to keep the DECA-DENCE moving, we’d need 84 Leopard 2A7s for the materials to build just the tracks. Obviously, in the world of the series, humanity is on its last legs – so money really is no object. But 84 Leopard 2A7s would roughly cost $840 million. (For that price, you could buy the Azzam superyacht for $600 million with some spare change left over!)

And since we’re going to need plenty of armor on the exterior of the fortress, let’s double the amount of tanks we’re going to need to cover that area – meaning we need 168 Leopard 2A7s. Ready for the price tag? It’s an eye-watering $1.68 billion. Although surprisingly, that wouldn’t even put you among the top ten richest people in the world. According to Forbes, Rob Walton (son of the Walmart founder) was worth $54.1 billion earlier this year. It’s a good thing the last remnants of humanity are building the DECA-DENCE fortress out of the goodness of their hearts, right?

At the end of the premiere episode of DECA-DENCE which debuted at FunimationCon 2020, fans finally got to see the fortress take on a horde of the Gadoll, and it utilized a truly gigantic cannon to try to take down one of the bigger monsters. But what’s the most powerful missile that we could equip our own fortress with? Well, that would be China’s terrifying Dongfeng-41 nuclear missile. It’s got a range of between 8,700 to 9,300 miles and experts say it could reach every corner of the world. The fourth-generation missile can reportedly carry between 6-10 warheads, although some say it would only actually carry three. It’s not clear how expensive it would be to buy or build, but since the country has the second-highest GDP in the world, standing at $14.4 trillion – we’re betting it wouldn’t come cheap. But if the United States’ B61-12 nuclear missile cost $10 billion, we’ll stick with that number. And considering we’re looking to wipe out hordes of the Gadoll, it would be worth it.

Although the fortress in the series is powered by the blood of the Gadoll monsters, we’ll use a nuclear reactor to power our version. And since our behemoth vehicle of mass destruction is going to need a lot of energy, we’ll obviously use the biggest nuclear power station in the world; Japan’s Kashiwazaki-Kariwa nuclear power plant. The facility has seven boiling water reactors with a gross capacity of 8, 212 megawatts, which is roughly 13 times the amount of power generated by a stereotypical coal power plant. It’s not clear exactly how much the power plant cost to build, but some reports estimate between $6 and $9 billion. Wow. Well, we do have a giant nuclear weapon to fire alongside housing the last of the world’s population!? Although just trying to picture the logistics of trying to build a city in and around a nuclear power plant as well as all the tanks and a giant nuclear missile sounds like a nightmare. But as a bonus, here’s how we’d fight off the Gadoll on a hand-to-hand basis!

The Gears faction in DECA-DENCE are the only ones using flight rigs to fend off the beasts, so it’s time to suit up and look at a jet-pack. No, we don’t mean the water-based ones which quickly dump the user back into the ocean or lake they’re near. We’re talking about Richard Browning’s design from Gravity Industries. It costs $340,000 and is an extremely delicate machine. Pilots have a jet engine attached to the back of their suit as well as two other engines strapped to each arm. Depending on how heavy the pilot is, flight-time is limited to around 10 minutes – meaning a fight against the Gadoll needs to be quick. Although in the footage we’ve seen so far, the Gears are whipping around the air so fast they’d probably end up hurting themselves if they wore Browning’s five-engine design! And aside from flying, they’d need some sort of weapon to even attack the monsters with, but since the pilot has two engines attached to each arm – it’s going to be difficult swinging a gun or a blade. Maybe let’s just leave that one to the giant nuclear missile?

If we were to add up all the costs of some of the most vital pieces in our fight against the Gadoll, it’s going to be a hefty bill. For our tanks, a nuclear missile, a nuclear reactor and just one flight suit, the resistance is looking at a price tag of $20,680,340,000. Or, twenty billion six hundred and eighty million, three hundred and forty thousand dollars. Ouch. The price we pay for survival, eh?