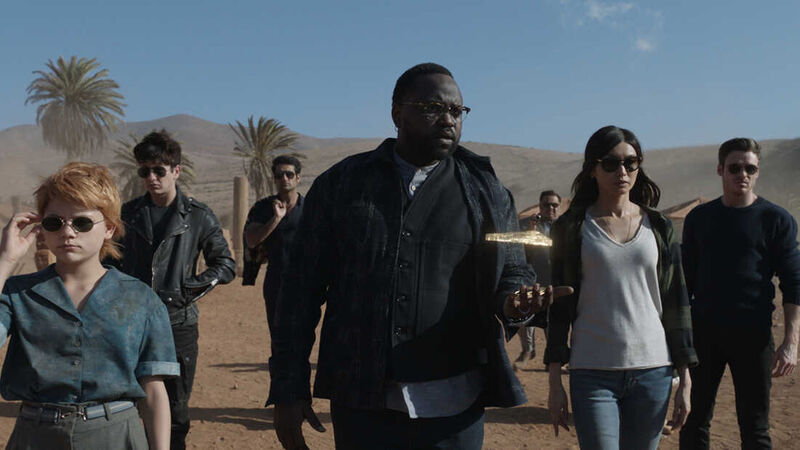 Eternals: Could a Real-Life Alien Invasion Be Like the Movies?

Be honest. When was the last time that anything genuinely surprised you? Reality TV star Donald Trump in the White House? Sure. A global pandemic that shut down all of planet Earth? Been there, done that. The current era is wild. If aliens landed tomorrow and said, ‘GZKWONK KZAAAAA! KAZZZZZA!” (that’s alien for “We’re running the show now puny earthling!”), would you really be surprised? Enter the Eternals.

The White House, the Ocean, or a Johannesburg Slum?

“How might it happen? Well, movies always show the spaceship landing on [or hovering over] the White House lawn,” he says. Like in 1956 classic alien invasion movie Earth vs the Flying Saucers or 1996 blockbuster Independence Day. “But I’ve always liked what happens in District 9, when the ship arrives over a Johannesburg slum. Chances are that aliens don’t think like humans – so why would they appear in America, just because it’s the centre of western civilisation?”

Good point. In The Thing, the creature – a parasitic extraterrestrial lifeform that certainly doesn’t think or behave like a human — winds up in the remote environs of Antarctica.

“It’s more likely they’d arrive in the ocean. If you’re coming from space, chances are you’d arrive over the ocean. It covers much more of Earth than land does.”

In District 9, and also Denis Villeneuve’s Arrival come to that — in which twelve alien spacecraft travel to different locations on Earth — the aliens aren’t hostile like Eternals’ Deviants, and those in Earth vs the Flying Saucers, and Independence Day. District 9’s ‘prawns’ are quickly contained in makeshift squalid internment camps and subjugated by humans, while Arrival’s visitors are initially feared and misjudged but shown to be not only friendly but also intent on the protection and betterment of humankind to foster a mutually beneficial relationship. Are these more likely scenarios, in reality, than a hostile or destructive visitation? Possibly, given the warmongering nature of humans. But McGrillen sticks to ‘facts’, which do undermine the Hollywood narrative.

“Some of the most credible UFO sightings in recent times are being captured at sea,” he says. “You’ve got the US navy reporting things they can’t explain all the time. And you’ve got to question what alien life might consider the dominant species on earth. What if alien life sees whales or dolphins as the species here they’d need to connect with? They’ve been here longer than we have. What if they look at our battleships or submarines as being what life is? What if they consider Earth’s greatest lifeforce to be water?”

“This is a very timely question right now,” he says. “The issue of disclosure is something that NASA has discussed in the last few days. This December, the James Webb Space Telescope is going directly into space. It’s really exciting! By cutting out all light from the sun and cloud cover, it’s going to be able to look into deep, deep, deep space. Potentially we’ll be able to spot exoplanets and different atmospheres, and we’ll see things with clarity that we’ve never seen before. And so if we did manage to spot another planet with a bit of hustle and bustle going on, we’d need to know how to coordinate contact. Would it be via the UN or another coalition of governments? These are big questions being asked right now.”

The central premise of Eternals is that alien life has always been among us – in fact, the new Marvel joint proposes that the very reason that humanity exists is because aliens bore us. This is a theory that will be familiar to anyone who’s ever stayed up too late bingeing episodes of Ancient Aliens.

“I subscribe to it, to a degree,” says McGrillen. “If you look throughout human history, our evolution and our development, you can see moments where it really does look like we’ve had a leg up. Very recently [former U.S. Army Counterintelligence Special Agent and former employee of the Office of the Under Secretary of Defence for Intelligence, now Godhead of the ufology movement] has alluded to a belief that around 70,000 years ago, human DNA took a little bit of turn. Is that someone or something helping us out? Giving our development a bump?”

The premise of Arrival (and even Eternals) doesn’t seem that far-fetched to McGrillen, then? In Arrival, the aliens, erm, arrive in order to teach us their language, which alters our linear perception of time to allow us to experience future events as ‘memories’. In helping us, the plan is for us to return the favour when they need our help in 3,000 years’ time.

“Think about an event like Roswell,” McGrillen continues. “There’s a belief that something crashed. But maybe it wasn’t a crash but a gift from another species. A few months after it happened [in 1947] you’ve got the emergence of fibre optics. A few years after that, IBM comes out with the first computer chips. That’s a huge leap forward in a small space of time. There are loads of people in the UFO community who don’t believe that extraterrestrial lifeforms are looking out for us – there are people who report terrible experiences being abducted for example – but it’s hard to look at humanity and not think that there have repeatedly been times where we’ve come close to destroying ourselves… and we haven’t. There are many, many reports of UFOs appearing close to nuclear facilities and those facilities just turning themselves off…”

Knocking the Ego Out of Our DNA

“I think it would be a great thing for us!” said Eternals writer/director Chloé Zhao when Fandom recently asked some of the film’s team what they thought the arrival of aliens might look like. “I think it would knock the ego out of our DNA. It would stop humans feeling like they’re the only ones that can give meaning to the cosmos. That’s a lot of responsibility for a species that lives, what, 100 years tops. If the aliens do come one day, I think it would be a relief, at least for me. Maybe it would unite us in ways we never thought we were capable of…”

Whether aliens arriving would be a thing of great terror or the realisation of humanity’s great potential remains to be seen. But few would say the idea was truly unlikely. Not in this world. Not in 2021. We’ll leave you with the cuddly if unsettling vision of Kit Harington, who plays museum employee Dane Whitman in the film: “I think there’d be a mass freakout! I don’t think we’d be cool about it! I think we’d be really uncool about it! If these little ‘Care Bears’ came down from space… we’d probably freak out a bit!”

One thing’s certain: if aliens do visit Earth and we find out about it, we can all agree on that freak out thing.

For more from our Eternals interviews, click on the story below!