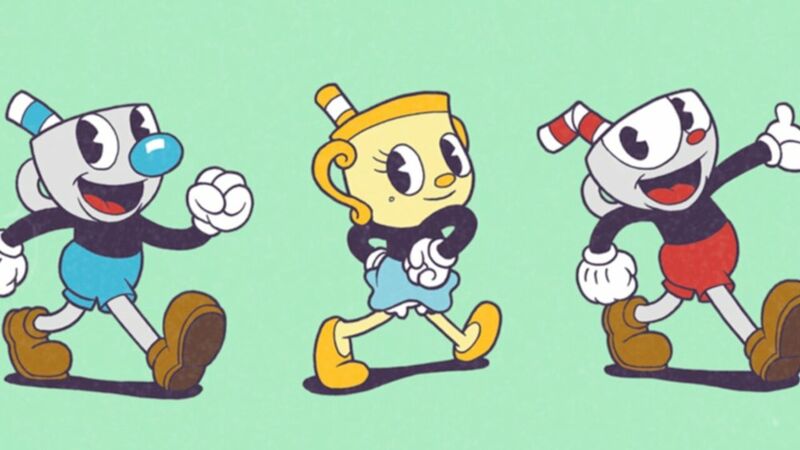 Have you ever wanted to play Elden Ring, but as a teacup on a quest to gather ingredients for a wonderful tart that can return a chalice ghost to her body? Well, my hyper-specific friend, we have great news for you. Cuphead: The Last Delicious Course (DLC) launched on June 30, bringing another twisted story to the Inkwell Isles.

In Cuphead, you’ll find the ghost of Ms. Chalice trapped in one of the Mausoleums; after freeing her, you’ll be able to travel to Inkwell Isle IV (where the DLC lives). Visit the bakery, try the Astral Cookie, and BAM! Ms. Chalice will become corporeal, and Mugman will become the ghost. However, the effects of the cookie are short-lived, and thus Cuphead and Mugman embark on a quest to collect ingredients for Chef Saltbaker to bake a Wondertart that would allow Ms. Chalice to return permanently.

Cuphead DLC adds six new boss fights (and a secret seventh one, but more on that later), a new mode called “The King’s Leap” which takes the place of Run ‘n Guns in the base game, three charms and weapons each, and, of course, one new playable character: Ms. Chalice. The challenges that await in the DLC aren’t for the faint of heart; the game’s difficulty is cranked way up. Fortunately, there’s still a way to get an S-tier game! Just follow these tips and tricks, and you’ll be playing Cuphead: The Delicious Last Course like it’s on EZ Mode.

Don’t let the old-timey look fool you; Delicious Last Course is a challenge. The boss fights are much more erratic than Cuphead, making it nearly impossible to track attack patterns and anticipate what’s coming next. The best way to make Cuphead DLC seem like a breeze? Be willing to put in the work, and don’t be afraid to die a few (hundred) times. Practice levels on repeat, and make sure to pay attention to each boss’s attacks. Though they won’t follow any particular pattern, they will have a tell that betrays their plans. When the Spider Mobster pulls out his telephone, you know he’s summoning six fly mobsters to teleport into the battlefield; when he presses a big red button, you know spiderweb bombs are incoming. You may only have a second between the tell and resulting challenges to prepare for the incoming attack, but hey—this is Cuphead! One second can be the difference between a KO and surviving to fight through another boss phase.

A lot of the Delicious Last Course bosses will try to distract and overwhelm you by attacking with multiple obstacles, be it projectiles, small (and easily eliminated) opponents, or explosives. It’s a clever trap; either you’ll be so focused on taking out Esther Winchester that the dynamite-dropping vulture will KO you, or you’ll be so crazed taking out the vulture, cactus, or snake oil boomerang that the no-good sheriff will go unscathed. Don’t let this strategy get you down; just keep dodging and shooting until it become second nature.

Also, don’t be afraid to try new things, whether that’s a new weapon or different approach to beating the level. Worst case scenario, you die and have to try again, best case scenario you find a method that works for you. Do this for every boss, and don’t be afraid to mix things up. You may find your beloved Roundabout, which does massive damage to the Howling Aces, doesn’t do much in the fight against Glumstone the Giant. Don’t let attachment to a weapon hold you back.

As with the base game, DLC boss fights give you the option to run the level on Simple mode, which decreases the difficulty of that particular fight. This is a good way to get some practice in and map out what each boss’s attacks are. However, it’s not worth the deaths to do it more than once or twice, as the decreased difficulty means the bosses have lower HP, the attacks are slightly different than on Normal mode, and the final boss phase is often cut out entirely. Additionally, while you will be graded on Simple runs, you cannot get the Wondertart ingredient unless you complete the fight on Normal (following the Soul Contract tradition in Cuphead’s base game).

One of the most important skills for you to master in Delicious Last Course (really, in all of Cuphead) is Parrying. Any enemy or obstacle that is pink can be parried; parrying successfully will boost your weapon’s Super Meter. It can be a hard skill to master, as messing it up can cost you a valuable HP. There are a couple things you can do to make parrying easier, like running towards the pink object before jumping, or equipping the Sugar or Whetstone charms, but the best way to nail the timing of a good parry is practicing. While there’s no specific practice arena on Inkwell Isle IV, the Mausoleums are just a short boat ride away.

You’ll also need to get really good at parrying if you want to achieve an S rating after completing a level. After knocking out the boss, a report card of sorts will pop up, assigning you a grade based on your performance. Cuphead requires at least three parries per level, or your score will be docked.

I simp, you simp, we all simp for Ms. Chalice

Almost immediately in Delicious Last Course, you’ll have the chance to get an Astral Cookie charm which, when equipped, lets you play as Ms. Chalice herself. If you’re on the fence about using the Astral Cookie over one of your other charms, let me say this: Ms. Chalice can double-jump, do an invincible roll, and dash parry. No joke. She’s OP even without weapons, regardless of the boss fight ahead. It’s much easier to parry by dashing at a pink item than trying to time a jump (though it may take some time to unlearn those Cuphead habits, if you’ve put much time into the base game). Double-jump is also a literally game-changer, especially for bosses that require a lot of movement between levels. Invincible Roll negates the need for the Smoke Bomb Charm. And once you start mastering combos between the three? Game over (because you beat it). Ms. Chalice is the GOAT.

Also—the Astral Cookie isn’t limited to Island IV, so if you have a less-than-perfect score or missed coin in any of the base game’s bosses or Run ‘n Guns, you should travel back and do it again, this time as Ms. Chalice. She may be the key you needed to platinum Cuphead.

Get in loser, we’re going shopping

After your nice Styxian boat ride to the Delicious Last Course island, hit up Porkrind’s Emporium. Our favorite merchant has all-new wares that will prove immensely helpful; since coins are scarce in Cuphead, here’s a breakdown on what he offers and what’s actually worth buying. New charms include the Astral Cookie, Heart Ring, and Broken Relic. All three of these are super helpful, but be sure to prioritize the Astral Cookie. It’s the only way to unlock Ms. Chalice as a playable character, and as we’ve already stated, that’s something you want to do. The Heart Ring is the first item that grants additional lives without nerfing weapon damage; when it’s equipped, you will gain an extra HP on your first, third, and sixth successful parries. If you choose to ignore our advice about playing as Ms. Chalice (hey, it’s your funeral), the Heart Ring can be a great way to make sure you live to see the end of a difficult boss fight.

The Broken Relic may be easy to overlook at first—it doesn’t have any known effects. However, it only costs a single coin, and opens up that secret seventh boss fight we mentioned earlier. Equip it, and you’ll be presented with the Graveyard puzzle; after solving that, you will be asked to take a nap. Nothing sinister… psych! Once you fall into a (not so) blissful slumber, you’ll find yourself in the Angel and Demon boss fight. It’s a completely optional fight, and, assuming you win, the Broken Relic will turn into the Cursed Relic. As you can (hopefully) infer, the Cursed Relic has a couple of nerfs; namely, you’ll be reduced to one HP and it will randomly change your weapon every time you shoot. However, if you successfully beat every boss in Delicious Last Course with the Cursed Relic equipped, it will transform one last time… into the Divine Relic. Your weapon will still randomize, but you’ll be back to full HP and it has the powers of the Smoke Bomb, Heart Ring, and Whetstone charms combined. Oh, and it charges your Super meter 5.2% every second. And unlocking the Divine Relic is the only way to unlock the Paladin achievement. It’s a tough road, but think of how EZ your Cuphead adventures would be if you had both Ms. Chalice and the Divine Relic.

The new weapons in Porkrind’s Emporium are the Crackshot, Converge, and Twist-Up. Of these, the Crackshot is your best investment. It has good damage, and the single shot will break into multiple (if slightly weaker) projectiles. Since the bosses in DLC do their best to overwhelm you with small foes, the Crackshot is a hugely effective tool in eliminating these distractions while allowing you to stay safe and keep focused on the main boss.

Don’t get your straws in a bunch; if you stick with this guide, you’ll be flying through Cuphead: The Delicious Last Course on EZ Mode. And never forget the most important tip of them all: keep an eye on your soul.