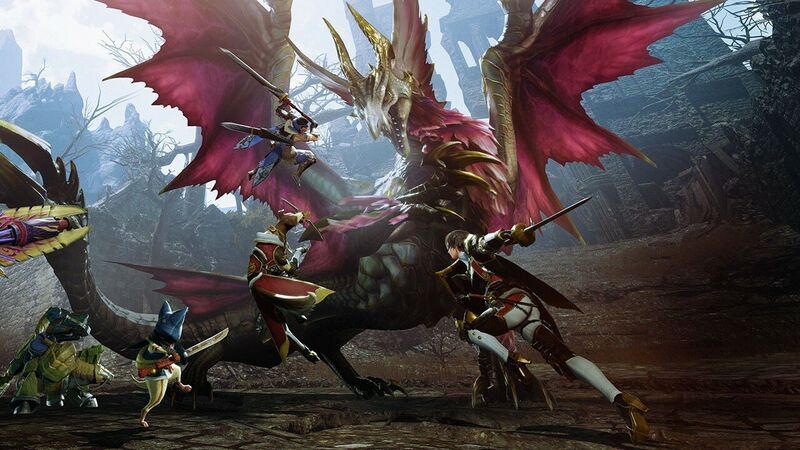 The latest update for Monster Hunter Rise, Monster Hunter Rise: Sunbreak, released in June 2022. Capcom’s action role-playing game thrusts players into the heart of a realm in turmoil—thought the Rampage has ended, new terrifying creatures have begun to attack Kamura village and its residents. After creating a character and selecting trusty Palamute and Palico buddies, you’ll be introduced to the Wyverian twins Hinoa and Minoto. They’ll be your point of contact throughout the game to get single and multiplayer contracts, respectively. You’ll also meet Fugen, the village leader who remembers the last Rampage 50 years ago, and Master Utsushi, who will train you and lead your in-game tutorials, getting you ready for your newest challenge: the far-off reaches of Elgado, currently under attack by the elder dragon Malzeno.

Learning the maps inside and out is hugely important for any Monster Hunter Rise playthrough. Each quest will send you to a biome, each with its own unique environment, layout, Endemic Life, and Monsters. When you first arrive, the map in the lower left corner of your screen will be shrouded, but as you explore, it will become permanently revealed, showing every pathway and elevation change you’ll need to know. Likewise, the location of all Large Monsters in the biome will be noted on the map with an icon—a question mark for yet-undiscovered species, and a specialized one for those you’ve already identified. Getting to know the map (and all its nooks, crannies, and shortcuts) can help you quickly reach monsters or deliverable items, which is especially helpful given each quest’s time limit.

For those familiar with the franchise, Monster Hunter Rise introduces a new movement mechanic: the Wirebug. It’s essentially a magical grapple hook that allows you to zip across land, as well as move vertically up hills and other structures. You’ll need to use the Wirebug to access hard-to-reach spots on the map, so it’s important to master it quickly. You can also use ZL + B for a quick escape from a monster on the rampage, or to recover from a tough blow. When aiming the Wirebug, if you’re not physically facing the direction you shoot, you’re going to have a bad time. If I had a Zenny for every time I thought I was about to zip up the side of the mountain, only to ungracefully shoot into midair… Just be sure to note that there are only two Wirebug charges, so time and aim your uses wisely, and be on the lookout for bonus Wirebugs flitting around the map. Also keep an eye out for Jewel lilies, which let you use Great Wirebugs and soar to unimaginable heights.

It’s also important to get to know your weapons—all of them. It can be really easy to find a weapon with timing and combos that suit your playstyle, then spend all your resources upgrading it alone. However, some weapons aren’t as effective against certain types of monster, so you’ll need to change it up. Fortunately, Kamura has a training ground that can let you test out every type of weapon and learn its pacing and damage rate.

Now for the meat of the game: slaying and capturing monsters for the villagers of Kamura. There are two categories of beasts in the game, denoted ever-so-cleverly as Large and Small. Small monsters are littered around each respective quest biome, usually in clusters of three, and can be taken out fairly quickly with a couple of blows. They’re a great way to get some extra Zennys and resources if you’re hurting, but honestly, unless you need to kill or capture them for a quest, they’re not always worth the effort. Large monsters, on the other hand, will take a lot more time and effort. It’s important to strategize a plan of attack before engaging in combat to ensure you have the most efficient tool to get the job done. (I’m sorry, but your beloved dual blades will be pretty much useless in the face of a flying wyvern.) Good thing you’ve practiced with your Bowgun!

Monsters in Monster Hunter Rise don’t have a health bar, so it can be hard to gauge how much of their HP is left in a fight. It’s important to study the monster’s movement so you can plan the most efficient strategy; attacking its head will usually land more damage, but leave you open to a plethora of attacks, while attacking the rear should  keep you relatively safe from retaliation, but won’t be as effective. However, some monsters also whip their tails around, or physically roll their bodies, leaving you open to damage in these otherwise safe areas. Larger beasts and boss fights will happen in three phases (more if you’re playing multiplayer); whenever the monster realizes it’s losing, it will sprint (or fly) away to try and regroup. As the fight goes on and it gets tired, it will start to become sluggish and more susceptible to attacks. If you keep attacking them in this state, they’ll become enraged and will relentlessly attack. When that happens, its attack pattern will change, throwing off your otherwise established fight rhythm.

In between fight phases, take a beat for some self-care. Monsters don’t regain health unless they return to their nests for a little nap, and since you know the map backwards and front, it won’t take you long to track it down again. Top off on health, take an antidote, apply some deodorant (seriously, that’s a craftable item in the game that negates certain debuffs, like the inability to use healing items). However, it’s most important to take advantage of this break in the action to use your whetstone to sharpen your weapon. Your gear needs maintenance, or else it will do less damage and be easier for monsters to block, which greatly increases the risk of fainting or failure. Using the whetstone (or consuming any item, really) during a fight leaves you vulnerable to attack, not to mention wastes precious seconds of combat.

Monster Hunter Rise has a variety of weapons, armor, and other useful items necessary for defeating monsters and completing quests. These are stored either in your Item Pouch or Item Box. The Item pouch is on your avatar at all times, and it has 24 item slots, four of which are reserved for your whetstone, BBQ spit, throwing kunai, and Great Wirebug. While it’s tempting to max out the number of different items in your pouch, a good rule of thumb is to whittle it down to the bare essentials: some health potions, rations for stamina, and whatever bombs, ammo, or coatings you need for your expedition. There’s nothing more annoying than needing to grab a health boost after a brutal attack, only to have to scroll through 23 items to find what you need. It also leaves you open to attack! To help expedite this process, you can organize your item pouch so everything is in your preferred order.

That’s it! Good thing, too—the Elder Dragons are on the horizon, and they look mad. It’s time to put your newfound knowledge to the test and end this Rampage once and for all, and now, you’ll be able to make it through Monster Hunter Rise on EZ Mode.