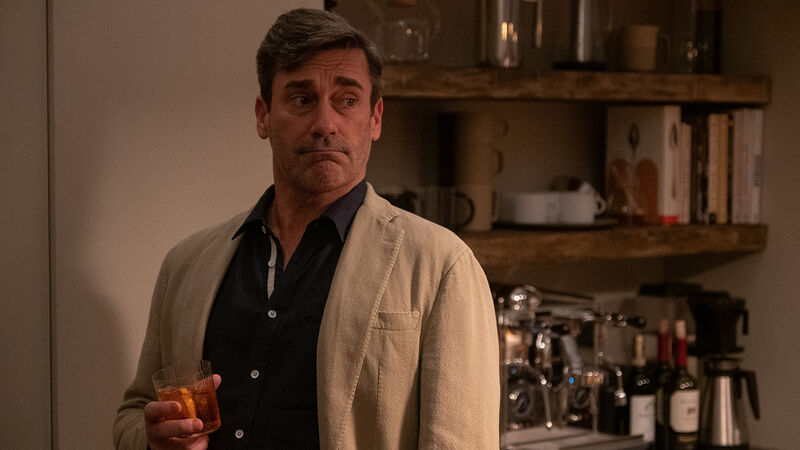 After more than 30 years, fast-talking investigative reporter Fletch (real name: Irwin M. Fletcher) is back with a new film, this time starring Jon Hamm in the title role. Back in 1985, Chevy Chase made Fletch a household name with a hit comedy based off Gregory McDonald’s award-winning first Fletch novel. Less successful was the sequel, Fletch Lives (not based on a McDonald book), released four years later, but ever since then there have been numerous efforts to bring the character back to the big screen.

Kevin Smith and Ted Lasso’s Bill Lawrence are a few of the notable names who attempted to make a reboot, with actors like Jason Lee, Ben Affleck, and Jason Sudeikis among the potential stars through the years. The idea always seemed to be to bring Fletch back but keep it more in line, and in tone, with the McDonald novels and now the quippy mystery solver is back in a big way with Confess, Fletch – based on the second Fletch book – from director Greg Mottola (Superbad, Adventureland).

Fandom spoke to Hamm and Mottola about the new film, which hits theaters (as well as digital and On Demand) on September 16 and finds Fletch in Boston searching for some stolen paintings at the behest of his Italian girlfriend (Once Upon a Time in Hollywood’s Lorenza Izzo), only to find himself framed for murder. So after all these years, how did a new Fletch movie finally get made? We asked Hamm about that, as well as the ingenious casting of Hamm’s fellow Mad Men alum, John Slattery as Fletch’s old newspaper boss, Frank.

The Boys are Back in Town

Those familiar with the Chevy Chase movies and/or the Fletch books are well aware of Fletch’s?insubordinate wise-cracking antics with his L.A. editor, Frank. So who better to play this role in Confess, Fletch than Roger Sterling himself, Don Draper’s verbal sparring partner, John Slattery? “I was very excited to ask him and I was even more excited that he wanted to do it,” Hamm said. “And I thought it was a very fun kind of wink and a nod. And it was very much a value-added casting choice; when you have people on screen that are meant to have years and years of history together and then you get to cast a couple of people that actually have years and years of history together. That lends richness and depth to the scene.”

Slattery’s Frank, now a news editor in Boston where Fletch finds himself embroiled in danger and intrigue, is both delighted and dismayed to hear from his old colleague, spending his days bitter about how the industry’s changed (and that he now has to work with millennials). “I love working with John,” Hamm continued. “I just made a film with him and Tina Fey [Maggie Moore(s)], that he directed, last November in Albuquerque, that hopefully will come out at Sundance or something. I love working with the guy. He’s a close friend of mine and I think he’s a tremendous talent, so I was happy that he said yes.”

Many in Hollywood are fans of Fletch (like the aforementioned Kevin Smith and Bill Lawrence) and that list included Hamm, who’d read the books after being a fan of the original movie. “I saw the original film when I was 14 years old, around about the same time I saw the original Top Gun,” Hamm said, noting the coincidence of that movie being the other big 1980s movie follow-up he’s in this year, Top Gun: Maverick. “I was just intrigued that ‘Oh, there was a book based on this.’ Because it was in my experience, with books that turned into movies, that they were kind of old, fusty books that you had to read for school or something. And this seemed like a book that I actually would just want to read, because it seems like a really fun story.”

“And so then I checked out the books.” Hamm added, “and I realized that there’s not just one book that this movie was based on, there is a whole series of books, which was another thing that blew my 14 year old mind; the idea that there’s a series of books that aren’t the Hardy Boys, or that aren’t books for kids, but that have the same character that keeps getting into new scrapes and adventures.”

Miramax owned the movie rights to Fletch and approached Hamm about starring in a new film. Hamm then knew the perfect director for the picture, having worked with Greg Mottola previously on Clear History and Keeping Up with the Joneses. “[Jon] loved the books,” Mottola explained. “And he saw some discrepancies between the character and the tone of the books and the original movie and it always stayed in his head, like, ‘I wonder if there’s another way to do this guy, but stay faithful to the spirit of the character?’ So Jon contacted me and said ‘Would that ever interest you?’”

“I hadn’t read the books,” Mottola shared, “so I grabbed a bunch and I read them and just loved them. And the one that Jon was leaning toward adapting was Confess, Fletch. And that just made the most sense to me because Fletch, the beginning of the story, is a former investigative reporter and he’s kind of drawn out of retirement to solve these two parallel mysteries. It was a dream of mine to make something in the vein of a comedic detective movie. Some of my favorite movies or detective films, whether it’s The Maltese Falcon or The Long Goodbye. But the comedic versions, like The Big Lebowski, one of the greatest comedies ever made, is essentially a Raymond Chandler story.”

“I just found not only the character incredibly compelling but also the adventures and the way that Gregory McDonald told the stories, and the sense of humor that he was able to impart into this character into this world,” Hamm said. “Through the ‘90s, in the early 2000s, everybody and their brother was attached to this project. But eventually, through the diligence of my team, and people that had my interests in mind, this thing came to me and I thought, well, the last thing anybody wants to see is some Chevy Chase impression. Let’s not do that. Let’s go back to the original tone and tenor of these books. And let’s see if we can re-imagine this. Let’s see if we can kind of do a cool cover song version of Fletch and see if it resonates. There’s a whole couple of generations of people that really have no connection to the original. So let’s give this thing a rebirth for a new generation, for the 21st century.”

For Hamm, who’s been dabbling in both comedy and drama ever since his Emmy-winning run on Mad Men, Fletch is the best of both worlds. Snarky as a factory setting, though dramatic when he needs to be, case-cracker Fletch isn’t always the smartest guy in the room.

Noted Hamm, “We didn’t want him to be somebody who’s just Hercule Poirot, right? He’s got everything sussed out, as soon as he walks in the room. We didn’t want that. There’s nothing wrong with that, but that’s a different story. We thought we could really mine the comedy out of the guy who thinks he’s got it right and doesn’t. But that’s okay, because he’s gonna come up with another thing that might also be right, but probably isn’t. But eventually, he’s gonna get there. And I think that that’s the fun part of our version of Fletch is that he’s not the smartest guy in the room, but he’s probably in the top three… if there’s four or five people in the room.”

Mottola is also well-versed in this style of breezy, conversational comedy and was able to have Hamm straddle that line. “Jon is great at playing charming and dry and can have a light touch, but yeah, he’s also played a lot of dark characters. Obviously, Don Draper comes to mind. And Fletch isn’t really dark. He’s kind of a happy-go-lucky guy. He kind of loves life. And he loves people. He doesn’t love all people, some people he thinks are real pricks. But the people he likes he really likes and he tries to help them. And I thought that side of Jon would be really fun to see.”

Hamm also notes that Fletch, while ever the sarcastic rascal, is also always fighting for the little guy and never punching down. “It was that combination of high-level sophistication and low-level poop jokes that’s really right in my sweet spot. “That’s what I really wanted to bring.”

Of course, fans of the 1985 movie will be interested in this new take too, but Mottola didn’t want to lean too much on nostalgia for Confess, Fletch. “There’s one joke that I did put in that we ended up having to cut,” he said, “and it’s when Fletch goes to the Yacht Club and there’s a party happening and a jazz band playing. We had them playing ‘Moon River,’ which was a real roundabout allusion to the first movie. Ultimately, it came down to ‘that’s a really expensive song.’ We only have so much money for music and so it got cut. But maybe it’ll be on a special edition someday. I mean, I love the original but the best thing to do was to try and forge our own path and, and give it its own identity.”

Forging a new path also extended to the Confess, Fletch’s score, which does not evoke Harold Faltermeyer’s (Beverly Hills Cop, Top Gun) original Fletch tune. “Harold Faltermeyer is an amazing composer and musician,” Hamm said, “but his sound is very much of an era, it’s very reminiscent of the ‘80s. And that’s awesome and cool and worthy and all of that stuff, but we really wanted to, especially from a music – music can be so compelling in so many ways, but it can really be distracting if it’s the wrong kind – and we really wanted to bring a more jazzy, sophisticated approach to this particular version of this.”

Confess, Fletch is in theaters and on Digital September 16.