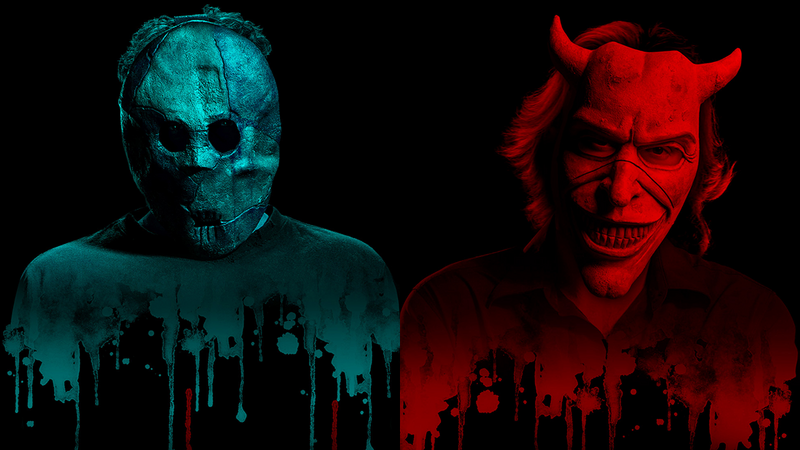 For many of us, it’s the most wonderful time of the year, as Halloween season is upon us, and with it, the return of many beloved annual Halloween events. One of the most prominent is, of course, Universal’s Halloween Horror Nights, which is back at both Universal Studios Hollywood and Universal Orlando Resort.

I took part in a press preview at Universal Hollywood for Halloween Horror Nights 2022, where Creative Director and Executive Producer John Murdy took us through two mazes as they neared the finish line. Read on below to find out what we saw in mazes inspired by recent Blumhouse films and another based on classic Universal Monsters – and how this year goes even bigger (and bloodier) in terms of special effects.

There have been other The Horrors of Blumhouse houses at HHN before, based on films from the prolific production company such as?Happy Death Day, The Purge, and Unfriended, but the new 2022 edition focuses on 2020’s Freaky and 2022’s The Black Phone.

In their previous incarnations, the Blumhouse houses had an entrance themed to look like a movie theater, but a change in location this year, moving it next to Universal Hollywood’s Waterworld show arena, necessitated something different due to a lack of height that would let them build a proper movie theater marquee. As Murdy explained, pointing above us, “We’re in the Waterworld queue, and there’s this big, huge overhead shade structure that is not so easy to take down. In fact, it is incredibly difficult to take down.”

Enter this year’s retro video store concept for the house’s exterior and entrance. Murdy said he’d noticed pop up video stores had become a bit of a trend of late, including the Los Angeles Slashback Video exhibit and a pop up video store Netflix did for the release of their Fear Street trilogy. For the Blumhouse HHN house, the idea is that this video store has mysteriously popped up in an old, run down strip mall (graffiti and debris were soon to be added at the time of our visit) with just two movies available inside… Freaky and The Black Phone.

With final props being finalized at the entrance, Murdy explained stacks of VHS videos for the two films would be on display, while an old TV set alternated between ads for both films. As he put it, the idea was, “What we’re creating is a portal to hell in the guise of a video store. So there’s going to be eerie red light and smoke emanating out of this and, of course, it’s a dark and stormy night. But you’ve arrived at this video store and lucky you, it’s open one night only, but as soon as you step through the doors, you’re transported into the world of the films.”

Walking through a Halloween Horror Nights maze, you’ll encounter fixed props, “scareactors,” and dummies, along with a healthy amount of special effects, but for 2022, Murdy noted, “We’re really trying to step up our special effects and we’re doing a lot more with special effects, which are all practical effects because of the world we live in.”

Though the live scareactors are invaluable, sometimes dummies are used simply because a particularly horrific moment can be made even more graphic, which is the case with the recreation of a victim in Freaky?who has a wine bottle shoved down his throat by that film’s killer, the Blissfield Butcher, shortly before the body switch shenanigans begin that power that horror comedy. Said Murdy of this particular kill, “It’s awful enough in the movie Freaky, but we want to make it a little bit more awful. So he’s an animated figure who’s twitching and you hear him gagging.”

Pointing to an easy to miss object low on the wall, Murdy added, “There’s a beam sensor right there and when you trip that, it causes him to puke all over you. You get showered with it.” (Don’t worry, guys, the puke is water! But in the dark, seeing those visuals, well, it can be a highly effective moment…)

Also making a huge impression is another of Freaky’s most memorable deaths, when shop teacher Mr. Bernardi is killed by his student, Millie (with the Butcher controlling her body) when she literally splits him in two with a spinning blade.

Murdy showed us the incredibly impressive Horror Nights version of this death and how he (and the eventual scareactor playing Millie) could push the dummy forward and we could see the head split open before our eyes. And while the blade itself wasn’t there yet, just seeing this replica of a human body split open over and over again in front of our eyes was certainly something and got big cheers from the passionate horror fans on the tour.

Murdy said this was certainly another example of how the team had stepped up the special effect this year, noting the HHN team were. “Working with our engineers that already work here as part of our Technical Services Department. These are the guys who fix the animatronic dinosaurs in Jurassic World. They came to us this year, of their own volition, and were like, ‘We’re big Horror Nights fans. We’d love to design some stuff for you.’ And they’re all like mechanical engineers. And I said, ‘Yes! Here’s one for you. I want to take a dude and have them sawed in half and have his body split open as they do it.” And they figured it out!”

THAT PHONE IS BLACK

As for the second half of The Horrors of Blumhouse, focused on the recent hit The Black Phone, it looks to be a cool and appropriately macabre distillation of the film, which Murdy noted is somewhat taking you in reverse order from the movie. In The Black Phone, after young Finney is kidnapped by the man the press have called the Grabber, he wakes up in a basement and only slowly do we see more of the house above he’s being kept at. The HHN house instead begins in the upper portion of the house — complete with the compiled evidence of the Grabber’s own brother looking for a kidnapper he doesn’t realize is under his roof — and into the kitchen, recreating one of the film’s scariest scenes.

Though not the first time it’s been needed for a specific scene to be recreated, Murdy noted they had to ask potential Scareactors if they’d be okay sitting shirtless in order to play the Grabber sitting in the chair, ominously waiting for Finney to come upstairs. Murdy demonstrated how the scareactor would play the character as asleep, as occurred in the film, before leaping out of his chair at a guest, helping send them through to the next room.

One key element of The Black Phone is that the Grabber has many different masks he wears throughout the film, which is reflected in the HHN house, where he’s seen with his various looks throughout. HHN houses often have one last surprise scare but The Black Phone house goes particularly big in this regard, as we were shown a hallway with various cut out sections that will allow for one Grabber after another – all in different masks – to leap towards those walking through.

For several years now, HHN has been doing houses featuring updated versions of the classic Universal Monsters but this year, as in 2021, they are taking them in a decidedly new direction via concepts that essentially chart films we never got.

Legends Collide is a concept also being done as a house at Halloween Horror Nights at Universal Orlando Resort this year. It’s typical for the houses at the two events to be quite different, even when based around the same film or concept, but Legends Collide will take that even further. As Murdy recalled, though the three central characters were settled on, the team at Universal Orlando really wanted to set the story in Egypt, while Murdy was pushing for England.

Ultimately, Murdy suggested they each do the setting they wanted “and we’ll just make it one big thing.” So while both houses can be enjoyed on their own, for the HHN die-hards who make it to both parks each year, know that Part 1 is considered the Universal Orlando version of the story, with the Egypt setting, while Part 2 is in England, via the Universal Hollywood version.

Being a part of Universal Studios has its advantages, including access to screen used props. Murdy recalled collaborating with Stephen Sommers on The Revenge of The Mummy attraction, based on the Brendan Fraser films Sommers directed. Sommers then gave Murdy and his team props from the films which otherwise would have been destroyed and which have sat in an offsite warehouse for all these years. Now, with the Legend Collide house, there was a great opportunity to make use of these props, with a number of notably large statues filling the house, all of which come from the films.

Those aren’t the only “made for a movie” objects you can spot though, as the Highgate Cemetery setting in one area included crosses created for another Sommers film, 2004’s Van Helsing, while yet another room – within the British Museum setting that makes up the conclusion of the house – has props that come from 2002’s The Mummy spinoff, The Scorpion King.

Murdy also noted they welcome the opportunity to be able to reuse items created for previous years, but it’s even better when it can serve as a crossover of sorts. Such is the case with Legends Collide, which at one point has Dracula’s Brides attack you – with the three figures having been used last year in The Bride of Frankenstein Lives, where that same trio were enemies of the Bride of Frankenstein.