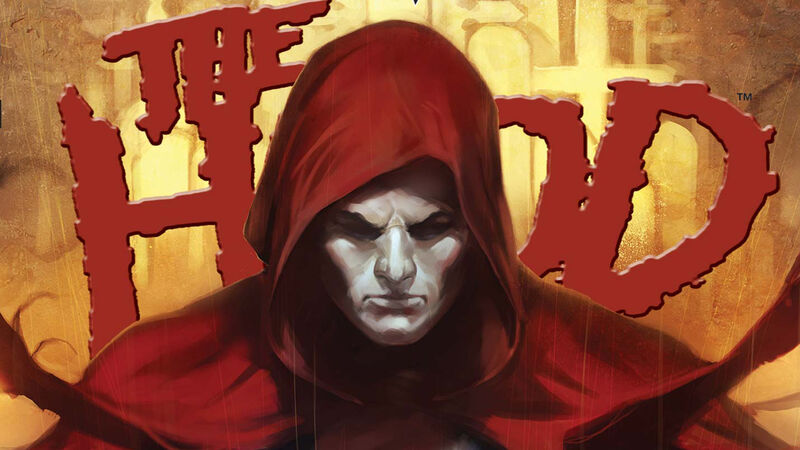 ‘Ironheart’s Villain, The Hood, Will Bring More Dark Magic to the MCU

Marvel Studios unleashed a torrent of information at this year’s D23 Expo convention and those in attendance got to see all sorts of footage and hear all manner of reveals, often right from the actors’ mouths. Among the surprises that day was the news that Marvel criminal The Hood will play a prominent role in the upcoming Ironheart series.

Attendees got a look at Dominique Thorne as young genius?Riri Williams, who sets out to make her own Iron Man-type armor, as?a sizzle reel from the currently filming series was shown. The footage also gave attendees a first look Anthony Ramos’ previously unidentified character, which included Ramos putting on a distinctive red hood. After the footage played, it was confirmed by Marvel head Kevin Feige, joined onstage by Ramos and Ironheart Executive Producer Ryan Coogler, that Ramos (Hamilton, In the Heights) is, in fact, playing Parker Robbins, AKA?The Hood, who will be the primary villain in the series.

This should make for an interesting conflict because, as Feige noted, The Hood is very much a magically inclined villain, while Riri/Ironheart — who fans will first meet in the Coogler-directed?Black Panther: Wakanda Forever —?is clearly a science-based hero.

Early MCU films often had heroes take on similarly-powered foes, but the next few phases of MCU films seem intent on exploring dichotomies between heroes and villains. We’ll see?Sam Wilson?use his extensive combat training and winged Captain America suit to take on the cerebral threat of?The Leader in Captain America: New World Order and in Ironheart, viewers will experience the classic magic against science battle that’s been a part of comics for decades, but not in the MCU so far.

“If you know the character from the comics, he deals in the dark arts, he deals in magic,” Marvel Studios head honcho Kevin Feige said at D23 Expo, when discussing The Hood’s role in Ironheart. “Riri is a technologist. We’ve had technological heroes and villains, we’ve had supernatural people deal with magic, but we’ve never had the two of them at the same time. So seeing Riri go up against [Parker] in a way that is very unique is what I think I’m most excited for.”

In the footage shown off to the crowd, Riri is hard at work on her new high tech armor. Meanwhile, her friend or acquaintance, Parker, lays out the idea that she might have to do some bad things to do good. Shortly after, it seems he discovers the iconic red cloak.

The criminal also known as Parker Robbins debuted back in 2002’s comic book The Hood. At first he was a small-time crook who pulled jobs to support his mother who needed extensive care. During an attempted robbery, he shot what turned out to be a demon, wearing a hooded cloak and boots. Not wanting to leave empty handed, he snatched those articles of clothing and made off. From there, he embraced the magical powers that came along with the garments. After a few minor attempts at going straight, he embraced his criminal nature and built his own super criminal crime ring.

“He was a misfit and he’s like ‘I want to take in other misfits and show the world that you looked at us as outcasts but we’re going to end on top,’” Ramos said at the presentation of the MCU incarnation of The Hood. “Parker, it’s a deep dive into a dark place he goes into, unfortunately. But I think on the inside Parker believes, truly, that he’s doing good and Parker has a love for his crew and a love for his people… He’s a complex guy and Parker kicks ass.”

Ramos’ comments seem to imply that the MCU version will take its cues from the Hood’s earlier appearances in the comics where he was played as a guy doing bad things for potentially good reasons. After going up against — and losing to — so many heroes, though, he has changed his tune and embraced his identity as a villain, noting on at least one occasion that he knows he’s not the hero of the story.

One of the reasons the source of the Hood’s, well, hood remains such a mystery is because you just can’t trust demons! Initially, the demon Parker took his hood from was known as Nisanti. Now, if that name sounds familiar to you, that’s because Brian K. Vaughn, who wrote the original Hood series, also wrote a comic called Doctor Strange: The Oath, which features a spell called the Sands of Nisanti. However, it might still ring a bell if you’re not a comic reader because the Sands of Nisanti made its way into Doctor Strange in the Multiverse of Madness?as the source of the ability to imprison?superpower beings at?Illuminati Headquarters.

On top of those Strange connections, at some point, the Hood began dealing with Dormammu of the Dark Dimension to dig even deeper into his powers. He later heard that Dormammu took credit for the whole thing, saying he had arranged for the cloak to make its way to that particular warehouse. The idea was that the more that the Hood did with his powers, the larger the foothold the dark one could gain. But, how much can you trust a demon?

This feels like the kind of detail that the Ironheart showrunners could latch onto. Dormammu?of course appeared in the first?Doctor Strange?film, where he found himself up against the human mage, who had come to bargain. Strange managed to use the Time Stone to show his opponent that he would never truly give up. Dormammu agreed to leave Earth alone. And yet, the mid-credit sequence of Multiverse of Madness, which found Dormammu’s niece Clea seeking out the Master of the Mystic Arts, might indicate that the evil god is not done wreaking havoc. Perhaps he will have a connection with the MCU’s Hood.

Leader of the Pack

In addition to the supernatural elements inherent to the Hood, the other major aspect of his villainous career revolves around his multiple attempts to organize his fellow criminals, with himself in charge. As the leader of what was simply known as the Hood’s gang, he explained that all jobs had to go through him and that they owed him a cut of any action. In return, he made sure that every member would have whatever back-up they needed and that if they got caught and didn’t talk about him, the Hood would free them.

The plan worked fairly well, even though Hood had to prove himself several times to be worthy of leadership. However, he made a fateful mistake to take on the secret Avengers. This was after the Super Hero Civil War divided the hero community over whether they wanted to register with the government — territory covered in Captain America: Civil War — resulted in an entire Avengers team on the run. The Hood’s gang actually came pretty close to taking out the squad one time, but they weren’t counting on Doctor Strange walloping them with some dark magic. While the MCU doesn’t have nearly the number of super-powered villains as its comic book counterpart, many of the existing ones — and scores of newbies — could find themselves working for Parker Robbins.

During a dark time in the Marvel Comic Universe, Norman Osborn managed to attain great power in the government after the Skrull Secret Invasion and used that for his own nefarious purposes. He even put together a group of villains who could share information and work together called the Cabal. As the person representing a large number of super villain criminals, the Hood found himself with a seat at a table that also included Dr. Doom, Emma Frost, Loki and Namor.

It’s probably way too early to even talk about this, but with the Hood’s inclusion in Ironheart — which is currently scheduled to come out after the Disney+ version of Secret Invasion — there might be a very good chance that the Hood will eventually be gunning for a spot on a potential MCU Cabal. However, with Vincent D’Onofrio’s Kingpin firmly in the MCU — and more appearances coming up in Echo and Daredevil: Born Again — it might be interesting to see how these characters play off of one another. It certainly wouldn’t be warm and cuddly…

In the comics, the Hood and Riri Williams have not been pitted against one another, at least so far. During his most prominent time as the leader of a supervillain gang, Robbins fought an Iron Man-less Secret Avengers team, and also encountered Norman Osborn during Osborn’s time as the armored Iron Patriot. Also, during his time with the Cabal, Parker drew the ire of Dr. Doom. Later, when Tony Stark was in a coma and Victor Von Doom’s face was no longer scarred, Doom decided to become a new version of Iron Man. He even got his own title, Infamous Iron Man which happened to run concurrently with Invincible Iron Man starring Riri Williams.

When the criminals found out about Doom’s change of heart, they were concerned that he would turn on them. The Hood rallied them to kill the new Iron Man, but Doom attacked them first. Eventually, Robbins and his crew caught up to Von Doom in Latveria and came very close to killing him. During a huge fight with AI-powered Iron Man armors and Doombots, Hood mixed it up with Victor once more and left him horribly scarred again, once more hiding his face behind the mask of Doom. It seems unlikely that the broad strokes of this story will play into the Ironheart show (even as we wait to meet Dr. Doom in the MCU), but a character like Parker Robbins would definitely be interested in getting his hands on Stark’s company with the head no longer in the land of the living.

So many of these developments may be in the offing over the next several years as more of the components come into the MCU or they may never come to pass. Either way, there are certainly many possibilities and it will be interesting to see how the Hood’s magical mayhem menaces the MCU.