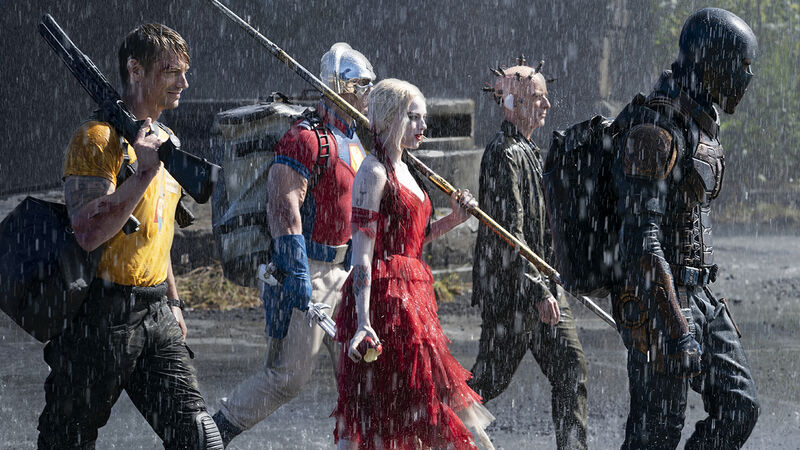 The Suicide Squad is nearly here and I attended an early screening of the film this week this week, followed by a virtual Q&A with writer/director James Gunn (Guardians of the Galaxy). While full reviews are still embargoed, as my tweet afterwards noted, I can say I was very happy with the film and how Gunn reinterprets these characters and scenario, following 2016’s?Suicide Squad.

Speaking to a group of press, Gunn discussed how the film lets viewers see the world from the perspective of its characters, how he chose which characters to use (and who among them would die), why Harley Quinn didn’t need the sort of overhaul some of the others did, and including Starro as one of the villains.

The Suicide Squad has some very creative and offbeat sequences that allow the audience to see the world through the eyes of characters like Polka-Dot Man and Harley Quinn and Gunn said these touches came about from a desire to not play things safe, explaining, “When I started this movie, I felt a great deal of responsibility. The amount of writers or directors who have been able to come and play in a sandbox like this, as big as it is, with these classic characters from a classic comic book company and being given full rein to do what I wanted to do… I wanted to take as many risks as I possibly could. I may not be able to do this in two years, but I can do it right now, and so I just wanted to do that. I wanted to make an all-out entertaining film from start to finish that didn’t play by the rules.”

Gunn remarked, “I think if movies are going to survive – because right now people go to the cinema for spectacle films and that’s about it. Maybe horror movies if the pandemic ever leaves us – but as long as that’s the case, for people to keep going to the movies, people have to be taking more risks in big, big movies than they do right now. And so I wanted to take those risks. And one of those was being able to take the risks with the sort of post-modern aesthetic of the film, whether it is Harley’s flowers or the way Polka-Dot Man sees people or the way we have our [onscreen] titles that segue from one sequence to another, those are all ways in which it is something that exists within a movie that is also very grounded at the same time. So being able to have that mix of stuff and that real post-modern feel to something was really important to me from the beginning.”

The Suicide Squad earns its R rating and then some, and is filled with some very attention-getting moments of mayhem, but asked if he ever had to pull back, Gunn replied, “I never held back and Warner Bros. never stopped me. I just really wanted to be true to be able to take risks in a large format like this and to be able to push things around.”

As fun as some of those more visceral moments are, Gunn said they often weren’t what he would define as pushing things, explaining, “To me, the things that people think of as sort of risky stuff sometimes are like a shark ripping a guy in half. But to me, that’s not risky. To me, it’s the backstory of Polka-Dot Man. To me, it’s going off on Harley’s private, personal adventure for 10 minutes in the middle of the movie when we’re in an action-adventure film. So it really is those types of things that were a little scarier for me to do that I hope people enjoy. But I didn’t hold back from any of it because I felt it was my responsibility not to.”

There are a ton of DC Comics characters in The Suicide Squad, and when it came to choosing who he’d include, Gunn explained, “I wanted it to be a really wide spectrum of types of characters from DC. To be able to have somebody who’s cool and angry, a dark character like Bloodsport, but then also somebody who is over the top and seemingly goofy we give soul to like Polka-Dot Man and then somebody who’s incredibly useless like Javelin, who’s going to a machine gun fight with a javelin, of all things, or an alien, with Mongal, and having all these different characters and see what happens to them.”

Gunn added, “It’s sort of organic. I’m just following the story. The story dictates everything for me and whatever the story needed in the moment, I didn’t balk. In a way it’s weird because I love these characters and in a way it’s weird because I am Amanda Waller. I’m pushing that button on those characters as we go through because it serves our purposes as an audience to see them go so that was an interesting experience. And a lot of fun! It was very freeing to be able to kill anyone I wanted to kill.”

Margot Robbie returns for her third film as Harley Quinn in The Suicide Squad, following the first Suicide Squad film and 2020’s Birds of Prey, a character Gunn said offered plenty of material to pull from when it came to how to depict her.

As Gunn put it, “A lot of these characters are pretty much blank slates. Weasel doesn’t have a lot of backstory or 300 issues of comic books to say who he is and I changed him completely. He’s basically a walking greyhound. Bloodsport, in the comics, he doesn’t have a great amount of story about his life and who he is. And so to me he’s almost William Munny from Unforgiven. So I’m recreating some of these characters for the movies.”

However, when it came to Harley, Gunn said, “To me, Paul Dini’s original take on Harley [in Batman: The Animated Series] is fantastic! She’s been an incredibly well-written character in the animated movies and the comics, so it was about to being true to who she innately is as a character. To me, she belongs on the wall besides Spider-Man, Superman, Wonder Woman, Captain America… She’s one of those characters that sings and has a personality. It was about being able to fully translate that to a motion picture. And also see her grow and make what are, for her, healthy choices. To a normal person, some of her choices may seem absolutely insane, but for her, they’re growth coming from a very, very, very toxic relationship and wanting to put an end to those types of thing for herself. It was about trying to give her the full life of the chaotic trickster on screen and letting her be every inch the Harley Quinn that the world deserves.”

The Suicide Squad includes a huge (in every sense of the word) villain in the form of Starro, the massive alien starfish that goes back decades in DC Comics lore.

Asked about how he came to include Starro in the film, Gunn replied, “I wanted a major DC villain that people wouldn’t expect to be in a movie and I’ve always loved Starro. As a kid, I found Starro completely terrifying.”

Gunn added that the small starfish Starro uses to take over others, by covering their face, also made an impact on his childhood self. “The idea of this giant starfish with one big eye that shoots these things out of him that take over people’s brains… Those pictures with Superman with one on his face, that always scared the s**t out of me! It was about taking something that was completely Kaiju ridiculous and putting him in a setting, the gritty streets, and then allowing him to do his business, but he’s also completely outrageous. That mix of things appealed to my aesthetic.”

The Suicide Squad is in theaters in the UK on July 30 and then on HBO Max and US theaters on August 5.