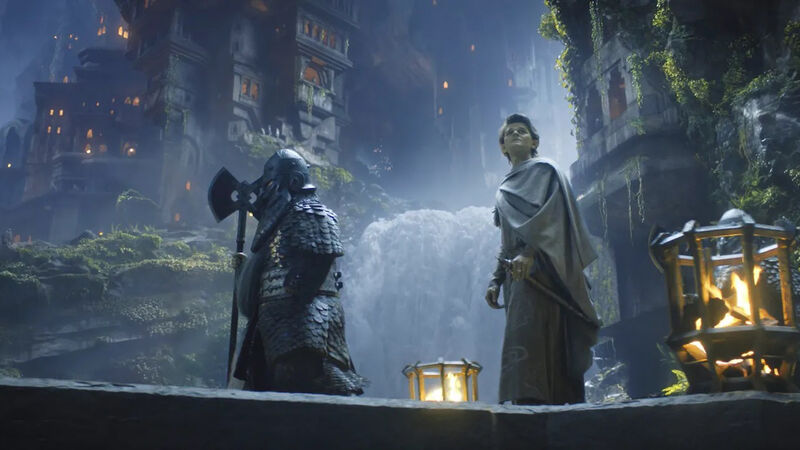 Could All the Races of Middle-earth Really Speak to One Another?

Language and linguistics were two of Professor Tolkien’s most ardent passions. In 1945, J.R.R. Tolkien became the Professor of English Language and Literature at Merton College in the University of Oxford, and one of the world’s leading authorities on linguistics and philology, or the study of language. So, it is no surprise that language plays a central role in Tolkien’s greatest literary achievement: The Lord of the Rings, and the creation of Middle-earth.

Tolkien created not just individual words, but functioning languages with their own rules of grammar and linguistic principles. The author applied that meticulous detail to the entirety of Middle-earth, which is why it’s still regarded today as a fantasy world of incomparable depth, standing as the single greatest influence on the development of modern fantasy. Today’s conceptions of evil orcs, graceful elves, hardy dwarves, and even walking, talking trees, stem from the lore that Tolkien helped to shape. One man, over the course of a few decades, created a mythology just as complex as those created by entire real-world civilizations. Albeit his was on the page; theirs, real life.

However, this depth, and richness, means that if you’re a fan of The Lord of the Rings (and let’s be honest, who isn’t?) you’ve probably wondered what it would be like to set foot in Middle-earth in real life. Maybe you’ve imagined wandering through the golden woodlands of the Elven city Caras Galadhon. Perhaps you’d prefer to explore the caverns beneath the Misty Mountains with the Dwarves. Or, maybe you’d be more at home enjoying the tranquility of the Shire, gorging on food and smoking pipe-weed, with some affable Hobbits.

In any of these cases, you (assuming that you’re a human) would be interacting with a non-human fantasy race. Humans and non-humans interact throughout Tolkien’s works, and while the different fantasy races do tend to keep themselves to themselves, it isn’t too uncommon to find a human mingling with Elves, Dwarves, or Hobbits, and having absolutely no issues with communication. Likewise, an Elf and a Dwarf interacting can also make themselves understood with apparent ease. Communication between species and races just isn’t a hurdle in Middle-earth.

But, in real life, would that really be as straightforward as it’s presented by Tolkien? Could a human really speak with an Orc, an Elf, a Dwarf, or a Hobbit? And, indeed, could they speak with one another? Despite their genetic links, mice and rats can’t communicate or understand one another – and even humans of different cultures and languages have a hard time too. Not only is speech vastly different around the world, but also writing systems differ as well as other forms of non-verbal communication.

We are both similar enough and intelligent enough, of course, to find ways to understand and also even learn one another’s languages. But would different species, albeit with a lot of similarities, stand any chance at all? To try and figure out what navigating the linguistic barriers of Middle-earth would really be like, we need a real-world expert — and a real-world comparison.

Dr. Penny Spikins is a professor of the archaeology of human origins at the University of York, and she took the time to shed some light on the factors that could have impacted communication between different human species.

“The past 20,000 years is the only time in the history of humanity where there’s only one human species around. There’s just this tiny period of 20,000 years where we’re the only species – and everything before is about lots of different species. It’s weird that we’re the only ones!”

Could these different human species, that existed with us for such a long period of time, be a suitable comparison to the races of Middle-earth?

Comparing Human Species to the Races of Middle-earth

During the periods when there were various human species, says Dr. Spikins, the different human species had lots of different shapes and sizes: “Homo sapiens [that’s us!] were the tall, gracile species, and you’ve also got very short, diminutive species like Homo Naledi and Homo Floresiensis. And then you’ve got more stocky, robust, slightly shorter, species like the Denisovans and the Neanderthals.

“So, one way to think of it is there were lots of different species of human but really there are three main types: the taller, gracile ones; then very robust species that aren’t quite as tall as modern humans; and then these other, really quite small, hominins.”

Anyone with even a passing knowledge of Tolkien’s work will immediately be able to see the comparisons between these categories, and the races of Middle-earth. Hobbits neatly fit into the smaller, slighter category of human species; Dwarves can be compared to the stockier and shorter (but not too short) middle group; while Elves complete the set as the taller race with the slimmer build.

Interacting with a Neanderthal

So, we know that there were many types of human species coexisting for a long period of time, and we know that they could broadly be physically compared to the races of Middle-earth. If we’re using this as the comparison between Middle-earth and reality, do we know if this plethora of human species were able to communicate with one another? Did they even interact? The answer, to the second question at least, is straightforward.

“We think there’s around 10,000 years where humans and Neanderthals occupy similar spaces, so around 10,000 years of overlap where modern humans and Neanderthals could have interacted,” says Spikins. “The best evidence for those interactions is the fact that we know they mated. We know there was interbreeding between the two species, because modern European and Asian populations have around 2-6% of prehistoric-human DNA, and we’ve even found evidence of hybrids between Neanderthals and humans.”

So, yes, the various species of humans would have interacted, and there’s specific evidence for the interactions between humans and Neanderthals.

The Challenges of Speaking to Another Species?

However, knowing these interactions happened is all well and good, but what about communication? Were Neanderthals and Homo sapiens actually speaking with one another? Or are there other ways that the two species, and therefore the species of Middle-earth, could feasibly be communicating? This one’s a bit more complicated, so get your thinking cap at the ready.

“The level of interaction suggests that humans and Neanderthals were communicating, and Neanderthals certainly had the physical ability to make language. In terms of their activities: planning, moving around the landscape, doing things ahead of time, meeting in specific places, coordinating burials – that would be hard to do without language. So, Neanderthal communication would have been just as complex as human communication, but we can’t be sure it was all vocal. There might have been more gestural communication among Neanderthals than we see with modern humans, because there has been the suggestion that they used their teeth as a tool more than humans.”

Dr. Spikins also explains, “Human eyebrows move a lot, and we use them to express a range of emotions and signals. The big neanderthal brow ridge would make those subtle movements harder.”

And, it’s of course correct to mention that a lot is said in the slight raise of an eyebrow, a narrowing of the eyes, or a fractional smirk. If dwarves, typically depicted with their thicker, heavier brows and full beards, would find it harder to display the range of facial expressions that humans can manage, that’s another hurdle that communication would have to overcome. Orcs – and we’re especially thinking of half-orc/half-cauliflower Gothmog – would theoretically have the same problems.

The Last Word on Communication?

So what does all this mean for Middle-earth? If the variety of human species, with all their differences, were able to interact and communicate with each other in some way (albeit with a lot of barriers) then it might be the case that, actually, Tolkien’s vision of interconnected fantasy races, talking and mingling, might not be so fantastical after all. Nevertheless, while they may have been able to communicate with one another in some way it wouldn’t necessarily have looked like vocal language as we know it, and it’d be impossible to conclude that they would have found it quite as simple as Tolkien depicts.

But, then, where’s the fun in that? Even in a work of great, meticulous fantasy literature, the audience is required to suspend their disbelief in certain moments. In fact, it’s arguably that requirement of a suspension of disbelief that makes fantasy so compelling, and the perfect form of escapism for so many.

Despite his background in language and linguistics, Tolkien decided that the humanoid (and even some non-humanoid: ents, anyone?) races of Middle-earth should be able to communicate without the barriers of the real world. And in a realm in which magic exists, why not?

We wouldn’t have it any other way.

The Lord of the Rings: The Rings of Power arrives on Prime Video on September 2, 2022.

Learn more about a pivotal character in The Lord of the Rings: The Rings of Power?in our exclusive interview with Charles Edwards who plays Celebrimbor, the Elf that forged the Three Elven Rings. Click on the article below to read!

James Osborne
James-O-E-Osborne
James is a freelance TV and film writer from the UK. When he's not rewatching Breaking Bad or looking for second hand Philip K. Dick books, he's usually walking his dog or making a loaf of bread.