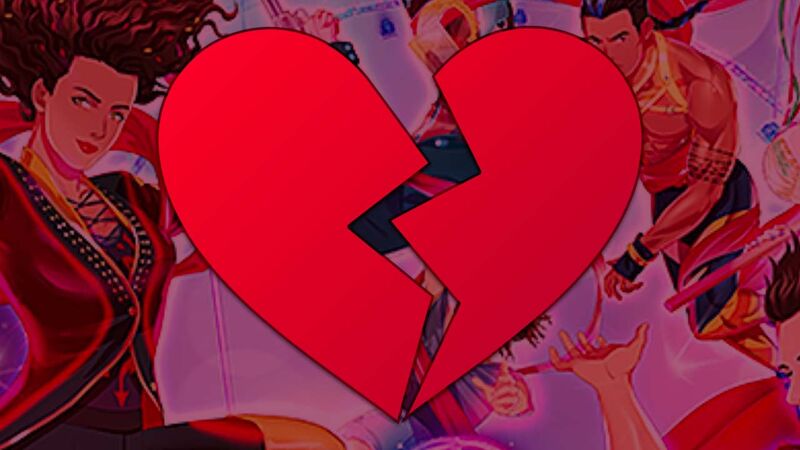 7 Games to Fill the ‘Lovestruck’ Void

Voltage Entertainment recently announced that they would be shutting down popular mobile dating sim Lovestruck: Choose Your Romance, driving an arrow through the heart of romance game fans everywhere. The visual novel offered a massive array of stories with a wide range of settings, genres, and love interests to choose from. But now, Lovestruck fans have a hole in their lives in the shape of the roguish pirate, beautiful witch, or ruggedly handsome Big Bad Wolf (but like a sexy human version) that used to always be there.

So, what now? Wander through the app store minefield, drifting aimlessly amongst the Candy Crush rip-offs and slime simulators, looking for a safe place (and a strong pair of arms) in which to land? Please don’t do that; it’s not safe to go alone. Take my hand, and I’ll lead you through the marvelous world of interactive romance mobile games. We will find a suitable substitute for your old favorite. The healing begins now.

This game really puts all their cards on the table with its title. What’s this game about? It’s about making choices! In stories you play! That’s pretty much it! You choose a storyline (or “book”) to follow, customize your character (usually only female protagonists are an option here, though there are a few exceptions), and dive right in. Like many other interactive fiction mobile games, Choices: Stories You Play operates on a freemium model where certain story chapters are unlocked with diamonds. You can buy diamonds, sure, if you’ve got money to burn, but you can also earn them by completing story chapters. And what stories there are!

The options on Choices mostly skew in the direction of frothy beach reads, with varying levels of heat. There are Christmastime romps like “Home for the Holidays” that give Hallmark a run for their money, and period pieces like “Desire and Decorum,” filled with longing glances and sexually charged hand-holding. There are also picks that veer into the outrageous: trashy fun like “Shipwrecked,” a tale of being trapped on a desert island with only a very gorgeous stranger for company, or “Wolf Bride,” which I won’t summarize for you, because if you can’t guess what it’s about from the title then you might not be ready for that particular journey.

Not all of the stories in Choices are romantic. If you get tired of the fuzzy feelings and steamy scenarios, then you can dip your toes into the Horror section of the app. Between the classic girl-meets-vampire-meets-werewolf tales, you can also find straight-up scares like the Victorian ghost story “Haunting of Braidwood Manor” or Walking Dead-style zombie apocalypse story “Wake the Dead.” These can be a bit unintentionally hilarious with the game’s character creator, however. If you’ve never seen your blank-eyed smiling avatar staring into your soul as the prompt “Ready to face the undead?” pops up on-screen, I highly recommend it.

When you first download Fictif, it opens with an optional personality quiz to figure out what sort of narrative paths you might want to travel down. Questions include things like “How do you like to be romanced?” as well as inquiring about your preferred subgenres and the type of characters you’re most interested in. (For example, it asked me if I prefer “Heroes or Gods.” You don’t need to know what I picked. That’s personal.) After that, it matches you with a starter story. If that all sounds a bit too much like school (or Buzzfeed) then you can skip the quiz and choose a story for yourself. When you begin a story, you have the option to fill in your name and choose between She/Her, He/Him, and They/Them pronouns. Then you’re all set, and ready for Fictif to sweep you off your feet.

Though Fictif doesn’t yet offer as many different stories as an app like Choices, they seem to have opted for quality over quantity. There are breathless historical dramas about Old Hollywood glamor or the glitzy world of the 1920s. There are pulpy murder mysteries, mansions filled with monsters, and isekai fantasies, all of which dare to ask the same, burning question: will the protagonist find someone to kiss? Choose wisely, and the answer will be a resounding “Oh, yes.”

The gameplay of Lovelink is a bit different from the rest of the titles on this list. Instead of operating like a classic visual novel, Lovelink adopts the interface of a fictional dating app, complete with swiping left or right on various singles. When you match with someone, you embark on their storyline, learn more about their life, and even meet up in (virtual) person.

A game set almost entirely within a dating app might not seem like much fun. We already spend so much time swiping until our thumbs hurt, sorting through all the creeps and weirdos in a 20-mile radius. Why bring that mess into our gaming time? Because Lovelink isn’t your ordinary dating app. It’s like if Tinder could guarantee that every single person you matched with would be fun, interesting, and not just using you to make their ex-girlfriend jealous.

Like Lovestruck, Lovelink is not afraid to explore a variety of genres. Some characters are right out of a rom com, like the handsome-but-lonely professional chef (ooh, he’s been hurt in the past but you can make him believe in love again). Others belong in a horror film, like the sexy-but-deadly vampire (you can fix him!) or a woman whose work retreat in the woods takes a killer turn (she’ll be right back!). The game even has limited-edition seasonal love interests for a simulated holiday fling, only instead of your high school bully sliding into your DMs, it’s a DILF Santa Claus ready to slide down your chimney. (Not like that.) (Okay, exactly like that.)

The game is very LGBTQ+ friendly, with a customizable protagonist and an assortment of male, female, and nonbinary love interests to choose from. So, you can swipe to your heart’s content, and the only thing you have to worry about is whether dinner with your vampire lover’s parents will end with them having you for dessert.

The Arcana: A Mystic Romance

The Arcana is a game that really demands you play your cards right. Your tarot cards, that is! Set in the mythical world of Vesuvia, this fantastical mystery romance is based on the 21 Major Arcana cards of the traditional tarot deck. After providing their name and pronouns, the player takes on the role of a talented magic student and tarot card reader. While sitting in their mentor’s shop, they are interrupted by a beautiful woman demanding a reading. Intrigued by the reading’s results, she invites our intrepid protagonist to the palace to help solve a royal mystery. From there, they can explore and see just what the (metaphorical and literal) cards hold.

There are six love interests available in The Arcana: Asra, a magician and magic teacher whose young appearance hides a wealth of wisdom; Muriel, a reclusive outsider from the protagonist’s forgotten past; Portia, a friendly, talkative maid who works in the palace; Nadia, the elegant Countess of Vesuvia; Julian, a charismatic doctor accused of a terrible crime; and Lucio, an arrogant count with a flair for the dramatic. All of these characters are romanceable regardless of gender, so… pick a card, any card.

Like Lovelink, Mystic Messenger takes place largely within a fictional app. However, Mystic Messenger is not a dating app. Like its name implies, it is a messaging app, one that the protagonist downloads on a whim while looking to kill some time. When she first opens the app, she receives a message from an unknown user who tells her to travel to a strange apartment. Because she has no sense of self-preservation, she goes, and is pulled into a mystical group chat filled with attractive men, which is probably one of the better outcomes a person could hope for with this setup.

From there, the story unfolds through text messages and phone calls with the various characters, including Zen, a gorgeous but self-obsessed actor; Yoosung, a student addicted to a video game that’s not not League of Legends; Jumin, a wealthy heir who’s obsessed with cats; 707, a hacker with hidden depths; and Jaehee, a dutiful assistant with dreams of something bigger. Though there’s only one overarching story to Mystic Messenger, there are a variety of paths to explore, and some truly surprising twists and turns along the way. Just be careful what you choose, or, in classic visual novel style, you might wind up at one of the many Bad Endings.

There’s something undeniably fun about a romance game that goes completely buckwild with its story premises and avoids any usual friends-to-lovers arc, or a story about work colleagues that get sent on a business trip together but (gasp!) there’s only one bed at the hotel! Instead, here is a game that allows you to expand your tastes, and try something that requires a truly sophisticated palate. No more amateur hour—I’m talking about a young woman who dies and discovers that her afterlife is an Academy for handsome angels and hunky demons, and her death was the only qualification she needed to enroll! I swear I didn’t just write that down in a haze after waking up from a fever dream. That’s the actual plot of “Heaven’s Secret,” one of the many stories available to play in Romance Club.

If “the afterlife is just more school” wasn’t a hook for you, don’t worry. There’s also an alien prince who lands on Earth, a charming thief who finds herself in the supernatural underbelly of London, and a girl who has to save her brother from the Titans of Greek mythology. The stories might be silly, or even laugh-out-loud absurd at times, but there’s a giddy kind of joy to them—the shameless delight of passing around a Harlequin romance novel at a sleepover. I’d call it a guilty pleasure, but guilt has no place in the fluffy, chaotic world of Romance Club.

If you’ve ever wanted to be a contestant on Love Island, but without all the psychologically devastating public scrutiny that comes along with broadcasting your most vulnerable moments to millions of strangers all over the world, then boy have I got the game for you. All of the cocktails, hot tubs, and manufactured drama, with none of the actual drama or being perceived as a fictional character for the rest of your life no matter how much you regret having gone on the show in the first place!

In Love Island, you design a character (female protagonists only in this game, unfortunately!), and set off on a tropical getaway filled with flirty banter, games, and more partner-swapping than a square dance. You can play the game however you want: choose to stay faithful to your first match, focus on breaking up the competition, or date your way around the guys and girls of the Villa. There’s no shame in trying all the options! It’s called Love Island, not Marriage Island. There are three seasons to choose from, each with its own cast of characters to smooch and sabotage. If you’re a fan of Love Island (the show), or enjoy all the melodramatic trappings of the reality genre, this visual novel is a low-stakes way to immerse yourself in that sultry, sunny, ridiculous world.

It’s tough to lose a game you’ve poured hours of time and thought into, but, like with any heartbreak, life goes on. Lovestruck was wonderful while it lasted, an ephemeral first love that laid the groundwork for future romance game delights. All we can do now is dry our tears, open up a brand new chapter, and help some fictional characters make out. After all, in our hearts, we’ll always have Lovestruck.