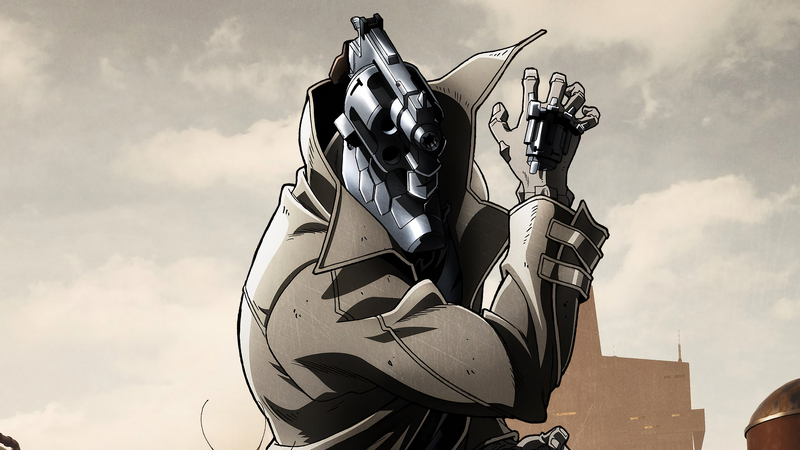 ‘No Guns Life’: More Than Just A Show About A Man With A Gun For A Head

One of the most commendable elements of many anime shows is their ability to take wacky, out-of-this-world concepts and deliver them with incredible subtext and grace that catches the audience off guard. One of those shows is No Guns Life and for any fans that haven’t watched it yet, the main character is quite literally a man with a revolver for a head. Juzo Inui is desperate to find answers about why this transformation was done to him, since he has no memories of his life before being a literal gun-for-hire. Was it a willing decision? Punishment? Only time will tell. It’s set in a dystopian, cyberpunk future where prosthetic limbs and enhancements have become a normality — those with these robotic implants are called ‘Extended’. It’s an action-packed thriller that seems goofy on the surface, but it boasts some fascinating themes to explore underneath all the guns and bravado.

Like many other popular anime shows about androids, superpowers, and mecha fights, No Guns Life looks at the Human Condition and what it means to be human. Just on the surface, if a person has their head removed and replaced with a revolver alongside other robotic enhancements, are they still the person they used to be — or something new? That’s the problem Juzo has to face on a daily basis.

When he’s not out to make a buck apprehending any Extended with a bounty on their head, you might just find Juzo doing the right thing – or trying to at least The first half of the series sees him rescue Tetsuro, an Extended who has the tendons in his arms and legs cut by the Beruhren Corporation. Tetsuro can control other Extended bodies using an illegal implant called Harmony. Tetsuro and Juzo’s relationship is fascinating as the veteran fighter sees something of himself in the young boy and tries to ensure that Tetsuro’s future is better than his own.

Obviously a tale discussing the dangers of mega-corporations and capitalism aren’t the flashiest of themes, but when it’s dressed up in a cyberpunk guise of weaponized prosthetic limbs and explosive fights, it’s an easier pill to swallow. All the Extensions have to be bought and sold legally, any that are acquired through the black market could lead to fatal seizures if the body rejects them. Companies like the Beruhren Corporation have created an entire industry around the Extended and ensuring the market is regulated.

It also acts as an underlying commentary on medical insurance too. After all, the Extended are having to pay to keep themselves healthy and to ensure their Extensions are kept in good quality, so they don’t have to risk losing a limb. The Beruhren Corporation also precisely placates the population into obeying the law using consumable products like medicinal cigarettes that reduce the nerve pain caused by the Extensions. If the working class decide to become unruly or attempt to change the system — the nefarious conglomerate overlords will yank away their coping mechanisms in the blink of an eye. For fans who’ve already watched the first season, you’ll know we’re obviously talking about the villainous Hugh Cunningham. There’s easily some political subtext about a villainous businessman controlling some of the most powerful assets in the world, but that’s an article for another time.

But No Guns Life also briefly taps into the military-industrial complex, as the Beruhren Corporation supplied Extended people to be used in the war which took place years before the series picks up. Unfortunately, the first Extended to be used in combat, Hayden Gondry, lost his mind during the conflict and brutally murdered his entire squad. The Reconstruction Agency has an entire branch dedicated to policing the Extended over fears that history might repeat itself.

The show’s anti-capitalist themes often pop up in the cyberpunk genre and No Guns Life sits comfortably in the category that anime fans are all too familiar with. Alongside monolithic skyscrapers that pierce the sky, there’s plenty of back-alley settings with crudely put-together technology that serve the everyday needs of the population. In fact, most citizens in the series have some form of Extension, be it robotic hands with a revolver chamber in them, a prosthetic jaw, or — like our iconic protagonist — a gun for a head. It’s fascinating to watch as the action constantly spills into the winding alleyways of this nightmarish future and seeing everyday people go about their lives but with a metal arm or artificial eyes. It’s moments like these that put the audience in the perspective of normal citizens, what would it be like to live in that world? What would it be like to have your hand replaced with a weaponized limb? Real-world prosthetic technology is obviously no way near as nefarious as the one in No Guns Life, but the leaps being made in new ways to help those that need them are truly astounding. But science fiction is at its best when it tells a very real story in a fantastical setting, it just so happens that this one features a man with a revolver where his head should be.

A common element in many cyberpunk stories is the noir influence on the genre, becoming its own tech-noir sub-genre, and No Guns Life leans into that in a big way with Juzo being a hardened private investigator. One of the biggest driving factors of the story is Juzo’s journey to find out why he was turned into a cyborg and to hopefully recover his lost memories. Also, did anyone else pick up on the fact that because he constantly smokes, he’s literally a smoking gun? That’s an incredibly visual pun from the creators, and we’re here for it.

Finally, one of the most impressive things about the series is how creative it gets with the action. The Extensions allow the characters to get in some high-octane stunts that are thrilling to watch. Our favorite (and possibly one of the most iconic) comes right at the end of the first episode, and sees Juzo use his Funke Faust (his modified hand) to stop a train moving at high speed with a single punch to rescue Tetsuro. Some fights are undeniably impressive, even just by their concept. For example, how would a normal person fight an Extended? Cronen von Wolf is an interesting enemy for Juzo, as the detective instantly underestimates him since he has no Extensions at all. The Reconstruction Agency squad leader instead uses agile moves alongside poison needles to briefly disable Juzo. The bigger they are, the harder they fall.

While No Guns Life only started airing in the last few months of 2019, the second season can’t come quick enough! Sure, the series is a little on the (snub) nose at times, but the mystery has taken Juzo, Tetsuro, and their new friend Mary in some bizarre new directions (like ghost hunting) and it’ll definitely be interesting to see where this show goes next.