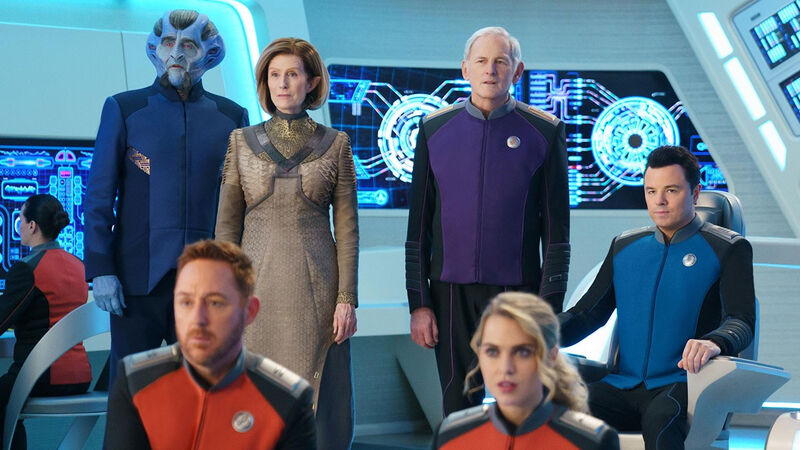 ‘The Orville’ – Everything You Need to Know Before Watching Season 3

Now streaming on Hulu, The Orville – now fittingly called The Orville: New Horizons – has returned with a more focused, serious narrative, and its familiar yet appreciatively irreverent take on sci-fi deep-space exploration.

When we left off with Captain Ed Mercer (Seth MacFarlane) and the crew of the Planetary Union vessel, the USS Orville, at the end of Season 2, they had just barely fended off a devastating attack from the Kaylon and fixed a broken timeline that threatened to doom the galaxy. Now, after over two pain-staking years of waiting, Season 3 has picked up much of the groundwork laid in Seasons 1 and 2, though with a fresh lens that welcomes new fans to the series.

One of The Orville’s most significant plot shifts came mid-way through Season 2 in the two-parter episode, ‘Identity’. Viewers were finally introduced to Isaac’s (Mark Jackson) homeworld, Kaylon 1. Kaylon 1 is home to a race of emotionless androids who destroyed their oppressive original creators.

Isaac’s role on the Orville continuously proved invaluable thanks to his cybernetic abilities, so after suddenly shutting down, the crew has no choice but to take Isaac to Kaylon 1 if they’re to have any hope of reactivating him.

However, upon reactivation, it’s revealed that Isaac is working against the Orville and his ‘shutting down’ is part of a trap orchestrated by the Kaylon. The Kaylon, using data based on Isaac’s personal experience, believe all sentient beings to be a threat, and as such must be eliminated, starting with earth.

In the end, Isaac chooses to save the Orville and prevent the destruction of the earth, but the damage had been done; casualties were high and Isaac, now unable to return home, is stuck aboard a ship whose crew no longer fully trusts him – including Chief medical officer Doctor Finn (Penny Johnson Jerald) who had begun to explore a romantic relationship with Isaac.

New Horizon’s premiere, “Electric Sheep,” focuses directly on the aftermath of the Kaylon attack, as the crew reconciles with Isaac’s decision to both betray and then save the Orville. This is further complicated by the arrival of the ship’s new navigator, Ensign Charly Burke (Anne Winters), a survivor of a Union vessel destroyed in battle by the Kaylon.

One of the earliest examples of The Orville‘s willingness to explore complicated storytelling themes came in Season 1’s episode “About a Girl. ” The episode follows Second Officer Bortus (Peter Macon), a member of the primarily all-male Moclun species. When Bortus births Topa, a female, he and his husband Klyden (Chad Coleman) seek to ‘correct’ this anomaly by altering their daughter’s sex.

The episode examined gender identity through the scope of an alien culture that is largely at odds with the Orville crew’s perspective.   Despite the best intentions of the crew, the appeal against surgery change is overruled on Mocus, and Topa is forcibly ‘corrected’.

“About a Girl”  is an early warning for us that not every ending in Orville will be a happy one. Botus’ growing regret over Topa’s fate and the increasing strain it places on his relationship with Klyden is just one of the seeds Season 1 planted that we see grow through the second season.

We also learn, in the Season 2 episode “Sanctuary,” about a secret network of escaped female Mocluns, run by the Moclun Haveena, who yearn for freedom and sovereignty.

Both episodes culminate in Season 3’s “A Tale of Two Topas, ” where Topa (now older) begins exploring their own gender identity. Topa’s own introspective revelations once more set the young Moclun, and The Orville, onto a collision course with Moclus law.

Peace with the Krill

Before the emergence of the Kaylon threat, the Krill were presented as the biggest adversaries to the union. The Krill is a humanoid species that follow an extremely ruthless, dogmatic religion that views all other species as insignificant. A belief that is directly at odds with that of the Planetary Union.

While the crew of the USS Orville has numerous encounters with the Krill throughout Season 1, it’s in the second season that learn just how devious Krill are.

At the start of Season 2, we’re introduced to Janel Tyler (Michaela McManus), the ship’s new cartographer. Jane quickly befriends and enters a romantic relationship with Ed, who’s still struggling to reconcile his feelings for his former wife, and First officer, Kelly Grayson (Adrianne Palicki). Unfortunately, this romance is cut short in the episode “Nothing Left on Earth Excepting Fishes,” where Janel is revealed to be Teleya, a disguised Krill whose life Ed had previously spared back in Season 1.

Teleya intended to capture Ed as part of a Krill operation, but the plan goes awry and the two find themselves stranded, forcing them to work together to survive. After being rescued by the Orville crew, Ed, believing his time with Teleya as Jane to be more than just a fallacy, allows Teleya to leave in the hopes that it will help open diplomatic relations with the Krill. Teleya remains opposed to the idea, but there’s evidence that her time with Ed might have slightly eroded her xenophobic views.

Fast forward to “Identity” and “Identity Part II,” and things take a more hopeful turn when the Krill are convinced to join the battle for earth against the Kaylon. Now with a common enemy in the Kaylon, the krill have a reason to explore peace with the Union.

Season 3 picks up this thread as the Union is closer than ever to forming a peace treaty with the Krill. Though complications arise with the reappearance of Teleya, who seemingly disapproves of the treaty while also harbouring a devastating secret from Ed.

Backed by highly positive reviews and audience response, The Orville: New Horizons is proving for many to be some of the best sci-fi to watch. Season 3 is now on Hulu.