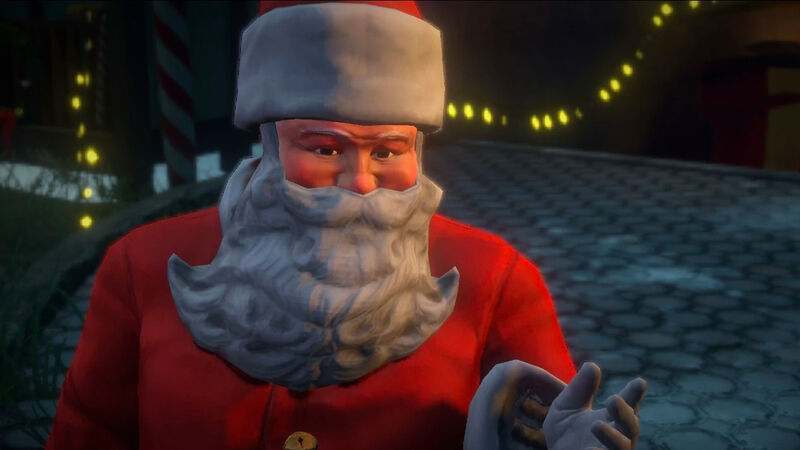 Well folks, it’s the holiday season once again. Somehow it just keeps happening every year. The days get shorter, the shopping lists get longer, and the chill in the air ushers in the perfect atmosphere for spending time with your loved ones. Or you could just turn off all the lights and play video games until your eyes hurt.

Santa’s image is just about everywhere this time of year, and video games are no exception. Saint Nick has made his fair share of appearances throughout the video game world, from fighting games to farming sims. So hang those stocking by the chimney with care, because we’re ranking some of the most iconic versions of Santa Claus in video games, using the one trait any Santa worth his salt (or sugar) should possess: jolliness.

You’d better watch out, you’d better not cry, you’d better not pout, and I don’t think I need to tell you why. Satan Claus is coming to town. Phasmophobia decided to swap out Holiday Cheer for some good old Holiday Fear with their “Cursed Possessions” update, which adds a variety of festive new content—including this candy cane-wielding Santa Claus apparition that’s here to put the “Jesus Christ, what is that thing?!” back in Christmas. Look at him. His milky eyes (and no cookies to go with them). His exposed bones. I don’t want to know what Santa’s bones look like! I want to imagine it for myself! This is a Yuletide abomination, and he’s not jolly! He’s not jolly at all!

I don’t personally believe in pitting icons against each other, but, sadly, the team behind Gex 3: Deep Cover Gecko doesn’t agree. This third installment in the Gex franchise features a battle between the beloved anthropomorphic gecko and an evil version of Santa Claus, as part of the “Holiday Broadcasting” level. This Santa has no business asking whether I’ve been nice when he looks (and acts) this mean, from his glowing red eyes to his use of presents as a weapon. The only thing about this Santa that could be considered jolly is the fact that he’s not just a shambling corpse. That’s a pretty low bar.

This version of Santa, found in the first episode of Sam & Max Season Two, isn’t inherently evil at heart, but he is ruled by fear. Terrified of an evil spirit that has made its way to the North Pole, Santa lets his paranoia get the best of him and decides to shoot at his elves with a machine gun instead of just, you know, asking them if maybe they’re possessed. He’s not jolly, but he could become jolly at some point in the future. He’s not a lost cause just yet. Just take the weapons away and maybe give him some eggnog. And therapy.

A lot of Santa Claus stories focus on the man’s generosity, his capacity for spreading joy and dispensing toys to children, or his discrimination against reindeer with red noses. Very few of them have been brave enough to ask the real question on everyone’s minds: What if Santa was a wrestler? Don’t worry, the team behind ClayFighter 63⅓ was brave enough, and whether you like it or not, they brought Sumo Santa to life. Sumo Santa is an evil clone of the original Santa, intent on taking over the North Pole by defeating the super buff snowman Bad Mr. Frosty in physical combat. Sumo Santa is an antagonist, but there is no doubt that he gets a lot of joy out of what he does. This guy loves three things: fighting, wearing a red and green loincloth, and Christmas-themed puns. Some of his mid-fight taunts include gems like “Santa’s gonna sit on your lap!” and my personal favorite, “Jingle this all the way.”

Saints Row isn’t exactly a game franchise that you would think to associate with Christmas or Santa Claus, but if there’s anything Saints Row loves more than coming up with some of the wildest weapons in the world of video games (Apoca-fist, anyone?) it’s finding new ways to surprise and baffle their players. In Saints Row IV: How the Saints Save Christmas, the player is given an important holiday mission: save Santa and defeat an evil version of him known as Clawz. Clawz is a villain, sure, but he’s got undeniable style. He sports a dramatic beard and some killer accessories, and to top it all off he speaks in ominous rhyming couplets. Nothing says holiday spirit like a rhyming couplet!

When talking about the story of Santa Claus, a lot of skeptics ask how he could possibly manage to get around the entire world in one night. Well, did you ever stop to consider that Santa might be a tank? I don’t mean that’s the character class he likes to play, I mean a literal tank. Santa Claus head on the top, moving track and great big guns on the bottom. If you think that sounds absurd, then you should direct your attention to Terraria. This Santank is a hard-mode mini-boss that appears during the game’s Frost Moon event. He’s mostly preoccupied with attacking players with his chain gun and spiked balls, but sometimes when he’s defeated, he drops loot! That’s almost like delivering presents!

Speaking of evil Santa villains that speak in couplets, this villain in the fourth installment of the Dead Rising franchise has the soul of a poet too. In an encounter with him, the player can hear the man say, “The winter is deadly, it bites to the bone. Poor Frank has been naughty, and now he’s alone.” Judging from the general subject matter of Dead Rising, you might expect this Sadistic Santa to be another undead monster, but no! He’s still a monster, but an entirely human one. Though he was once a mall Santa, this former employee of the Willamette Memorial Megaplex decided to pivot to a more murderous career path after the events of a zombie outbreak. Now, he spends his time killing people and stuffing presents into their corpses and leading an army of violent elves. His actions may be despicable, but you have to admit, he’s really committed to the whole Santa gimmick. He found his niche and he’s sticking to it!

Santa Claus appears as a minor character in the action role-playing game Secret of Mana, and though he’s not lacking in holiday spirit, the rest of the world around him seems to be. Santa tries his best to look on the bright side, but even Santa isn’t immune to seasonal depression. During the events of the game, Santa plunges into despair over the fact that most children don’t believe in him anymore. He tries to use the power of a Mana Seed to grow a magical Christmas tree, but the power corrupts him and transforms him into a frost monster instead. Thankfully, once the game’s protagonists defeat him, he turns back into his usual cheerful self.

In a lot of the entries on this list, Santa is the villain of the game. Not so for Toejam & Earl, a tale of two aliens crash-landing on earth and searching for the missing pieces of their ship. In this particular game, Santa is a victim of the titular characters’ antics. The alien duo has the opportunity to sneak up on Santa Claus and attempt to steal his sack of presents. Not only are they stealing from him, but from hundreds of children who will never get the toys they asked for! I don’t care if you’re an alien who doesn’t understand Earth holidays, some things are just unacceptable. Thankfully, if Santa spots the extraterrestrial thieves in time he can act quickly enough to escape on his jetpack. That’s right, Santa has a jetpack in this game. The future comes for us all.

The original Shenmue game featured a surprise Christmas Day appearance from Big Man Christmas himself. While walking through the streets, players could encounter Santa and have the delightful experience of him wishing them a Merry Christmas, followed by the perplexing experience of him telling them to buy a hamburger. Not the most traditional Christmas feast but hey, if it’s good enough for Santa then it’s good enough for you.

Okay, so this The Sims 4 character is not called Santa Claus, but he’s a wintertime holiday man with a beard, magic powers, and the inability to die, so he counts. Father Winter visits the world of The Sims around the holiday Winterfest, appearing to dispense gifts to all of the little Sim children. Or, if you’re an enterprising adult with a violent streak, you can fight him for presents. Just beat him up and take the presents. He probably won’t be too happy about it, but there’s really nothing stopping you aside from your own guilty conscience and the possible threat of magic retribution. Also, because this is The Sims and I know you’re thinking about it: yes, your Sim can get pregnant with Father Winter’s child. You can have your very own Santa Baby.

He might not have any in-game dialogue, or even appear in Stardew Valley gameplay at all outside of a random appearance on the player’s shipping summary screen on the 24th day of Winter, but he’s got everything you need from a Santa Claus. He’s got the sleigh, he’s got the reindeer, he’s flying across the sky with a bunch of presents, and most importantly? He minds his own business and just does his damn job. Thank you, Stardew Valley Santa. You may not be the most exciting, or any good in a fight, but you truly are the best Santa Claus that the world of video games has to offer.