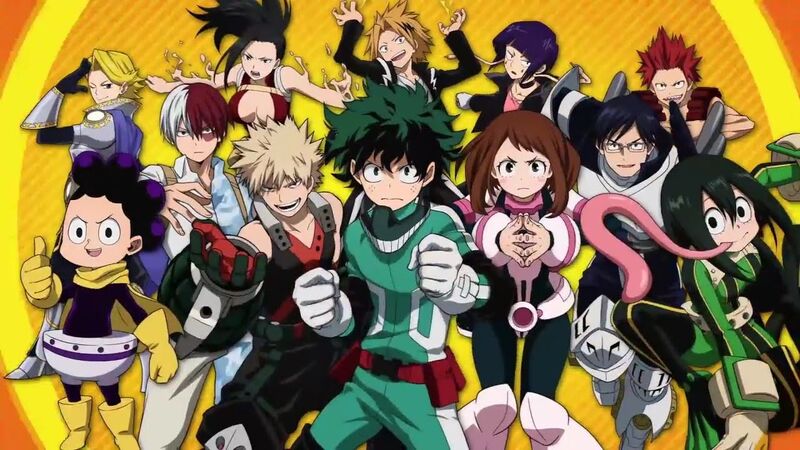 My Hero Academia Students and Their Starter Pokémon Part 2

This is part two of imagining that the students of U.A. class 1- A in My Hero Academia had to pick a starter Pokemon as part of their hero training. We’re trying to closely match the Pokémon’s abilities with the students’ Quirks. Let’s see which Pokémon will be helping these future heroes go plus ultra!

The Shining Hero would be a perfect match with Oshawott as they both have abilities that involve their stomachs being the source of their powers. Oshawott has a scalchop that can be removed from its belly and used as a sword while Yuga has a sparkling laser cannon he can shoot from his navel. Yuga can blind and trap the villains with his sparkling laser and Oshawott can finish them with his scalchop sword.

Yuga often attempts to hide his embarrassment behind his Quirk with his false confidence; with Oshawott by his side, he can gain the true confidence he needs to make his Quirk shine even brighter than it already does.

Mashirao (aka Tailman) has to have a Pokémon companion with an equally impressive tail to fight the villains and Snivy is a fantastic match. While our Tailman hero-in-training uses his knowledge in martial arts to battle villains, Snivy can use its abilities to trap them so that Mashirao can gain even more of an advantage in battle.

Snivy is known for abandoning their trainers if they don’t live up to their expectations, but Mashirao won’t need to worry about that! He is not only a strong hero, but he is quite intelligent as well (which is exactly what Snivy needs in a trainer).

These two will make a great team. You know what they say: two tails are better than one!

Koji Koda (aka Anima) has the Anivoice Quirk, which allows him to command animals by speaking to them. Even though Koji can create many companions to help him in battle, Torchic is already a loyal Pokémon and wouldn’t need any commands to assist Koji.

Koji has used birds as a smokescreen before, and Torchic could assist in leading the way for his bird companions or any creature that he gives a command to in a fight. Torchic can also help with eating and disposing of any bugs near Koji, which is very important because he has a giant fear of bugs. Besides, it would also be adorable to see little Torchic sitting on Koji’s brutish shoulders!

Rikido Sato (aka Sugarman) has the quirk Sugar Rush where he needs to consume 10 grams of sugar in order to activate it. At the same time, Treecko can increase its speed by 50% after consuming a berry.? Rikido has incredibly high power stats but lacks in speed, so Treecko can balance that weakness out. Treecko has a Normal-type ability, Pound, that pounds its opponent with its body, tail, and legs. As soon as Rikido gets his sugar-induced Quirk strength, these two could crush any villain in their path. Treecko and Rikido can stock up on berries and treats to share before battle and save many citizens together with their increased abilities.

Mezo Shoji (aka Tentacole) has the Quirk Dupli-Arms, which gives him tentacles alongside his regular arms. His power stats are incredibly high with this Quirk, since he can manifest several arms at once.

Chimchar has several Fighting-type and Fire-type abilities that involve punching as well. When Chimchar is evolved into Monferno, its punching abilities increase significantly; if we put these two together, they’lll be a fiery punching duo.

Kyoka Jiro (aka Earphone Jack) has a pair of headphone jacks hanging from her earlobes. When she plugs those ear-jacks into something, she can hear any and all sounds and vibrations in her area. Kyoka has an incredible passion for music and owns several instruments that she can play, and Grookey has drums it can play to increase its energy for battle. Not only could these two benefit from their abilities in battle, but they can also create beautiful music together! We would love to hear what songs they create, and hopefully they can perform them for the next gathering at U.A High.

Stat-wise, Kyoka lacks in the power department. Grookey has higher attack power stats to balance that out for her, so she can be on the lookout for villains while Grookey gets powered up to fight.

Hanta Sero (aka Cellophane) has a Quirk called Tape, which allows him to shoot tape-like strips out of his tape dispenser-like elbows. Bulbasaur has vines and tentacles that work similarly to Hanta’s cellophane tape, so they can both trap villains and keep them in one spot while they go and rescue any citizens in peril.

Another helpful ability that Bulbasaur has is Sleep Powder. As soon as Hanta and Bulbasaur grab and trap the villains, Bulbasaur can cover them in Sleep Powder to make sure they don’t try to make a quick getaway. This duo will be incredibly useful in battle with other heroes, especially if they are outnumbered.

Toru Hagakure (aka Invisible Girl) is completely invisible all the time—the only way to see her is when she is wearing clothes. Sobble isn’t invisible all the time, but can become invisible when it gets wet. Both Toru and Sobble can be concealed together (as long as Toru keeps a bottle of water with her to transform Sobble into its camouflaged form).

Both Toru and Sobble lack in the power department, but have high speed stats. Together they can quickly rescue citizens without ever being seen. Any villains that take notice of floating people escaping their evil plans will be far too late to do anything about it. This duo will be the intangible heroes needed for sneak attacks and quick escapes.

Mina Ashido (aka Pinky) has the Acid Quirk, which allows her to produce corrosive liquid from her body, as well as non-corrosive liquid from her feet so she can quickly slide around. Ralts, who has a similar pink color scheme to Mina, can assist with psychic abilities such as Confusion and Disarming Voice to paralyze their foes. Mina could then come in with her Acid Quirk and render them useless.

Ralts can sense the emotions of other Pokémon and humans, which is something that Mina will appreciate since she’s an upbeat person that wants to cheer up those around her. Ralts could give her a heads up if one of the other heroes needs some emotional support. This Psychic-type Pokémon will work well with Mina both in and out of battle, and we think these two will be best of friends.

Mineta (aka Grape Juice) has the Quirk Pop Of, which lets him produce and pluck purple ball-shaped objects off of his head that stick to any and all surfaces. Similar to Mineta’s Quirk, Chikorita also has its main ability on its head. However, instead of having objects it can take off, Chikorita has a giant leaf that it spins to keep foes away. If it spins the leaf fast enough, it can trigger its Razor Leaf ability, in which green blades fly around directly in front of it.

Chikorita can keep villains at a distance with its Leaf Spin—exactly what Mineta needs, since he is not skilled in close combat, and needs some distance to really get full use out of his Pop Off Quirk.

Now all of the class 1-A students of U.A. High have a starter Pokémon companion, who can join them on their journey to become the next world-saving hero. We hope you found these lists to be plus ultra!

Cassi
CassiBlossom
Someone who is trying to divide her time equally to all of her obsessions such as: Anime, Horror films, manga and video games.