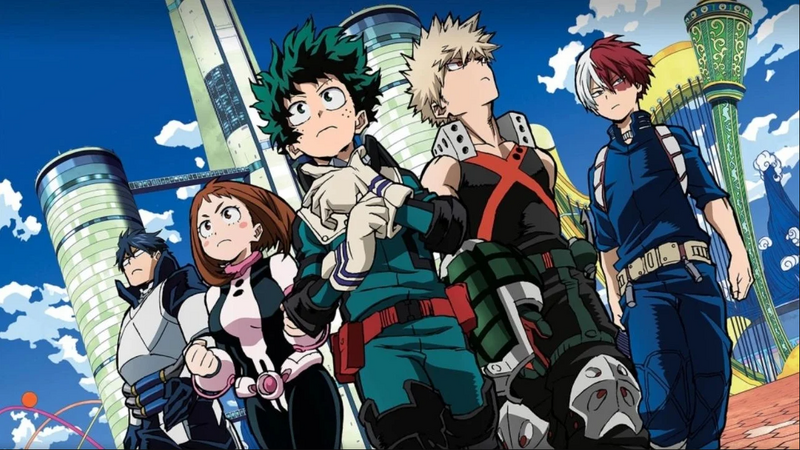 My Hero Academia Students and Their Starter Pokemon Part 1

Imagine if the students of U.A. High had to select a starter pokemon when enrolling into the academy. The students in the My Hero Academia universe would have to select a pokemon that has or can have abilities that would work well with the U. A. students’ quirks. We have put together a list of students from class 1-A and matched them with the pokemon we think would enhance their quirks best so they can go plus ultra with their new companions!

Izuku Midoriya aka Deku would work really well with Chespin as his starter pokemon. Midoriya’s inherited quirk One For All can significantly enhance the user’s physical abilities into superhuman strength. Chespin can learn the ability Bulk Up which, like Midoriya’s quirk, can enhance their physical strength and size. Chespin has a higher amount of defense too, which is good because Midoriya’s quirk usually tends to be more offensive in battle. Midoriya could use the defensive balance. Also, Chespin looks a lot like him when Midoriya is in his full hero suit which makes them the perfect duo.

Katsuki Bakugou has an explosive quirk that would work very well with Cyndaquil’s abilities. Cyndaquil has abilities like Flame Wheel, Flame Charge and Eruption to use along with Bakugo’s quirk. If Bakugo uses his hands to create explosions for too long he could really damage his body. To balance not completely going overboard like Bakugo normally does, it would be incredibly beneficial for Cyndaquil to step in and use their fire-type abilities as well. It also helps that Cyndaquil has similar design features as Bakugo, so these two will be saving the world in style.

Tsuyu Asui aka Froppy, with the frog quirk, working together with Froakie the frog pokemon is by far the most obvious choice on this list. Froakie would add a lot of strength abilities and give water ability support to Asui, which would enhance her fighting style significantly in terms of controlling the water used to trap and battle villains.?Personality wise both Froppy and Froakie give off the impression that they’re absent-minded while in battle but in actuality they both are very aware of their surroundings, this would work to their advantage because it’s inevitable that they will be underestimated in battle by their villainous foes which will leave a lot of room for this duo to show the world what they are capable of.

Tenya Ida aka Turbo Hero: Ingenium’s engine quirk gives him incredible speed because of the engines attached to his legs, so he would need a pokemon that can keep up with his pace. Scorbunny leaves a trail of flames behind them due to the friction created while running at super speed and they can ignite their feet in order to produce a flame-covered powerful kick, Ida can use his engines to mirror the same effect of Scorbunny’s ignited kick for a dynamite combo that would turn their enemies into dust.

Ochaco aka Uravity has the zero gravity quirk; she can make things float by the touch of her hands. Eevee would be a good match for her because Eevee can evolve into Sylveon, which is a fairy-type pokemon that has wind abilities that can assist in moving the objects Ochaco touches. Combine Sylveon’s fairy wind with? Ochaco’s zero gravity and no villain will be able to even approach the heroes of U.A.!

However, it would take some time to get Eevee to be able to evolve so Ochaco would have to heavily rely on a few of Eevee’s natural abilities like Helping Hand to assist her in battle, Helping Hand can boost an ally’s abilities up to double and Ochaco could use that boost to enhance her zero gravity quirk until she is able to evolve Eevee into the ultimate partner Sylveon.

Shoto has the ability to control both fire and ice because of the combined quirks from his parents, but prefers to use his ice ability over fire. Totodile is a water-type pokemon with a lot of ice abilities such as Ice Fang, so Shoto won’t feel like he has to use the fire side of his quirk if the ice ability can be supported by Totodile.

There’s more to this duo than just ice abilities for a good match up, there’s quite a few normal-type natural abilities that Totodile can contribute to help Shoto win against the villains, one of them being the Scary Face ability that can reduce the speed of their foes so Shoto can keep them at arms length to freeze and ensnare them into a trap.

These two will be freezing out the foes and going plus ultra in no time.

Denki aka Chargebolt has an electric quirk which makes Pikachu one of the obvious choices as his companion. Not only do they have very similar abilities, but also look a lot alike in character design, if you look at the black zig-zag lines on Denki’s bangs it looks like Pikachu’s ears.

Pikachu and Denki not only look alike in their design but when they charge up their electrical attacks both of them have electric bolts emanating from their bodies before they send out a blast of lightning to impale their opponents. It’s as if these two were meant to electrify the villains together from day one.

Momo aka Creati has a creation quirk where she can make objects appear out of her body after eating lots of food for energy to charge it up. The bigger the object she has to replicate the more food she has to eat. Fennekin has a similar charge for their powers, they require eating a twig to charge their abilities as well. Fennekin can also pull a stick out of their tail and use magic with it, which is so much like how Momo uses their quirk, the magic that Fennekin can create will help balance any energy lost by Momo when she has to make a larger object come out of her body.?These two will be eating all day and creating objects and magic to destroy any villain in their path.

Eijiro aka Red Riot has the hardening quirk that can transform his flesh into rock. Turtwig can be evolved later on into a ground type pokemon that shoots rocks out of its back. Turtwig also has a hidden ability of shell armor, so these two will be incredibly difficult to break through when using their ground/ rock-type abilities.

Eijiro tends to use his hardening quirk as a defense not just for himself but for any citizens he is rescuing as a shield to protect them, this takes a lot out of Eijiro and one of Turtwig’s natural abilities like Absorb can give him some extra strength to keep that impenetrable fortress that is his quirk from completely wearing down.

This duo will be the ultimate defense against any powerful attack villains try to use on them.

Last, but most certainly not least, we have Fumikage aka Tsukuyomi with the dark shadow quirk which manifests a shadow creature that he can control and use to fight. Rowlet can be evolved later on into Decidueye, which is a ghost type pokemon that would work very well with Fumikage’s shadow quirk. The spirit shackle ability, which targets shadows to pin down their targets so they can’t escape, would work especially well. We know how often villains make a quick getaway so these two will make sure that doesn’t happen.

Also, Rowlet is able to naturally charge their abilities during the day using photosynthesis so when Fumikage’s dark shadow has to retreat due to low energy levels Rowlet will have energy to spare to make up for Fumikage’s quirk being immobile.

Pokemon and My Hero Academia would be such a magical combination considering how much help the heroes need to fight off villains. Having a Pokemon companion would no doubt save the world from many tragedies and take some stress off our heroes shoulders.

Checkout Part 2 of the MHA Students and their starters!

Cassi
CassiBlossom
Someone who is trying to divide her time equally to all of her obsessions such as: Anime, Horror films, manga and video games.