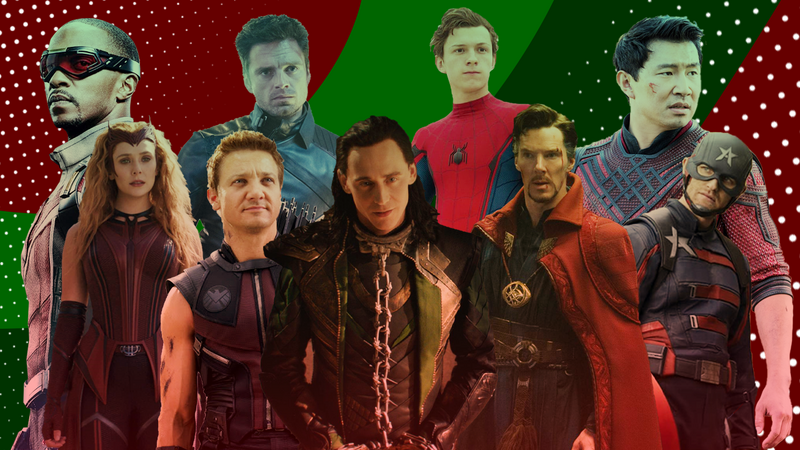 Phase Four Avengers: Who Lands on the Naughty or Nice List?

He sees you when you’re sleeping and he knows when you’re awake, and Santa Claus has been keeping track of the heroes of the MCU all year long. As he finalizes his lists this year, let’s look back on our heroes and see if they should land on St. Nick’s naughty or nice list.

After being brought back by the Blip, Bucky has spent his newfound freedom by trying to make amends with all the people he hurt when he was the Winter Soldier. His tactics at first were questionable to say the least, like threatening a HYDRA agent he helped get elected or avoiding telling the truth to Yori Nakajima about murdering his son. He does help Sam Wilson track down the Flag Smashers and save the post-Endgame world. Plus, Bucky has a therapist, working through his own trauma of being a man out of time who was brainwashed for decades; seriously, every Avenger needs to invest in their mental health. Bucky completed his atonement list of people he wronged as the Winter Soldier and has put in the work to be a better man. Because of this, Bucky has found himself on Santa’s nice list.

Hawkeye, the last original Avenger on this list, helped bring back his family and half the universe’s population by participating in the Time Heist. He and the other Avengers defeated Thanos and saved the day, which is more than enough to be on the nice list. However, in those five years between the Snap and the Blip, he went on a rampage as the vigilante, Ronin, and brutally killed criminals. He has given up those days and is looking forward to a quiet Christmas holiday with his family, but he has yet to face judgment for his actions. Until he can make amends for his Ronin years, Santa is putting him on the naughty list.

The US Government technically made John Walker the new Captain America for a brief period so we’re cheating a bit, but let’s consider him sorta-kinda an Avenger. However, while he was Cap, he killed a Flag Smasher who surrendered in broad daylight. Not to mention he did a lot more damage than good by getting in Sam and Bucky’s way. For instance, John and Lemar Hoskins escalated a calm meeting between Sam and Karli Morgenthau by arriving and trying to take control of negotiations. This led to Lemar’s death at the hands of Karli. He may have eventually come around to help defeat the Flag Smashers in New York, but it was not enough to reverse the damage he caused. The jury is still out on what exactly Valentina Allegra de Fontaine has in store for U.S. Agent, but until then, John Walker has landed himself on Santa’s naughty list.

The God of Mischief and his variants have created more mayhem than normal this year, and while he’s not an Avenger per se he is a big reason for them existing in the first place. After going rogue from the TVA with one of his variants, he and Sylvie go across time in order to get revenge on the Time-Keepers and eventually, the man behind the curtain, He Who Remains. Technically Sylvie broke the Sacred Timeline and the Multiverse along with it by killing He Who Remains, but Loki went along for the ride. Had he not interfered in the first place, the new Multiversal War may not be upon us. Better luck next year, Loki!

Poor Peter Parker. First he lost his mentor, Tony Stark, and now he lost his privacy. After being outed as Spider-Man by Mysterio, the balance between his regular life and secret identity completely falls apart. He was the only Avenger up until then to actually keep his Spider-Man secret from the world, and that was taken from him. You’d think Santa Claus would take it easy on him, but Peter does go to the Sorcerer Supreme to try and to make things go back to the way they were before the world knew he was Spider-Man. In messing with the spell in the process, this teenager creates chaos in the Multiverse. His intentions may have been in the right place, but until we know the full consequences of it, Peter Parker is on the naughty list. Sorry kid.

The newly minted Captain America at the top of Santa’s nice list. Sam saved the world from the Flag Smashers six months after saving the world from Thanos, and used his authority to get world leaders to use their leadership for good. He has attempted to right the wrongs of the Captain America legacy, starting with adding Isaiah Bradley’s story to the Captain America wing at the Smithsonian Institute. Plus, he saved his family’s boat! Enjoy your gifts from Santa Claus, Cap. You’ve earned it!

Though technically he hasn’t assembled with the Avengers to save the world, Shang-Chi has been part of an Avengers meeting where Wong, Captain Marvel, and the Hulk take a closer look at his mystical rings. He managed to save the world from the Dweller-in-Darkness that Wenwu was trying to unleash in order to bring his wife back to life. Shang-Chi also did not kill his father despite their complicated history. He can sing “Santa Claus is Comin’ to Town” at karaoke with Katy because he has found himself on Santa’s nice list. Now his sister, Xialing, on the other hand, still has some question marks based on her next move…

Doctor Strange just helped defeat Thanos, and you would think that would keep him from doing anything reckless. Instead of listening to Wong’s warning about helping Peter Parker, the Sorcerer Supreme helps him do it anyway! That kind of arrogance and involvement in breaking the multiverse lands you straight on the naughty list. There are not enough spells to change Santa’s mind on this.

Wanda Maximoff has had a rough go at things post-Endgame. Losing Vision and not being able to bury his body left Wanda completely alone; because of her grief, she turned Westview, New Jersey into her fictional TV world where she could live out her dreams of having a family with Vision. Of course, that meant keeping a town hostage, forcing its citizens to act out different storylines against their will, and threatening to spread her spell all over the world. Something like that would normally put someone on the naughty list. However, she did let go of Vision and her twin sons, Billy and Tommy, in order to set things right and free Westview. Despite threatening the world and writing most of the wrongs she committed, Saint Nick is waiting for her actions in Doctor Strange 2 to determine which list she’ll end up on.

Meredith Loftus
Meredithloftus
Meredith Loftus is your friendly neighborhood fangirl who lives in Los Angeles. She has her own podcast, Fangirl Forum, where she nerds out about anything from the MCU, Taylor Swift, and everything in between. She's waiting for the day that the Mamma Mia cinematic universe becomes a thing. Until then, you can find her here or over at ViacomCBS running the ET Live stream.