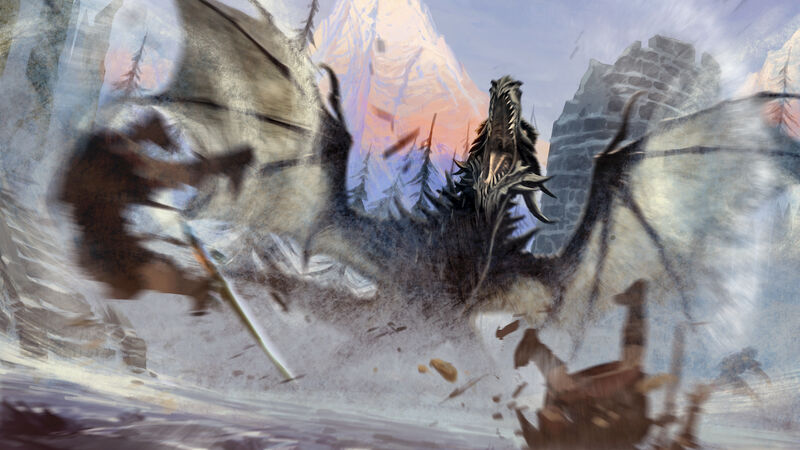 Skyrim is one of the most influential roleplaying games ever created. The epic fantasy tale spans a vast region brimming with magic, deep lore, and dangerous enemies. More than 30 million copies of the game have been sold over its 10-year reign, and its modding community has provided thousands of hours of fresh content for fans that just can’t get enough.

What helps set Skyrim apart from other action RPGs is the ability to play any type of character you want, the innumerable story possibilities, and the deep lore.

If you like Skyrim for those reasons, you’ll love Dungeons & Dragons! Here’s why!

You can play any type of character you want

Skyrim doesn’t force you to be a specific protagonist or shoehorn you into a playstyle. The same rings true for D&D, albeit to a larger extent. Across all of the official expansions and supplements, the latest version of D&D offers 13 classes, over 100 subclasses, and dozens of playable races.

Much like Skyrim, D&D offers plenty of opportunities to level up and fine-tune your character build. Whether you want to be a stealthy archer dealing death from afar, a war mage casting spells to turn the tides against your enemies, or a greataxe-swinging barbarian, D&D has you covered.

Before playing in a D&D campaign, players are encouraged to come up with unique bonds, ideals, goals, and flaws that further customize their characters and encourage them to grow within the campaign’s world. This is a departure from surface-level character appearance and combat prowess and instead puts the spotlight on how they interact with and react to people and their environment. When it comes to customizing your D&D character, the only limitations are your own imagination.

How to get started building your D&D character

D&D Beyond allows you to create up to six characters for free using D&D’s basic rules. The basic rules give you plenty of options right from the start while allowing you to get accustomed to the game.

Once you’ve had your fill of the basics, we recommend the following books (in order):

There are (almost) infinite possibilities for the storyline

Everyone knows the feeling of being sent on a quest by an NPC in Skyrim but winding up doing something completely unrelated for the next five to 10 hours. In D&D, there is a Dungeon Master, or DM, who prepares storylines, acts as the NPCs and monsters, and controls the environment the players venture in.

DMs rely on the basic rules of D&D just as much as players do, but for them, the Dungeon Master’s Guide is an invaluable tool to running the game and includes a wide variety of magic items to reward players with.

All DMs will agree that D&D and Skyrim are similar in the way that players can get distracted from the main storyline, often stumbling upon something far cooler in the process! Because players can decide to do whatever they want, there is always the chance they will latch on to an unplanned hook. When this happens in Skyrim, the system has set encounters and rules of engagement for these diversions. In D&D, DMs have to improvise or use random encounter tables to come up with challenges for the players.

Run your own Skyrim Adventure

If you are interested in running a Skyrim-themed campaign, look no further than Dragon of Icespire Peak. This introductory adventure revolves around a young white dragon that has been terrorizing the Sword Mountains region. Over the course of the adventure, the players are sent on quests to mitigate the damage that the dragon has caused. Eventually, they are even tasked with slaying the dragon itself.

Players have the freedom to choose which tasks they perform and will level up along their journey. Of course, they could head straight for the dragon and try to fell the foul beast at 1st-level. But, spoiler alert, that won’t end well.

Dragon of Icespire Peak has a huge amount of similarities to Skyrim right out of the box, but it can easily be reskinned to further fit a Skyrim-based adventure. Here are some suggestions to do that:

The worldbuilding and lore run deep

Skyrim is the fifth game in the Elder Scrolls series set in the world of Tamriel. This world, first seen in Elder Scrolls: Arena in 1994, is considered to be one of the deepest and most richly lore-filled worlds in video game history.

Skyrim’s main storyline follows the protagonist’s fight against Alduin, an immensely powerful black dragon. Sometimes referred to as the World Eater, Alduin ruled over Skyrim with an army of dragons and a cult of loyal followers during the Merethic Era. Eventually, Alduin was defeated by the nordic people. Alduin was eventually resurrected during the Dragon Crisis of 4E 201 and, along with a number of other dragons, wreaked havoc on the land once more.

If you are looking to emulate this storyline and lore in D&D, you can use the events in Dragon of Icespire Peak to foreshadow the return of Tiamat, Queen of Dragons. The lore surrounding Tiamat has a lot of similarities to Alduin. She was one of the first dragons and created other dragons that worship her; she was defeated by an alliance of humanoids and their deities; and her return to the Material Plane harbors the end of the world.

The introductory adventure Dragon of Icespire Peak can lead into a larger campaign wherein the “Ruler of Dragons” — whether its Tiamat or Alduin — is about to return to the Material Plane. The young white dragon of Icespire Peak could be one of the first dragons to get resurrected in anticipation of its master’s return.