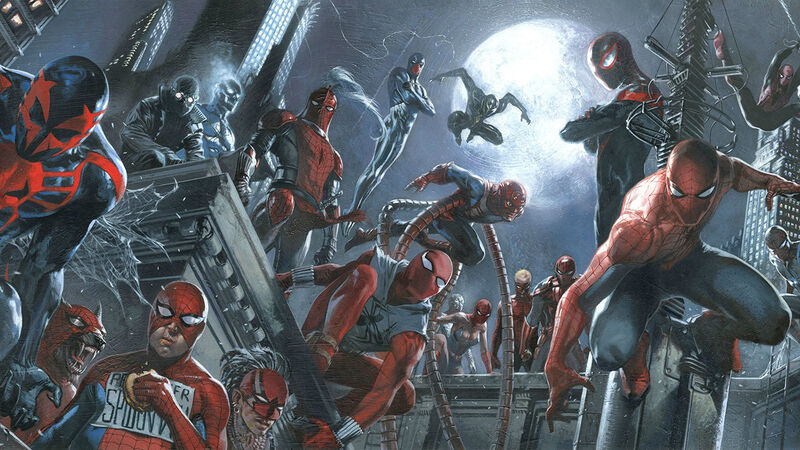 The History Of The Spider-Verse Includes Comics, Movies and More

Though Peter Parker is typically known as a kid from Queens using his powers to keep the greater New York City area safe, Spider-Man has also been known to make his presence felt across the multiverse.

Dealing with inter-dimensional shenanigans and teaming-up with alternate reality versions of himself has not always been a major component of the character’s history, though that might be hard for current fans to imagine considering how prominently other worlds play into both Spider-Man: No Way Home and Spider-Man: Across The Spider-Verse (Part One). Between the live action film’s impending December 17 release date and the recent trailer drop for the animated sequel, it seems like all the Web-Head does is delve into the Spider-Verse.

With that in mind, we’re looking to untangle the web of realities that Spider-Man has found himself in over the years. While Spider-Man was created in the 1960s, the exploration of the Spider-Verse really has its roots in the 1990s, and a popular Spidey animated series. From there, this facet of Spider-Man’s story has expanded to video games, comics, and motion pictures, with plenty more to come.

Ask Spidey fans of a certain age which version of the character they first fell hard for and they’ll tell you the Spider-Man animated series that ran on FOX in the mid-90s (and can be found these days on Disney+). Though the character had appeared in previous animated shows — and even a few live-action versions — this one ran for five seasons, racking up a grand total of 65 episodes that went a long way to introduce Peter Parker and his expanded world to a new audience during a time when the comics themselves were already dealing with about 30 years of continuity.

Eventually, after introducing all of Spidey’s most prominent villains and allies, the creators began doing longer form arcs playing out across the seasons. With Season 5, Spider-Man got swept up in the show’s version of the classic “Secret Wars” story wherein the Beyonder brought together heroes and villains to prove whether good or evil was superior. This three-episode arc set-up the two part finale called “Spider-Wars.”

Parker impressed the Beyonder so much that he was sent to another reality where the Ben Reilly clone of Peter Parker bonded with Carnage, joined forces with a group of villains, destroyed NYC and threatened to do the same to the multiverse. Beyonder introduced the main Wall-Crawler to alternate versions of himself, many inspired by Spider-Man comic book stories from the past, including one with multiple arms, one in silver armor, one with Doctor Octopus’ arms, the Scarlet Spider and an actor playing Spider-Man in his world. They saved the multiverse, as you might expect, and the series ended with Spidey having a heart-to-heart with Stan Lee before heading off with Madame Web to find the missing Mary Jane. In a way, this story started spinning the web that makes up the Spider-Verse.

While going after Mysterio, the Amazing Spider-Man accidentally broke the Tablet of Order and Chaos, sending the shards into four dimensions including his own. Each reality, as you might expect, had its own Spider-Man and they were all brought together by Madame Web, in a move right out of “Spider Wars.” Each piece of the tablet gave the person who found it incredible power regardless of their thoughts on responsibility. All four worked to get the pieces, restore the Tablet and set everything right in their own worlds.

The following year, Shattered Dimensions was sequalized in Spider-Man: Edge of Time. In that game, written by comic scribe Peter David, Amazing Spider-Man and his 2099 counterpart, Miguel O’Hara — who was created by David for the comics — fight in each others’ times after the Alchemax of the future figures out time travel.

The idea of bringing all sorts of different Wall-Crawlers together clearly made an impact on Dan Slott, who eventually became the sole shepherd of Amazing Spider-Man. In 2014, the term “Spider-Verse” entered the lexicon thanks to the huge event launched in that comic. As the story goes, all realities are connected by the Great Web and contain a Spider Totem, a being with arachnid abilities. A villain named Morlun and his people, the Inheritors, traverse the Web in search of Totems who they devour to keep themselves powerful.

After Morlun declared war on all spiders, the main Marvel Universe Spider-Man (from Earth-616) teamed up with arachnid heroes from a multitude of realities to stop the Inheritors. Slott and his co-conspirators went a long way to fill these ranks out with other Earth-616 heroes like Spider-Woman and Silk, existing alternate reality characters like Miles Morales, Spider-Man 2099 and Spider-Gwen (now known as Ghost Spider), brand new ones like Spider-Punk and Spider-UK, and versions from preexisting media like Mangaverse Spider-Man and even the star of the late 70s Japanese TV show!

Even though Earth-616 Spider-Man made his way back to his homeworld after saving the Great Web, this would be far from his last interaction with other versions of himself.

Launching in 2012 on Disney XD, Ultimate Spider-Man gave a new generation of kids the chance to get to know a new version of the Web-Spinner. Created by the group Man of Action Entertainment — the same comics-turned-animation folks who came up with Ben 10 — this series used the comics as a jumping off point, but went in a variety of new directions.

For instance, in Season 3, they produced a four-parter called, you guessed it, “The Spider-Verse.” In this version, though, the Green Goblin traveled to six different realities to obtain DNA from half a dozen Spider-Beings that he then injected into himself in order to become Spider-Goblin. While trying to stop the villain, the Peter Parker encountered Spider-Man 2099, Spider-Girl, Spider-Man Noir, Spider-Ham, Spyder Knight and Miles Morales, who all came back in the end to help him stop the souped-up villain.

In the following season, a botched plan by Doctor Octopus and Baron Mordo lead to Miles Morales getting stranded on Peter’s Earth. Later that same season, another four-parter called “Return to the Spider-Verse” debuted. Much like the plot to Shattered Dimensions, the Siege Perilous — the object that allowed for inter-dimensional travel the first time around — had been broken, with its pieces going to different realities and threatening to destroy them all. Spidey and Miles — now going by Kid Arachnid — went after them, experiencing new and old versions of themselves along the way, including the evil Wolf Spider and fellow hero Spider-Gwen!

Never ones to hold off on resurrecting a good idea, Marvel flipped the script on all of their comics in 2015 by destroying, well, almost everything. In the mega-crossover Secret Wars, Doctor Doom grabbed a bunch of power and used it to pull together pieces of broken realities to create Battleworld. While the main story played out in that book, the company replaced all of its normal titles with new limited series’ and one-shots set in these different zones, including Spider-Verse!

With only the fuzziest of memories about their previous lives, characters like Spider-Woman (Gwen Stacy), Spider-Man: India, Spider-UK, Spider-Ham, Spider-Man Noir and Spider-Girl (Anya Corazon) came together to take on a version of the Sinister Six run by Norman Osborn.

When Secret Wars ended, Marvel took the opportunity to make a few changes, though one of the biggest was making it so that Miles Morales now lived on Earth-616, where he could learn more about life as Spider-Man under the mentorship of the original version of Peter Parker. At the same time, a Web Warriors title launched which focused on a group of alternate dimension spider-folk protecting various realities. This group was well in place when, in 2018, the Inheritors made their reappearance thanks to a botched cloning experiment by Otto Octavius on Earth-616, resulting in another epic crossover called Spider-Geddon. For even more cross-reality team-ups, check out the 2019 Spider-Verse series which sets Miles Morales up as the star, probably because of something else that happened in 2018…

Spider-Man: Into the Spider-Verse

Alternate realities might be commonplace in comics, cartoons and even TV shows, but with Spider-Man: Into The Spider-Verse’s 2018 release, a huge portion of the movie-going public, young and old, got a crash course in the concept as well. In that film, teen Miles Morales already had enough to worry about between getting bitten by a radioactive spider and witnessing the death of his world’s Spider-Man. Then you mix all that in with the fact that the hero perished trying to stop Kingpin’s Super-Collider, which was built to open doors to other realities. Well it certainly worked as the burgeoning hero found himself hanging out with Peter B. Parker, Spider-Woman (Gwen Stacy), Peni Parker, Spider-Ham and Spider-Man Noir.

This group figured out a way to work together in an effort to stop the assembled villains and save themselves from deteriorating in a universe not their own. Even with the day saved, there was still a tease of other action in other universes. Spider-Verse was a big hit and incredibly well received (Academy Award win included), landing with viewers of all ages and easily spawned the aforementioned sequel, Spider-Man: Across the Spider-Verse (Part 1), which is currently aiming for a November 2022 release. The details are still pretty foggy at this point, but the trailer shows Miles reuniting with Gwen and also mixing it up with Spider-Man 2099 across multiple realities.

Of course, Across the Spider-Verse is neither the next Spider-Man movie to come out nor the next one to focus on intersecting realities! That distinction goes to No Way Home, which bows this month. The trailers have let us know that Peter Parker asks Dr. Strange for help in making the world forget his secret identity. The kid interrupts the spell which screws up time and brings about the villains from previous film versions originally seen in Spider-Man, Spider-Man 2, Spider-Man 3, Amazing Spider-Man and its sequel.

Of course, with actors like Alfred Molina, Jamie Foxx and Willem Dafoe on the way back, two other big names have been on fans’ minds: Tobey Maguire and Andrew Garfield. The stars of the previous two wall-crawling franchises have been rumored to come back and interact with Tom Holland.

At this point, regardless of who exactly pops up or how big of a part they’ll play in the proceedings, we’re excited to see how it stacks up to all of these other spider-jamborees!

Click below to get a look at just how detailed Spider-Man-inspired Hot Toys figures can be.