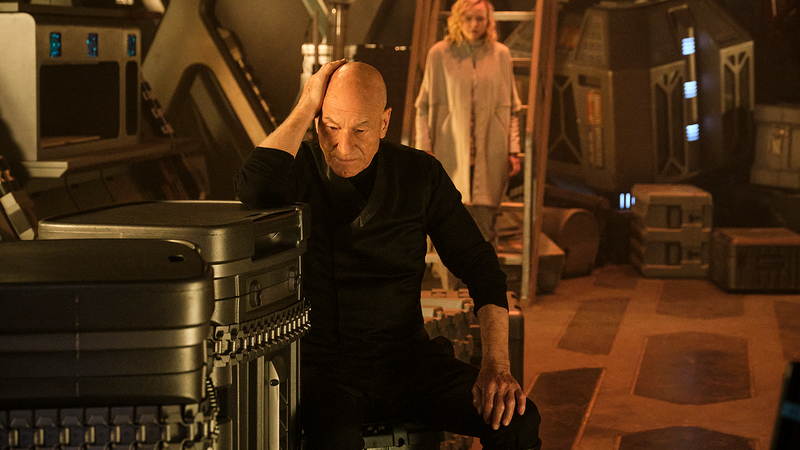 Star Trek is a franchise that endlessly redefines the sci-fi genre, with each new iteration of the franchise boldly pushing the envelope further to capture the hearts, minds and imaginations of ‘Trekkies’, old and new alike. Star Trek: Picard (now in its second season) continues this legacy.

Exclusive to Prime Video in Australia and New Zealand, episodes of Star Trek: Picard season two have been dropping each Friday evening since March 4 — with four episodes now available and another one due this week. Season one of the series saw the iconic Star Trek: The Next Generation (TNG) character, Jean-Luc Picard (played by Sir Patrick Stewart) coming out of a 14-year retirement from Starfleet and building a rag-tag crew of allies, both new and familiar (including TNG‘s Riker and Star Trek: Voyager‘s Seven of Nine).

After season one’s explosive finale, which saw a seismic shift in Picard’s character journey, season two is set to pave the way for an entirely new outlook on Picard and marks the return of even more familiar fan-favourites such as the enigmatic Guinan (played by Whoopi Goldberg) and the omnipotent trickster, Q (played by John de Lancie). While time-travel is no new concept for Star Trek, season two of Picard changes directions from the first, where Jean Luc’s assembled team is fighting to right the timeline after Q’s latest meddling.

Star Trek has come a long way and it’s clear the franchise still has much life left in it. And it’s by taking a look at the history of Star Trek that we can see not only its influence on sci-fi as a whole, but also find clues as to where the likes of Star Trek: Picard season two might boldly go to next.

Episodes of Star Trek: Picard season two will drop each Friday evening from March 4 through May 6 on Prime Video in Australia and New Zealand.

To Have Boldly Gone

The debut of Gene Roddenberry’s original 1996 Star Trek series brought with it a fresh take on what sci-fi was capable of. Perhaps most telling of the time was the diverse cast that made up the crew of the USS Enterprise, and while it didn’t always get everything right, it was a breath of fresh air for viewers, that helped to make sci-fi consistently more diverse as a genre and, in some cases, even shatter social expectations entirely.

Whoopi Goldberg, who reprises the role of Guinan in the second season of Picard, has said that seeing a Black woman sitting on the bridge of a starship (and not working as a maid) was formative for her as a young girl. She’s admitted that joining the cast of TNG was a dream come true, revealing on The View that, “For me, it defined a very, very positive time in my life,” and being invited by Stewart to join the cast of Picard season two was a thrill.

Star Trek’s cultural influence is also unmistakable, but it’s the influence on storytelling that has helped it to stay relevant, even now; the franchise uses its futurist setting to tackle more sophisticated stories that explore morality, racism, sexism, ethics, and politics to name just a few. Issues that mirror our real-world ones with Star Trek’s vast universe of aliens and their often-complex cultures as stand-ins for us in the real world.

Star Trek’s willingness to tackle complex and even difficult social issues is a long-standing theme that is truly idiomatic of the show’s nature of discovery and exploration — and as the franchise continues to evolve, there is one series in particular that has come to help define the identity and heart of Picard.

The Next Generation and Beyond

Star Trek: The Next Generation (TNG) was our first introduction to Jean-Luc Picard, as the no-nonsense but morally ethical captain of the USS Enterprise. Fans have long debated whether the original Star Trek series or its successor TNG is the better show, but regardless of what side you land on, it’s clear that both left a sizeable impact on the franchise.

The original Star Trek helped it define its world of humanity thriving in the 23rd century, while both TNG and the first season of Star Trek: Picard are set in the vastly different 24th century. Season two of Picard sees Jean-Luc taking on a whole new era, with the crew displaced by Q back into the 21st century. In the same way the original Star Trek built a strong ensemble of characters and archetypes, TNG widened the scope further, helping to define the larger in-universe itself and introduce notable series mainstays like the Borg and the Ferengi races respectively.

The Borg, a terrifying race of cybernetic-humanoid, that operate as a hive-mind, forcibly assimilate unfortunate humanoid organic beings into their ever-expanding ranks. Since their debut, the Borg have made numerous appearances throughout the franchise, but it’s TNG and the special relationship built around them and Jean-Luc Picard that helped fuel some of TNG’s most enticing episodes. This is a theme that plays out again in the newest extension of the franchise, with Star Trek: Picard season two.

Having briefly assimilated Picard into their ranks at one point, they are one of few antagonistic entities in the series able to expose cracks in Picard’s overwise stoic nature. The Borg Queen returns in Picard season two, coming face-to-face with both Picard and former Borg drone, Seven of Nine.

The central plotline in season two of Star Trek: Picard is Q changing history and rewriting the Prime timeline to instate a xenophobic authoritarian regime, replacing Jean-Luc’s Federation with the Confederation. When Q altered the timeline, Seven’s entire existence is thrown into turmoil and, in this world, she was never a Borg and is 100 per cent human. Since Seven no longer has Borg facial implants, this is also the first time she is living without the discrimination that comes with being a Borg. The big question in season two is whether she will decide to fight for her human existence, which would see her coming up against Jean-Luc and his crew to stop them from reversing Q’s timeline alterations. Will she become a central “villain” in this season of Star Trek: Picard? Only time will tell.

Star Trek’s influence on sci-fi as a serious tool for telling relatable, yet far-reaching, mature stories, paving the way for many of the movies and shows that we love today. But what’s most fascinating is how it has come to influence its own future with the creation of new shows like Star Trek: Discovery, Star Trek: Lower Decks and Star Trek: Picard. Not to be retrained by the past, but to use it as a tool of reinvention, we’re excited to see if the second season of Picard will cement itself among the pantheon of its beloved predecessors, in the eyes of both the fans and the critics.

The first three episodes of Star Trek: Picard season two are now available to watch on Prime Video in Australia and New Zealand, with new episodes dropping every Friday night from March 4 through May 6. Fans can also revisit Star Trek: The Next Generation and other series in the Star Trek franchise on the Paramount+ channel, which is available on Prime Video with an add-on subscription.